MIT researchers are attempting to push the boundaries of robots’ fine-motor skills.

A new bot invented by MIT’s Computer Science and Artificial Intelligence Laboratory (CSAIL) can use an automated gripper to perform tasks that usually involve a level of finesse only suitable for humans, such as manipulating ropes and cables.

In a demonstration, the hand was able to perform a range of tasks that are usually extremely difficult for robots, including detangling wires, plugging in USB cables, and more.

Eventually, researchers hope that as the sophistication of the robot and its software increases, it will be able to carry out more complex tasks like tying knots, folding laundry, or even stitch someone’s sutures.

Part of what enables the bot to complete more dextrous tasks are two soft pads place on its grippers.

Inside the grippers are sensors that can feel and detect objects’ shape while maneuvering them.

The grippers are the basis of a technology called ‘GelSight’ that uses tiny sensors inside the rubber pads to glean information such as how the object is situated and how much force is being applied. 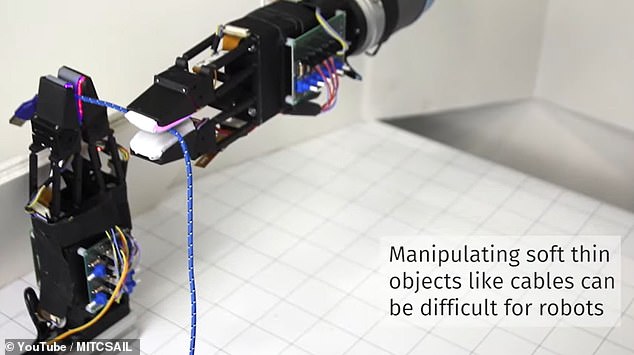 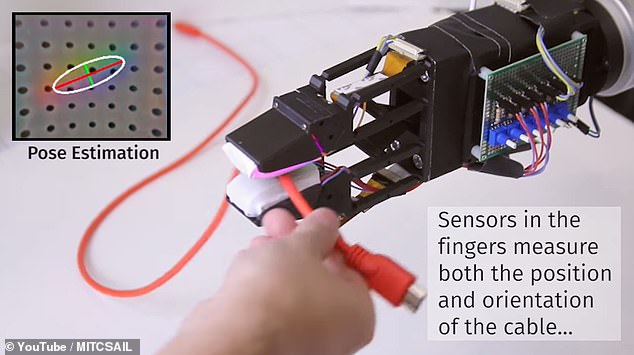 The result is a similar process to how humans use their fingers to perform similar skills.

According to researcher, Yu She, the goal of developing such a robot is to replace human work that may be dangerous our ‘repetitive.’

This would free up humans to do more complex jobs according to She and could help prevent human injury.

The team will look at applying the bot in the automotive industry which uses human labor for a significant portion of the wire threading work in cars.