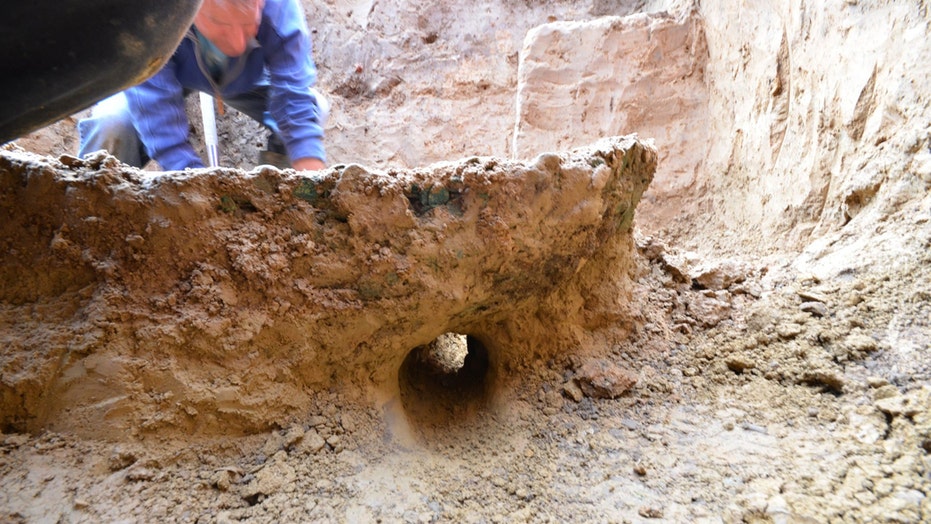 A "monumental temple complex" that dates back to the Iron Age and several buildings that housed the early kings of Ulster may be hidden underground at Navan Fort, according to a newly published study.

The research suggests that Navan Fort was of great importance religiously. Navan Fort, located in County Armagh, Northern Ireland, is "one of Ireland’s most famous and important archaeological sites, the legendary Emain Macha," according to an Armagh travel website. LiveScience notes it was the capital of Ulster in pre-Christian Ireland, LiveScience reported.

"Historical texts imply that these Iron Age complexes became enduring symbols of power for early medieval societies, and royal centers for overkings," the researchers wrote in the study's abstract. "These references, alongside the incredible scale of these landscapes, have encouraged intensive research, but only recently has non‐invasive survey begun adding new data and facilitating new interpretations. Prior to the present study, discussion of Navan Fort was limited to the results of small‐scale but iconic excavations."

The researchers continued: "These new discoveries significantly change understandings, adding spectacular new monumental phases, and facilitating re‐assessment of Navan’s role within both later prehistoric and medieval society, as well as of the nature of ceremonial landscapes and their role in developing sacral kingship in northern Europe."

The structures were spotted with LiDAR (to map the ground), which is also used in autonomous cars, photogrammetry (for aerial photos to give depth), magnetic gradiometry, (to trace magnetic changes in the soil) and electrical resistance, for measuring electrical patterns in the soil, LiveScience added.

It's unclear exactly what is left of the ruins, but the archaeologists are excited about the findings, nevertheless.

“Excavation in the 1960s uncovered one of the most spectacular series of buildings of any region of prehistoric Europe, including a series of figure-of-8 buildings of the Early Iron Age and a 40m timber-ringed structure constructed c.95 BC," study co-author Dr. Patrick Gleeson said in a statement. "Upon the latter’s construction, it was immediately filled with stones and burnt to the ground in order to create a massive mound that now dominates the site.

"Our discoveries add significant additional data, hinting that the buildings uncovered in the 1960s were not domestic structures lived in by kings, but a series of massive temples, some of the largest and most complex ritual arena of any region of later prehistoric and pre-Roman Northern Europe."

Researchers have looked at Navan Fort previously, both in the 1960s, as Gleeson alluded to, and in the 1990s. So far, they've uncovered what are known as "figure-of-eight buildings," including one that is 130 feet tall, making it the largest structure ever found in prehistoric Ireland, Gleeson told LiveScience.

The researchers noted that further study is needed to provide greater insight into the medieval kings of Ulster.

"The work has shone new light on the monument, and will inform further research as we explore what Navan Fort meant to our forebears and how they used the site, for years to come," Dr John O’Keeffe, Principal Inspector of Historic Monuments in the Department for Communities, said in the statement. "It provides additional insights that inform visits to this enigmatic monument and landscape today.”

The study was published in the Oxford Journal of Archaeology.

A number of Iron Age finds have been discovered in recent memory. In February 2019, researchers found more than 100 fragmented human skulls buried in an open area of Le Cailar, France — a 2,500-year-old town on the Rhone River.

Researchers gathered evidence in May 2019 that Iron Age Celts drank Mediterranean wine as far back as 2,700 years ago. Separately in May 2019, an Iron Age shield made from bark, the first of its kind found in Europe, was analyzed by researchers.

In July 2019, researchers unearthed the grave of a Celtic female who was buried in approximately 200 B.C. in a tree coffin and adorned with precious jewelry.

In February, 70,000 coins from the Iron Age that were discovered in 2012, set a Guinness World Record for being the largest of its kind discovered in the British Isles.

The Iron Age was preceded by the Stone Age and the Bronze Age and lasted between 1200 B.C. and the 1st century A.D., depending upon the region of the world.