Follow
Home » Science » The ‘mother of all lizards’ revealed

The ‘mother of all lizards’ revealed

The ‘mother of all lizards’: Fossil of a strange chameleon-sized creature that roamed the Earth 240 million years ago rewrites the reptile family tree

Scientists believe they have found the ‘mother of all lizards’ in the Italian Alps.

Researchers found fossils of a lizard that lived some 240 million years ago, when the continents were fused together into a single landmass and the reign of the dinosaurs had only just begun.

Dubbed Megachirella, the creature is believed to be the ancestor to all modern lizards and snakes, a group known as squamates.

Megachirella proves that squamates had split from other ancient reptile species before the Permian-Triassic Boundary extinction, which occurred around 252 million years ago.

Until now, scientists believed squamates arose after the disaster. 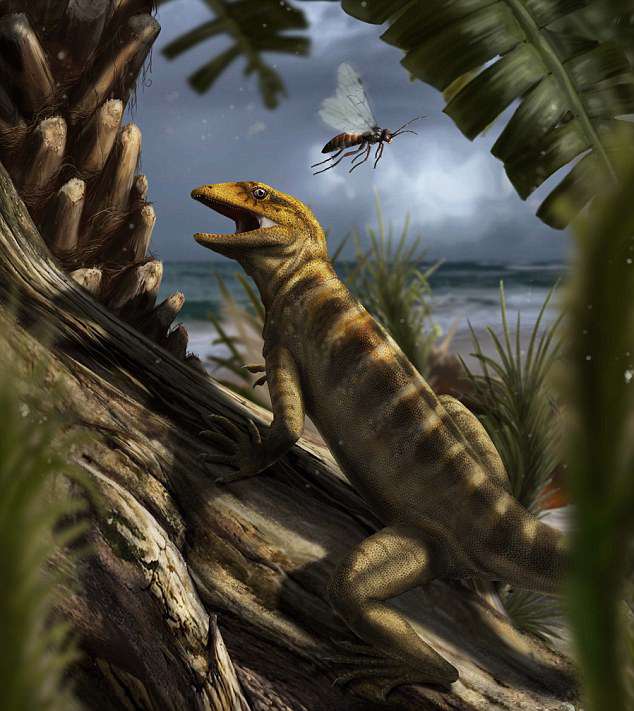 According to the latest research, this small chameleon-like reptile, known as Megachirella, was the ancestor to all modern lizards and snakes, a group known as squamates. Megachirella proves that squamates split from other reptile species before the Permian-Triassic extinction

Megachirella was first unearthed 20 years ago by an amateur collector.

The fossilised remains, which were discovered buried in compacted sand and clay layers in the Dolomites mountain range in north east Italy, were initially classified as a close lizard relative.

However, Tiago Simoes, co-author of the new study published in the science journal Nature, had some concerns about the classification of the 240 million year-old remains.

The University of Alberta researcher said: ‘When I first saw the fossil I realised it had important features that could link it to the early evolution of lizards.’

Simoes brought together a team of colleagues from around the world to perform a more detailed analysis of the tiny skeleton, which measures 25-30cm (9-11 inches) from its nose to its tail.

The researchers used an x-ray technique known as CT-scanning to examine parts of the fossil that were previously hidden in the rock. 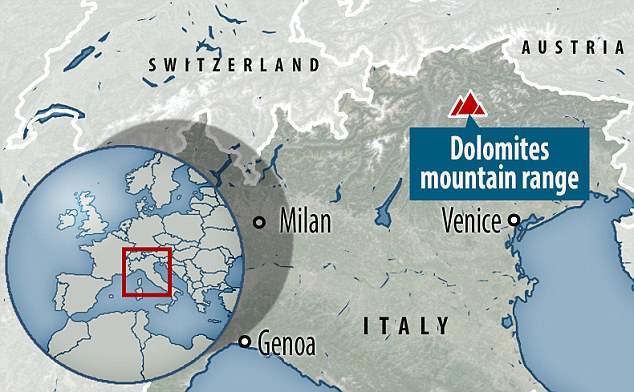 Megachirella was first unearthed by an amateur collector in the Dolomites in the early 2000s. The fossil was incorrectly labelled as close lizard relative

Researchers used CT scanning to uncover a small bone in Megachirella’s lower jaw, which is unique to the squamate family. The fossil was wrongly classified when it was first uncovered in the early 2000s as the jaw bone was hidden inside the rock

‘We are sure it’s a lizard by the particular combination of features,’ said Simoes.

One of the characteristics was a small bone in Megachirella’s lower jaw, which is unique to the squamate family.

Other features include the shape of bones in the brain, shoulder and trunk of the fossil.

Simoes and his team spent 400 days visiting and examining some 150 specimens of ancient lizard-like animals in collections around the world.

The researchers also analysed skeletal and molecular data, including DNA, from living squamates.

Simoes’ colleague and study co-author Michael Caldwell likened the Megachirella fossil to ‘a virtual Rosetta Stone in terms of the information it gives us on the evolution of snakes and lizards.’

The stone, discovered in Egypt, allowed scientists to decipher hieroglyphics for the first time.

There are more than 10,000 squamate species living today, ‘yet we’ve really had no real understanding of where they came from in terms of their evolutionary history,’ Caldwell said.

For Simoes, the correct classification of Megachirella is about more than just the history of lizards.

He said: ‘We currently suffer a crisis in the world of lack of confidence in scientific evidence and facts. Denial of scientific information has been increasing and replaced by alternative facts not backed up by science.

‘This study, along with others that try to understand fundamental aspects of evolution… will hopefully draw back people’s curiosity and attention to the natural world and how it has been changing for hundreds of millions of years.’

WHAT WAS THE PERMIAN MASS EXTINCTION?

Around 248 million years ago the Permian period ended and the Triassic period began.

The Permian mass extinction has been nicknamed the ‘The Great Dying’ as nearly all life on Earth was exterminated.

A staggering 96 per cent of all life on the planet was destroyed.

All life on Earth today is descended from that existing four percent of species.

The cause of the mass extinction remains unclear to scientists, although it is thought to have lasted anywhere between 20,000 years to millions years.

It is thought that it was a period of time with lots of volcanic activity which may have contributed to the extinction.

The eruptions may have depleted the ozone layer – which protects the planet from damaging UV radiation.

This high-energy form of radiation can cause significant damage to living things.