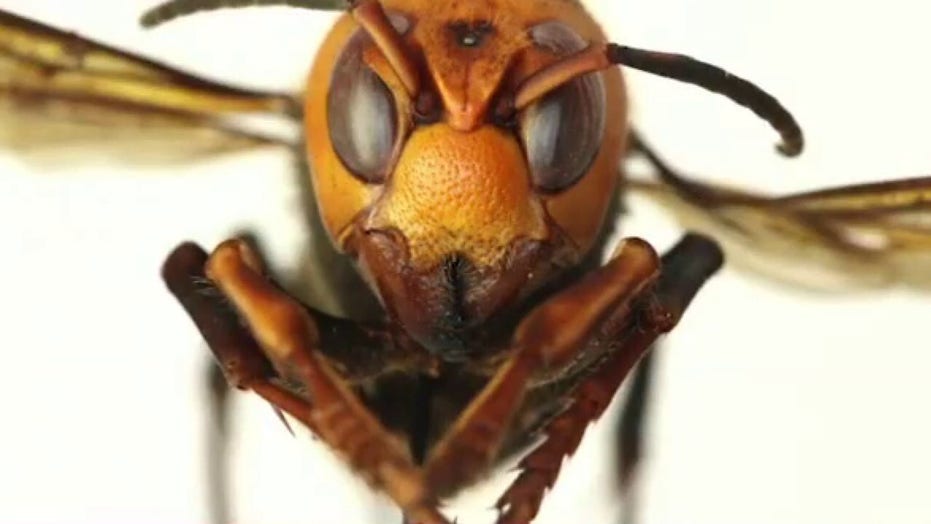 That’s one small step for man, one giant vacuum ride toward oblivion for hornet-kind.

Space-suited bug specialists successfully vacuumed up a nest of so-called “murder hornets” in Washington state on Saturday, capping a months-long effort to swat back the invasive, bee-slaughtering pest.

“Got ’em,” the Washington State Department of Agriculture tweeted on Saturday afternoon, alongside photos of their efforts.

“Vacuumed out several #AsianGiantHornets from a tree cavity near Blain this morning,” the tweet read.

The basketball-sized nest was hidden inside the hollow of a tree, in woods two hours north of Seattle, officials said.

It is the first nest of the 2-inch-long, venomous insects — real name “Asian giant hornets” — to be successfully located after almost a year of worrisome individual sightings near the British Columbia border.

The state’s effort began with the trapping of three hornets — and the task of keeping them alive with strawberry jam long enough for the next steps. 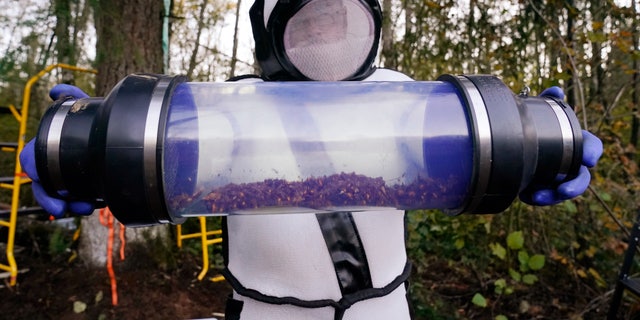 Sven Spichiger, Washington State Department of Agriculture managing entomologist, displays a canister of Asian giant hornets vacuumed from a nest in a tree behind him Saturday, Oct. 24, 2020, in Blaine, Wash. (Associated Press)

The hornets then had to be tracked back to their nest, which was well-hidden inside the cavity of a tree.

One bug was lost entirely in the process, causing some concern. 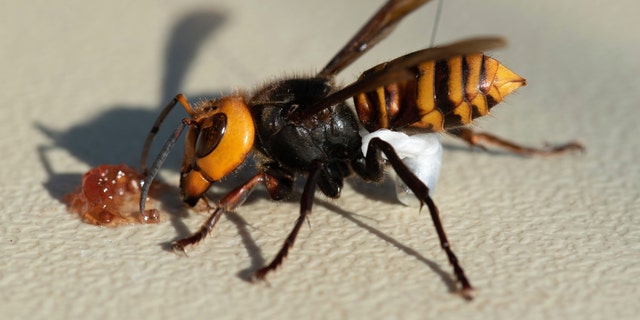 Given that the hornets have venomous, 6-millimeter-long stingers, entomologists had to dress in thick protective suits for the next part.

They sealed the cavity with foam, covered it with plastic wrap, and then inserted a tube inside to suck the buggers out into a collection chamber. 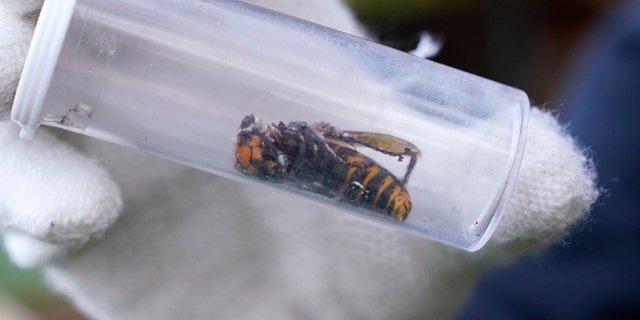 “We extract them alive,” explained state entomologist Erik Spichiger. “We will kill them.”

The tree will next be cut down in order to extract and kill the larvae and, ideally, find the queen — so long as she hasn’t high-tailed it out of there already to start a new hive. 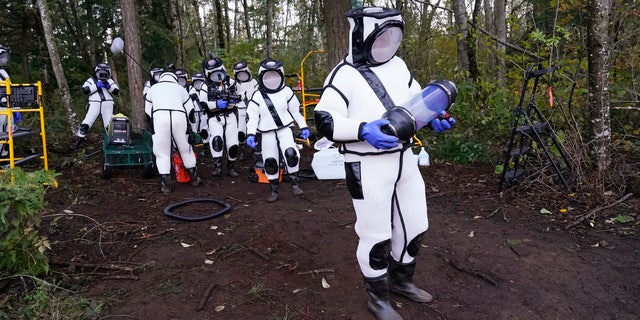 Sven Spichiger, Washington State Department of Agriculture managing entomologist, walks with a canister of Asian giant hornets vacuumed from a nest in a tree behind him Saturday, Oct. 24, 2020, in Blaine, Wash. (Associated Press)

The murder hornets — named for their ability to decimate a hive of bees in a matter of hours — first appeared near Blaine in Washington state in December, 2019. They have destroyed six or seven hives in the area.

The species is normally found in China and other Asian countries, where their stings kill about a dozen people a year. It’s unknown how they got to North America.

from, hornets, Murder, vacuumed, W
You may also like: