NASA creates ‘cosmic ray gun’ that simulates a radiation environment in a lab, allowing scientists to study the effects of high-energy particles on astronauts before they head to Mars

Scientists have raised concerns over how galactic cosmic rays would affect astronauts on deep space missions, as it can cause dementia and permanent memory loss.

NASA has designed a machine that simulates the rays by combining protons, helium ions and heavier ions to create a radiation environment.

The gun-like instruments was first used used on mice, which received acute and chronic doses while in cages.

The American space agency hopes the technology will help them better understand the risks of human exploration to the moon, Mars and beyond. 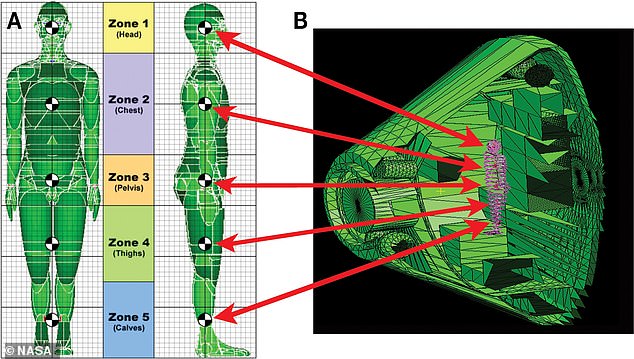 NASA has designed a machine that simulates the rays by combining protons, helium ions and heavier ions to create a radiation environment. The American space agency hopes the technology will help them better understand the risks of human exploration to the moon, Mars and beyond

Galactic cosmic rays comprise a mixture of highly energetic protons, helium ions, and higher charge and energy ions ranging from lithium to iron, and they are extremely difficult to shield against.

These ions interact with spacecraft materials and human tissues to create a complex mixed field of primary and secondary particles.

NASA has revealed that it has, for the first time, developed fast beam switching and controls system technology to recreate galactic cosmic rays (GCR) in a laboratory.

‘Historically, most research on understanding space radiation-induced health risks has been performed using acute exposures of monoenergetic single-ion beams,’ the researchers shared in a study published in the journal PLoS Biology.

However, the space radiation environment consists of a wide variety of ion species over a broad energy range. Using the fast beam switching and controls systems technology recently developed at the NASA Space Radiation Laboratory (NSRL) at Brookhaven National Laboratory, a new era in radiobiological research is possible. 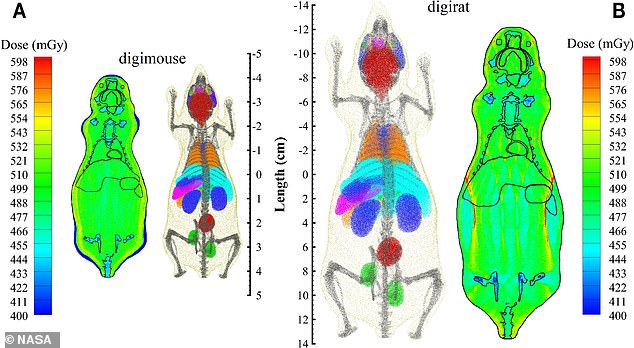 The gun-like instruments was first used used on mice, which received acute and chronic doses while in cages

The device allows scientists to choose the amount of radiation that is beamed at the specimens.

The GCR simulator is designed to hit mice and rats at critical locations that would be similar to how they would on the human body.

The beams, which can measure 60×60 centimeters square, are able to be focused on a target area to deliver a dose of space radiation as researchers see fit.

The first experiment using the simulator was conducted in 2018, where thirty-three unique ion-energy beam combinations were delivered in rapid sequential order (under 75 minutes), cumulatively mimicking the GCR environment experienced by shielded astronauts on a deep space mission.

A few months later, the team used the device on animals for the first time over the period of four weeks to investigate how the quality and dose-rate effects risks of radiogenic cancers, cardiovascular disease, and adverse effects on the central nervous system.

NASA also said the technology can be tested on materials, allowing them to understand how rockets and space suits may be affected by the high-energy particles. 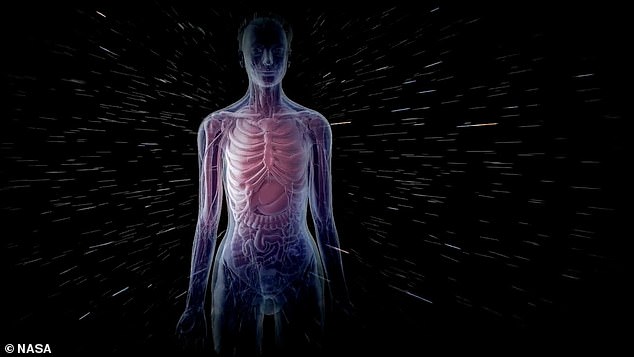 The beams, which can measure 60×60 centimeters square, are able to be focused on a target area to deliver a dose of space radiation as researchers see fit

The results of these early experiments are yet to be published, but the authors suggest the first run of the cosmic ray simulator will allow them to plan for future operations.

Deep space travel is a dream of many scientists and the GCR simulator is part of their master plan to achieve it.

Previous studies have warned about the effects astronauts could encounter will traveling millions of miles from Earth – on in particular is deemed ‘space brain.’

They believe astronauts on deep space missions could suffer from dementia and permanent memory loss as cosmic rays bombard and damage their brains.

The study looked at exposure to highly energetic charged particles in rodents.

This resulted in cognitive impairments and dementia.

Professor of of radiation oncology Dr Charles Limoli said: ‘This is not positive news for astronauts deployed on a two-to-three-year round trip to Mars.

‘Exposure to these particles can lead to a range of potential central nervous system complications that can occur during and persist long after actual space travel – such as various performance decrements, memory deficits, anxiety, depression and impaired decision-making.’

‘Many of these adverse consequences to cognition may continue and progress throughout life.’

Astronauts journeying to Mars would likely be bombarded with 700 times the levels of radiation experienced on Earth.

Even on the International Space Station, astronauts are exposed to 200 times more radiation as a result of their work than would be experienced by an airline pilot or a radiology nurse.

If a burst of space radiation is detected, mission control in Houston, Texas, can instruct astronauts to abort space walks, move to more shielded areas of the orbiting laboratory and even adjust the station’s altitude to minimise any health impacts.

Solar flare activity can cause acute radiation exposure effects — such as changes to the blood, diarrhoea, nausea, and vomiting — which can be recovered from, and other impacts that are non-reversible and/or fatal.

This can increases the risks of cancer, generate cataracts and cause sterility.

It can also cause damage to the brain, central nervous system and heart, paving the way for various degenerative diseases.

DNA changes from space radiation can even be passed on to subsequent children.