The historic mission saw NASA’s OSIRIS-REx spacecraft briefly tag the asteroid more than 200 million miles from Earth. On Tuesday, October 20, OSIRIS-REx unfurled its robotic arm and plummeted hundreds of feet towards a designated landing spot the size of a small parking lot. OSIRIS-REx then made contact with Bennu for about six seconds, scooping up dust and rock samples for return to Earth.

The collected samples are now expected to reach Earth by 2023, for NASA, and the end of this year for JAXA.

Scientists believe rocky material will shed light on the building blocks of the solar system as these ancient asteroids took shape billions of years ago, before life as we know it began. 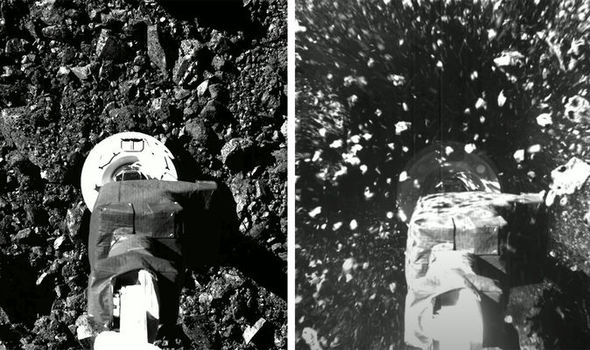 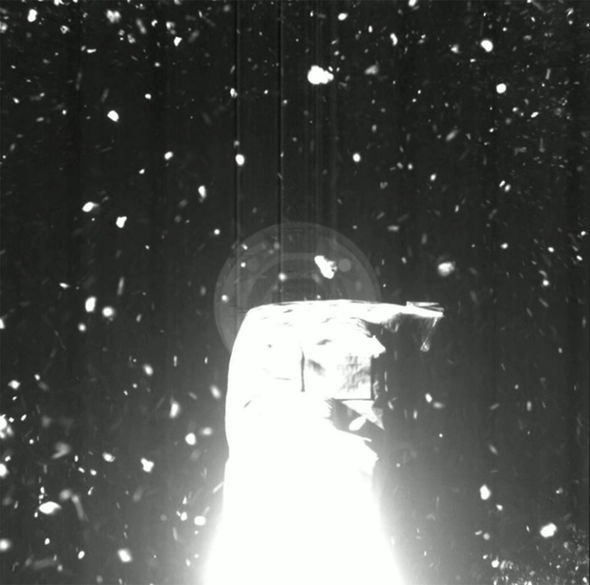 The lower half of the images is dominated by the spacecraft’s sampling arm, the Touch-And-Go Sample Acquisition Mechanism (TAGSAM).

The arm’s round head was the only part of the spacecraft that touched the asteroid, making contact for about six seconds.

And at the time of contact, the spacecraft was approaching Bennu at about 0.2mph and then retreated at about 0.9mph.

NASA said: “In the middle of the image sequence, the sampling head positions itself to contact the asteroid’s surface head-on.

“Upon initial contact, the TAGSAM head appears to crush some of the porous rock underneath it.

“One second later, the spacecraft fires a nitrogen gas bottle, which mobilises a substantial amount of the sample site’s material.”

NASA’s spacecraft was instructed to touch down in Nightingale, a relatively clear patch of surface measuring less than 100 square yards – the equivalent of five parking lot spaces.

“The team is busy analyzing what’s likely to be NASA’s first asteroid sample.

Asteroid Bennu itself is estimated to measure about one-third of a mile across its equator, meaning it is about as wide as the Empire State Building is tall.

The space rock completes a lap around the Sun every 1.2 years and a day on Bennu only lasts 4.3 hours. 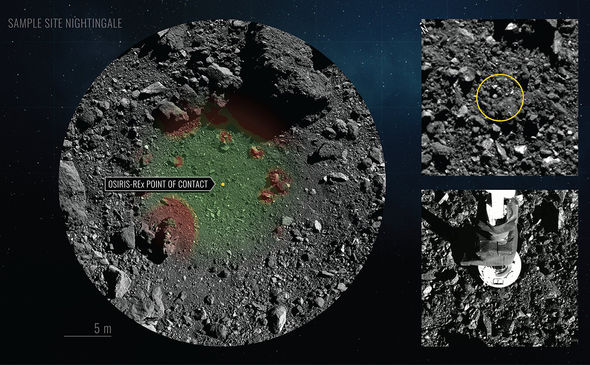 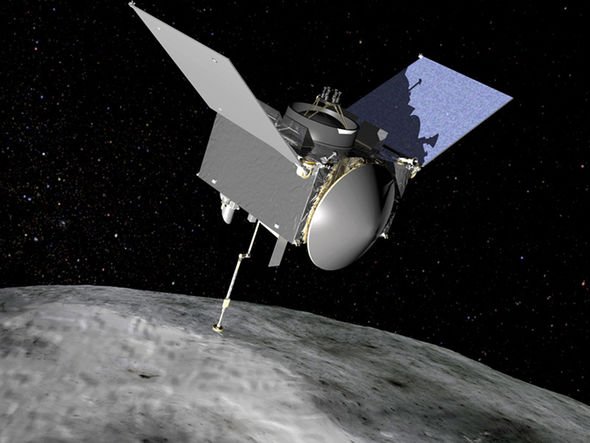 Bennu most likely broke off from a much bigger, carbon-rich asteroid 700 million to two billion years ago.

NASA’s astronomers believe it formed in the Main Asteroid Belt between Jupiter and Mars but has drifted further into the system since.

NASA said: “Bennu is thought to be a ‘rubble pile’ asteroid, meaning smaller fragments from the original large asteroid came together to form Bennu.

“The small pieces of Bennu stay together because of gravity and another force scientists call ‘cohesion,’ which makes soils and sands stick together.”

And yet, between 20 and 40 percent of the asteroid is believed to be empty space.

However, it remains to be seen how much valuable material OSIRIS-REx has collected.

Dante Lauretta, OSIRIS-REx principal investigator at the University of Arizona in Tucson, said: “After over a decade of planning, the team is overjoyed at the success of today’s sampling attempt.

“Even though we have some work ahead of us to determine the outcome of the event – the successful contact, the TAGSAM gas firing, and back-away from Bennu are major accomplishments for the team.

“I look forward to analyzing the data to determine the mass of sample collected.”

The creator of AstraZeneca's coronavirus vaccine is a mom to triplets. Her children participated in the trial.