The “space butterfly” is a beautiful, red nebula of gas and dust drifting aimlessly through the void of space. Officially designated W40, the butterfly was spotted by NASA’s Spitzer Space Telescope about 1,400 light-years from Earth – some 8,230,075,500,000,000 miles. Nebulae are colossal clouds of gas, which are typically hotbeds for the formation of new stars. Some nebulae are the remnants of supernova eruptions when a star in its final death throes erupts vast amounts of material into space.

Nebula W40 is of the former kind, where new stars are born.

NASA said: “What looks like a red butterfly in space is in reality a nursery for hundreds of baby stars, revealed in this infrared image from NASA’s Spitzer Space Telescope.

“Officially named W40, the butterfly is a nebula – a giant cloud of gas and dust in space where new stars may form.

“The butterfly’s two ‘wings’ are giant bubbles of hot, interstellar gas bowling from the hottest, most massive stars in the region.” 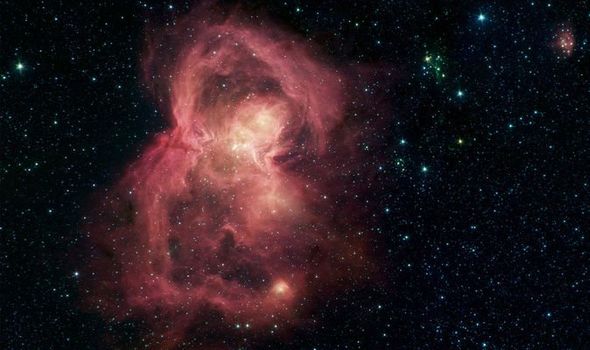 The cosmic material in the nebula’s wings was ejected from a source of bright stars at the centre of the cloud.

According to NASA, the hottest of these burning stars is W40 IRS 1a right in the middle of the nebula.

At 1,400 light-years from our own Sun, the star cluster is roughly the same distance from us as the famous Orion nebula.

But when seen from Earth, the two cloud clusters appear to be almost exactly 180-degrees apart in the night skies.

Both nebulae are some of the nearest star-forming regions of space, in which stars 10 times heavier than our Sun were observed to be forming.

NASA said: “The W40 star-forming region was observed as part of a Spitzer Legacy Survey and the resulting mosaic image was published as part of the MYStIX, Massive Young stellar clusters Study in Infrared X-rays, survey of young stellar objects.

“The Spitzer picture is composed of four images taken with the telescope’s Infrared Array Camera, IRAC, in different wavelengths of infrared light: 3.6, 4.5, 5.8 and 8.0 micrometres, shown as blue, green, orange and red.

“Organic molecules made of carbon and hydrogen, called polycyclic aromatic hydrocarbons, PAHs, are excited by interstellar radiation and become luminescent at wavelengths near 8.0 microns, giving the nebula its reddish features.” 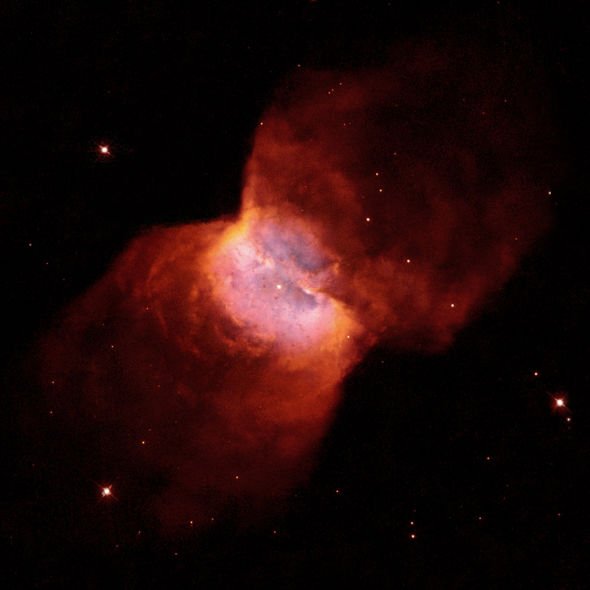 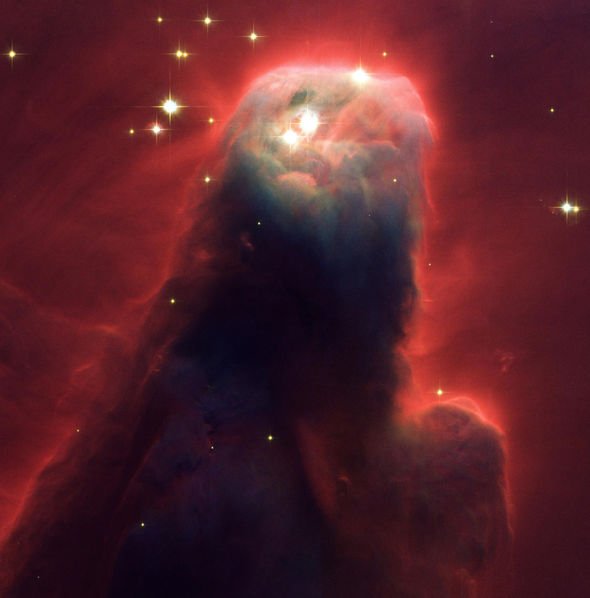 Stars lit up towards the lower end of the wavelength spectrum appear much brighter than others and glow with a blue light.

Some of the youngest stars in the W40 pictures glow yellow red and are seen surrounded by dusty disks of material.

Stars in nebulae typically form when vast amounts of helium and hydrogen begin to pool into a single point.

As more and more gas concentrates in place the increasing gravity becomes stronger and stronger until the whole mass collapses in on itself.

When the gas cloud collapses into its own gravity, the material right in the centre heats up and forms a star’s burning core.