NASA has shared a photo of a mysterious hole on the side of one of Mars’s largest volcanoes, an example of a ‘lava tube’ that could be used as the location of human settlements in the future.

The hole is on the side of Pavonis Mons, a volcano near the Martian equator that has a height of 8.7 miles, even taller than Mt. Everest.

The opening is around 115 feet wide and the cavern below is around 65 feet beneath the surface which NASA’s scientists believe was formed by ancient channels of lava. 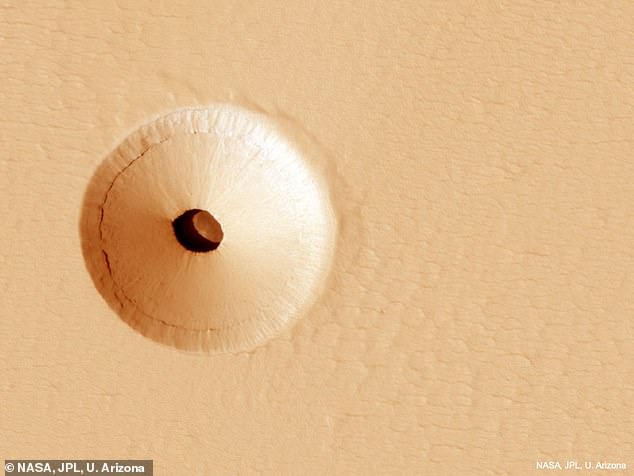 ‘Holes such as this are of particular interest because their interior caves are relatively protected from the harsh surface of Mars, making them relatively good candidates to contain Martian life,’ NASA writes.

‘These pits are therefore prime targets for possible future spacecraft, robots, and even human interplanetary explorers.’

The image was originally captured by the Mars Reconnaissance Orbiter satellite in 2011.

In the subsequent years researchers have seized on the idea of using lava tunnels as locations for settlements when humans eventually reach the red planet.

Similar lava tubes or caverns have been found all across Earth, according to a Newsweek report, including in Hawaii, Spain, Iceland, and the Galapagos Islands, and they’ve even been observed on the moon. 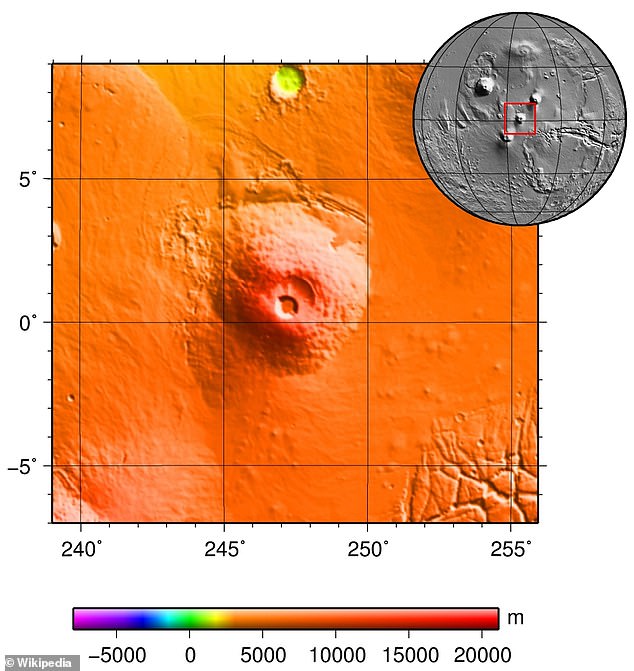 The Pavonis Mons is 8.7 miles high, even taller than Mt. Everest, and sits atop a large network of lava tubes, hollow caverns carved out of rock by ancient lava flows

The tubes are formed as lava flows beneath the planet’s surface around a volcano after an eruption.

The lava creates a hard, burnt crust as it flows, generating structural support for caverns that help to protect them from collapse.

The land around Pavonis Mons is believed to host a large network of such lava tubes.

Pavonis Mons is a shield volcano, which formed as layers of cooling lava piled on top of one another and built up the height of the volcano, creating lots of opportunity for new lava flows to carve out channels in older rock.

Lava tubes are formed below a planet’s surface by flowing lava, which creates a hardened and scorched crust that provides structural reinforcement to keep the tubes from collapsing

Scientists believe such lava tubes are likely to be the largest subterranean spaces on Mars and could protect human settlers on Mars from a variety of environmental dangers, including cosmic radiation and micrometeroites.

On Earth, the only caves larger than lava tubes were formed by giant underground bodies of water which gradually eroded limestone or other rocks.

Because Mars lacks these substances, lava is generally believed to been the main factor in creating many of the planet’s subterranean caves.

On Earth, lava tubes tend to remain fairly narrow because of the effects of gravity, typically around 98 feet across, but in lower gravity environments the tubes can grow much wider.

Martian lava tubes can reach widths of 820 feet, and on the moon they’ve reached widths of more than 1,900 feet without collapsing.

HOW DO LAVA TUBES FORM? 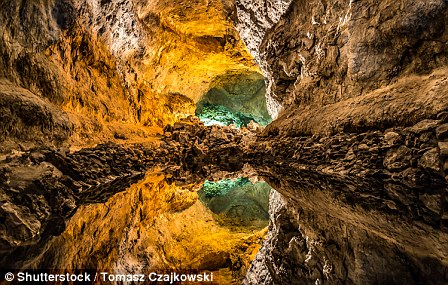 Lava tubes such as those seen at La Cueva de los Verdes can form in two ways.

‘Overcrusted’ tubes form when thinner lava flows fairly close to the surface, developing a hard crust that thickens to create a roof above the moving lava stream.

When the eruptions end, the channel created by the lava is drained leaving a tunnel a few metres beneath the surface.

‘Inflated’ tubes are complex and deep structures that form when lava is injected into existing fissures between layers of rock or cavities from previous flows.

The lava expands and leaves a huge network of connected galleries as it forces its way to the surface.

a, Image, mysterio, Nasa, of, posts
You may also like: