Nato sonar exercise 'may be linked to whale strandings'

Over the past few weeks there have been 29 strandings or sightings of rare beaked whales throughout Europe – and experts think a Nato sonar exercise is to blame.

The Nato sonar anti-submarine exercise off the coast of Iceland happened in July and within two weeks whales began to appear in unusual locations.

Sonar commonly used by America and Nato can cause decompression sickness or a form of narcosis in deep sea whale species and cause them to beach themselves.

It is incredibly rare to see a beaked whale and so to find so many stranded or in shallow water in a short period of time suggests a single cause, experts say.

Two rare deep-sea whales were found beached on British shores within 24 hours of each other zoologists are currently examining the bodies. 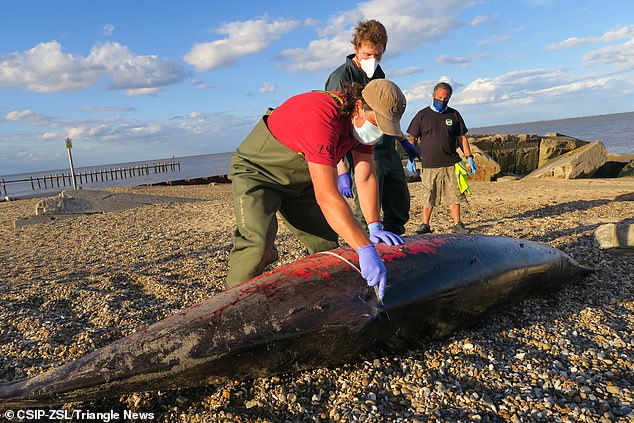 Two rare deep-sea whales have been beached on British shores within 24 hours of each other. A Sowerby’s beaked whale first washed up in Lowestoft, Norfolk, on Saturday, and was swiftly attended by investigators

The aquatic mammals can only feed deep under the ocean and so when they show up in shallower waters it can be fatal as they can’t find sources of food.

Military equipment and animals that use sonar are simply making use of an echo.

Storms and recent bad weather could be behind the strandings, but Dutch whale researcher Jeroen Hoekendijk says the sonar exercise is a likely cause.

The expert, who has been monitoring whale strandings in the Netherlands, wrote on his blog that they are a direct consequence of military sonar.

‘If so, the beaked whales that we are seeing washed up on our shores could be just the tip of the iceberg,’ he said in a blog post.

A number of scientific papers have shown a link between military sonar, seismic surveys for oil and a spate of whale strandings.

One of the most recent, from February 2020, suggested anti-submarine ‘mid-frequency’ active sonar was causing the death of beaked whales.

It’s thought the sonar scares the mammals into surfacing too quickly causing narcosis – a condition also suffered by human divers rising from the deep too fast.

A range of sightings from the North Sea to the Faroe Islands – including some found on beaches dead and others spotted in unusual locations like the Firth of Clyde have led the researchers to believe something unusual is happening.

While narcosis is a likely cause if the Nato sonar exercise is to blame, a team investigating the cause of death for some of the whales found no evidence of it.

Researchers from the Cetacean Strandings Investigation Programme at the Zoological Society of London told the Guardian one of the mammals they studied had no signs of narcosis – but they were still investigating.

This was just one of the 29 marine mammals found stranded or in shallow waters over the past two weeks – so there could be multiple causes.

Among them was a Sowerby’s beaked whale that first washed up in Lowestoft, Norfolk, on Saturday, and was swiftly attended by investigators.

A day later, another of the deep-sea whales was beached in Portsmouth, Hants – expert zoologists rushed to attend as the whales are so far out of their natural habitat.

Sowerby’s beaked whales have teeth, and live on a diet of squid and small fish – the North Sea and many European waters are too shallow for them.

This can lead to confusion and beaching if they become disorientated and find themselves in these shallow waters. 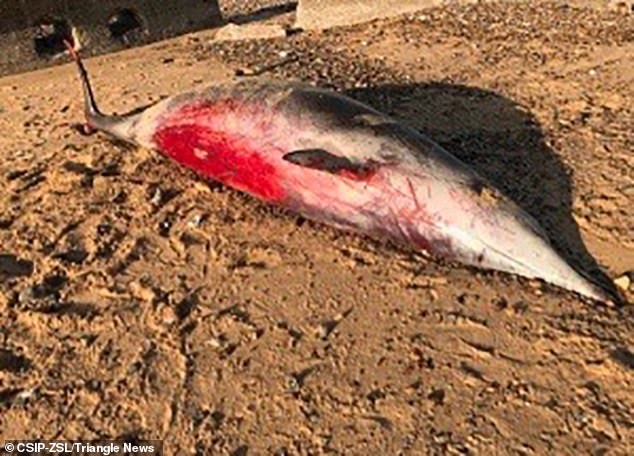 HM Coastguard Lowestoft said: ‘Sowerby’s beaked whales are not native to the North Sea and normally reside north of Scotland and west of Ireland.

“There have been a few whales of this type wash up in recent weeks and, in light of that, zoologists from London made their way to Lowestoft to investigate.’

Rob Deaville, from the Cetacean Strandings Investigation Programme of the Zoological Society of London, examined both of the beached whales.

Speaking about the whale in Norfolk, he said: “It is a juvenile female whale – good muscle and blubber mass but no evidence of recent feeding.

“No ingested marine debris, no trauma or significant evidence of disease from gross examination. Findings so far consistent with an out of habitat individual.’

BEAKED WHALES: AMONG THE LEAST KNOWN MAMMALS IN THE WORLD

Beaked whales are members of the family Ziphiidae, the second largest family of cetaceans – which includes whales, dolphins and porpoises.

Many of the 22 species of beaked whales are among the least known or understood mammals in the world.

So rarely are they seen in the wild that three new species of beaked whales have been discovered in just the last two decades.

Living in deep waters, usually far offshore, these creatures spend 92 per cent of their time underwater. 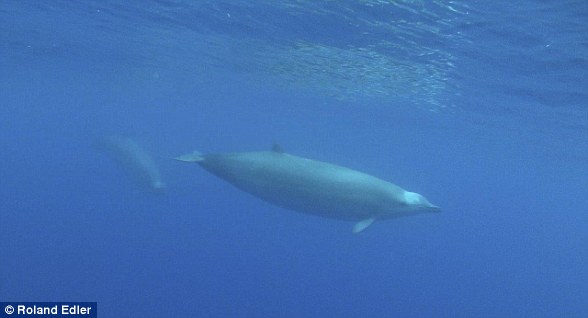 True’s beaked whales are members of the family Ziphiidae, the second largest family of cetaceans – which includes whales, dolphins and porpoises. Many of the 22 species of beaked whales are among the least known or understood mammals in the world (stock)

After these diving feats, they rest, performing shorter and shallower dives with brief surfacing intervals.

These behaviours, combined with the fact that they live in small groups, are not usually attracted to boats, and do not perform aerial acrobatics as much as dolphins, mean that beaked whales are not easy to detect at sea.

Many beaked whales also share colour patterns with other ziphiid species, making identification of the whales difficult during sea encounters when often only a short glimpse of their bodies is available.

They are found in two geographically distinct areas, and these populations may soon be separated into two subspecies or even separate species.

Positive identification at sea is extremely difficult and in the northern reaches of the range it can be virtually impossible without a clear view of the head (of males only), to distinguish between a True’s and a Gervais’ beaked whale.