New device puts music in your head – no headphones required

An Israeli technology firm has debuted a new desktop device that beams sound directly to a listener without the need for headphones, like a personal sound bubble.

The tech will allow office workers to listen to music or conference calls without interrupting colleagues and let anyone play a game, film or music minus headphones without it being heard by anyone else in the vicinity.

The desktop device, which can be paired to a device via Bluetooth, will be ready for consumers to buy in time for Christmas next year. 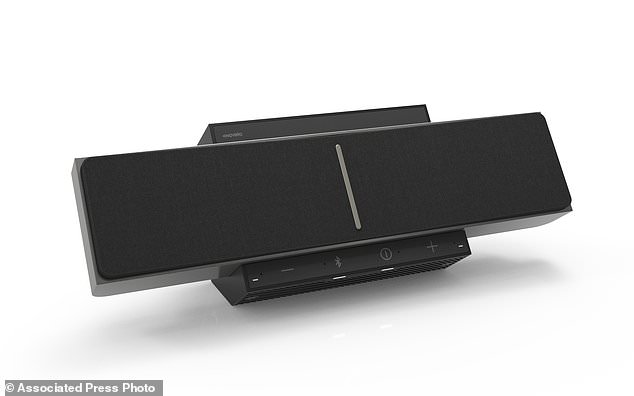 This product image released by Noveto shows the SoundBeamer which beams music and sounds straight into your head, without the need for headphones. The technology uses a 3D sensing module and locates and tracks the ear position sending audio via ultrasonic waves to create sound pockets by the user’s ears

‘Until now, there have been two ways to hear audio – out loud and publicly via speakers, or quietly and privately with headphones,’ the company says on its website.

‘At Noveto, we’re introducing a third and new way to listen using a patented technology we call SoundBeaming.

‘This is an entirely new type of sensory listening that will change the way people experience audio.’

The speaker emits ultrasonic sound waves – those outside the range of human hearing.

To make them audible for the user but not anyone else, a 3D sensing module built into the hardware locates and tracks the position of the user’s ears in real time. 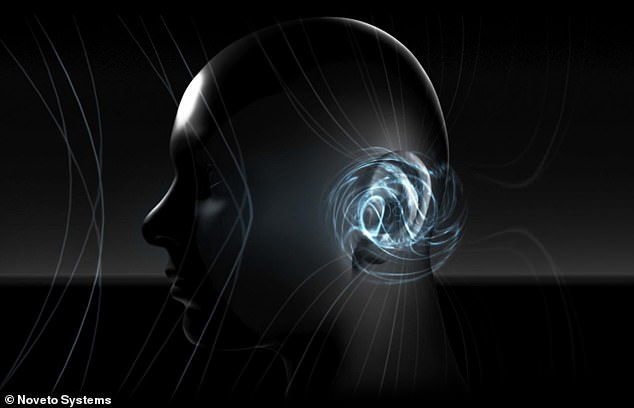 Users can hear audio from a variety of sources privately and without disturbing others. And because the sound is beamed directly outside the ears, listening ‘becomes far more sensory and natural’, Noveto says

At this point, the ultrasonic waves converge into small pockets of sound just outside the ears.

Here, the sound can be heard again as normal acoustic waves without disturbing others in the vicinity and freeing the user of annoying headphones.

‘Move your head in any direction and the two sound pockets will magically follow,’ Noveto says.

The firm has provided Associated Press with a demo of the desktop prototype of its device before its launch.

Associated Press called it ‘a listening sensation straight out of a sci-fi movie’ with 3D sound that feels like ‘it’s inside your ears while also in front, above and behind them’. 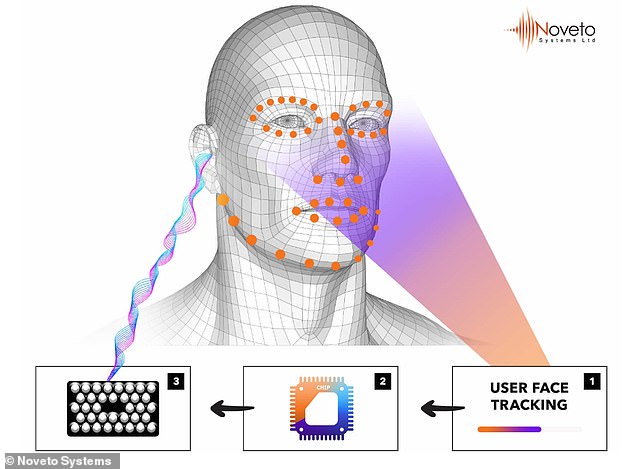 Noveto’s tech enables sound to be ‘dynamically steered and focused’. Each user in a confined space (be it a living room, conference room, vehicle or any public space) can experience audio content without using isolating headphones or sound polluting traditional audio speakers

In a Noveto demonstration conducted via Zoom from Tel Aviv, Noveto product manager Ayana Wallwater was unable to hear the sound of gunshots on a gaming demo while hearing the reactions of people trying the tech for the first time.

‘Most people just say, “wow, I really don´t believe it”,’ she said.

‘You don’t believe it because it sounds like a speaker, but no one else can hear it… it’s supporting you and you’re in the middle of everything. It’s happening around you.’

It’s also possible for users to move out of the beam’s path and hear nothing at all, which creates a ‘surreal experience’, according to Associated Press.

‘You don’t need to tell the device where you are – it’s not streaming to one exact place,’ Wallwater said. 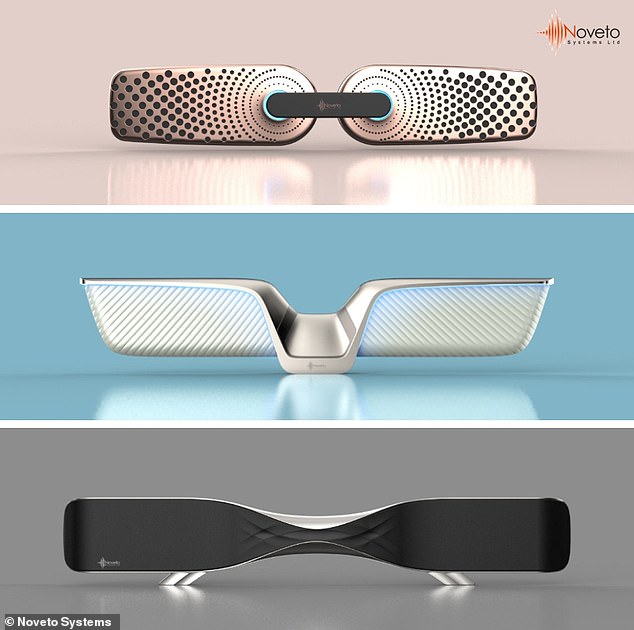 Concepts of different designs for the speaker once it comes to market, which should be in December 2021

‘It follows you wherever you go so it’s personally for you – follows you, plays what you want inside your head.

‘This is what we dream of – a world where we get the sound you want.

‘You don’t need to disturb others and others don’t get disturbed by your sound but you can still interact with them.’

While the concept of sound beaming is not new, Noveto was the first to launch the technology and their SoundBeamer 1.0 desktop device will be the first branded consumer product.

Noveto CEO Christophe Ramstein said a ‘smaller, sexier’ version of the prototype will be ready for consumer release in time for Christmas 2021.

‘You know, I was trying to think how we compare sound beaming with any other inventions in history,’ he said.

‘And I think the only one that came to mind is the first time I tried the iPod I was like, “Oh, my God. What’s that?”,’ said Ramstein.

‘I think sound beaming is something that is as disruptive as that – there´s something to be said about it doesn’t exist before.’

WHAT ARE SOUND WAVES?

Sound waves are longitudinal waves that travel through a medium like air or water.

When we detect sounds, or noise, our body is changing the energy in sound waves into nerve impulses which the brain interprets. Sound waves are produced when the air is mechanically disturbed.

Sound is measured by its:

Frequency – This is the pitch (high or low) of a sound – the number of complete sound wave cycles each second.

Intensity – This is the loudness of a sound. It’s measured in decibels (dB).

When we hear a sound, this is what actually takes place:

1. Sound waves enter the ear canal and cause the eardrum to vibrate.

2. Vibrations pass through three connected bones in the middle ear.

3. This motion sets fluid moving in the inner ear.

5. Nerve impulses are carried to the brain by the auditory nerve.

6. In the brain, these impulses are converted into what we hear as sound

device, in, music, New, puts, Your
You may also like: