See the 1998 disaster film Deep Impact come to life in a new interactive map! Simulation lets you drop asteroids on Time Square, London or any place in the world – and it tells you how many millions of people will be killed

Called Asteroid Launcher, the system lets you choose a location of impact, the diameter of the asteroid, the speed at which it hits the ground and the collision angle – and hit ‘launch’ to see the destructions it causes and the number of people killed.

If an asteroid measuring one mile in diameter smashes into Time Square at 152,000 miles per hour, it would create a 34-mile-wide crater and vaporize 9,486,287 people with the impact equivalent to 6,403 Gigatons of TNT.

Asteroid Launcher is the brainchild of creative coder Neal Agarwal who told DailyMail.com he was inspired by his favorite movie Deep Impact and wanted to create a website that simulated disasters. 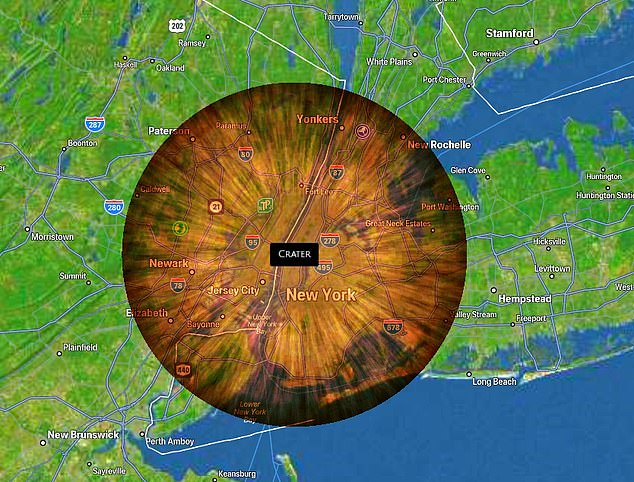 ‘I love disaster movies and playing out different end-of-the-world scenarios in my head,’ Agarwal told DailyMail.com.

‘This project took about two months to complete, one month of research and one month for the coding and animations.’

He explained the equations behind Asteroid Launcher from research papers by Dr. Gareth Collins and Dr. Clemens Rumpf, who study the effects of an asteroid impact.

‘I chose those research papers because they have detailed equations and models of all the various effects of an asteroid impact (thermal radiation, wind, shock waves, earthquakes, ect),’ Agarwal said.

‘They also do a great job of summarizing the current knowledge of the field.’ 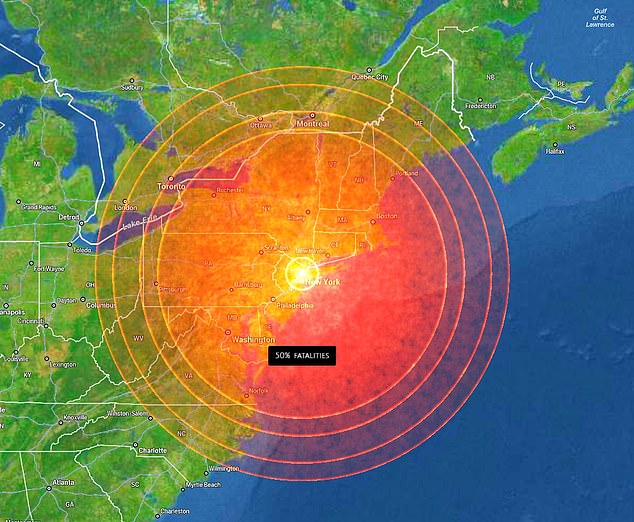 The website also shows destructive events that would follow the initial impact, such as this 74-mile-wide fireball that would give more than four million people third-degree burns and kill over nine million 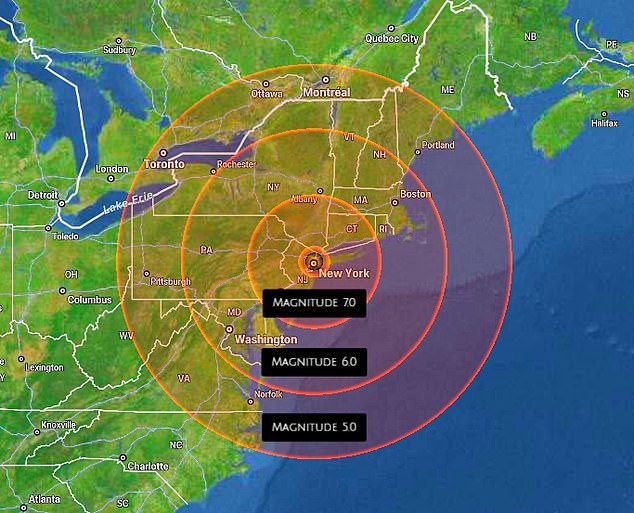 Asteroid Launcher details all the events, destruction and deaths that would potentially occur in the event of an actual asteroid impact.

For example, if the same size asteroid that hit Manhattan hits London while traveling at the same speed of 152,000 miles per hour, it would also create a 34-mile-wide crater that would vaporize more than 7.7 million people in the surrounding area.

And in London, the same fireball would be released during the impact, killing 56,082,822 people.

‘This tool is more for helping the general public learn more about asteroid impacts,’ said Agarwal. 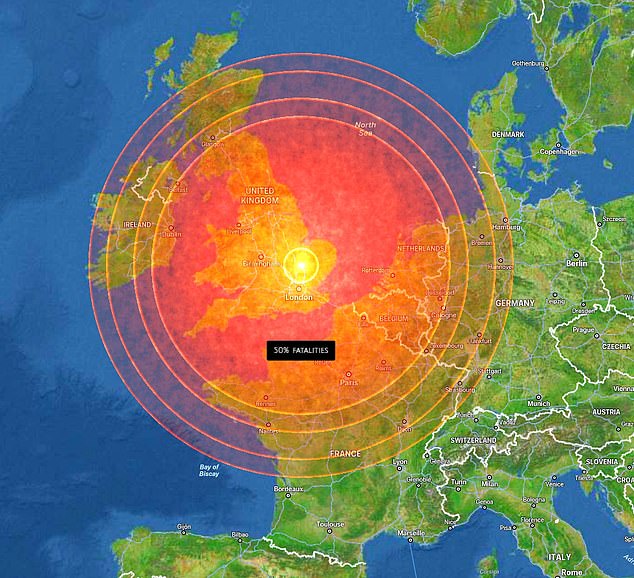 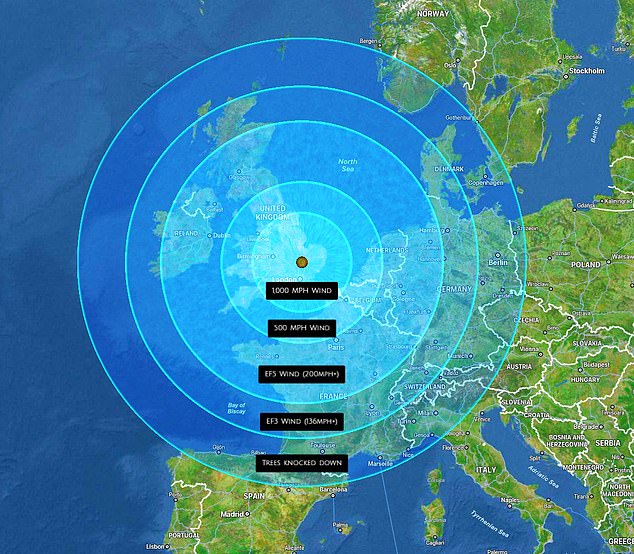 Asteroid Launcher also formulates wind speeds after the asteroid hits. In the case of London, wind within 150 miles of the crater would be faster than storms on Jupiter

Asteroid Launcher is the brainchild of creative coder Neal Agarwal who told DailyMail.com he was inspired by his favorite movie Deep Impact and wanted to create a website that simulated disasters

‘Scientists have even more precise models of asteroid impacts that they run on supercomputers – this simulation is a more simplified version.’

Asteroid Launcher uses Apple Maps to pull satellite footage of the Earth into its simulation and layer visualizations over the selected area to show users how far the destruction travels.

It also provides different options for what the asteroid is made of.

The simulated events in New York and London only happen once every 22 million years, but Earth is predicted to have a close call when one the size of three football fields is expected to come within 19,600 miles from our planet’s surface in 2029.

Asteroid Apophis, named for the serpentine Egyptian god of chaos (also known as Apep), will whizz past Earth on April 13, 2029.

While researchers have ruled out the possibility of the 1,115-foot object slamming into Earth, the close shave will present a unique opportunity to study an asteroid in detail; most others that come this close are much smaller.

‘The Apophis close approach in 2029 will be an incredible opportunity for science,’ said Marina Brozović, a radar scientist at NASA’s Jet Propulsion Laboratory in Pasadena, California, who works on radar observations of near-Earth objects (NEOs).

‘We’ll observe the asteroids with both optical and radar telescopes. With radar observations, we might be able to see surface details that are only a few meters in size.’

The simulated events in New York and London only happen once every 22 million years, but one the size of three football fields is expected to come within 19,600 miles from our planet’s surface in 2029. Pictured is a simulation of how close it will get

It’s expected to make its closest approach before 6 pm ET, when it will be over the Atlantic Ocean.

According to NASA, however, it will be visible in the sky hours before this point.

Apophis will first appear in the night sky over the southern hemisphere, making itself known to viewers on the east coast of Australia.

It will then travel westward to reach the equator by early afternoon before crossing over the United States by around 7 p.m.

The massive space rock will be traveling so fast it will traverse the entire width of the moon in less than a minute, NASA said in a 2019 statement.

While 19,000 miles might sound far away, the space agency says it’s rare for an object of this size to come so close