Nissan unveils revamped self-driving system that uses radar and ‘tri-cam’ setup to see, as it sides with Tesla to shun popular lidar after Elon Musk called the technology ‘a fool’s errand’

Nissan Motor Co Ltd said on Thursday it would, for now, stick to self-driving technology which uses radar sensors and cameras, avoiding lidar or light-based sensors because of their high cost and limited capabilities.

Nissan, which wants to have its self-driving cars on city streets by 2020, has long shunned lidar, a relatively new technology for automobiles which has recently been the subject of an influx in investment by many of its rivals. 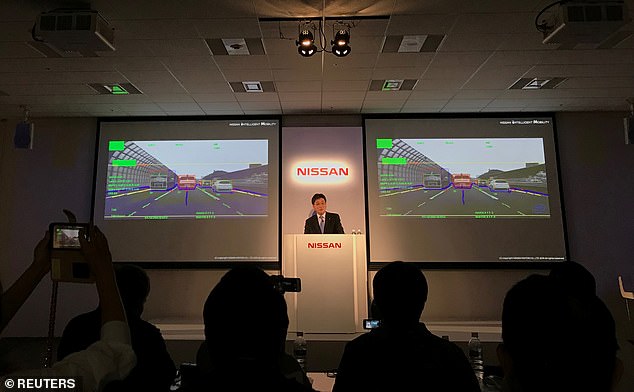 Lidar is a remote sensing technology that measures distance by shooting a laser at a target and analysing the light that is reflected back.

The technology was developed in the early 1960s and uses laser imaging with radar technology that can calculate distances.

It was first used in meteorology to measure clouds by the National Center for Atmospheric Research.

The term lidar is a portmanteau of ‘light and ‘radar.’

Lidar uses ultraviolet, visible, or near infrared light to image objects and can be used with a wide range of targets, including non-metallic objects, rocks, rain, chemical compounds, aerosols, clouds and even single molecules.

A narrow laser beam can be used to map physical features with very high resolution.

‘At the moment, lidar lacks the capabilities to exceed the capabilities of the latest technology in radar and cameras,’ Tetsuya Iijima, general manager of advanced technology development for automated driving, told reporters at Nissan’s headquarters.

‘It would be fantastic if lidar technology was at the level that we could use it in our systems, but it’s not.

‘There’s an imbalance between its cost and its capabilities.’

The technology, to be released in Japan later this year, uses radar and sonar sensors along with cameras to compile the three-dimensional mapping data required for cars to ‘see’ their surroundings.

Apart from sonar, side radar and around-view monitoring cameras, Nissan said it has developed a ‘tri-cam’ that focuses on three points to the front and sides of the vehicle to capture a wide area of view.

Tesla also relies on cameras and radars for its self-driving technology.

Nissan wants to add its self-driving technology to more of its affordable models to boost sales and recover from a profit slump.

When reporting earnings earlier this week, the automaker said it had hit ‘rock bottom’ in the aftermath of a financial scandal involving its ousted Chairman Carlos Ghosn.

Lidar technology uses light-based sensors that fire roughly 1 million laser pulses a second as it collects measurements that are analysed and processed into 3D models and maps.

More than $1 billion in corporate and private investment has been pumped into some 50 lidar startups over the past three years, according to a Reuters analysis in March of publicly available investment data.

Still, it is a technology in flux.

Initially using bulky spinning devices placed on the roof of cars, lidar developers have transitioned to more compact solid-state devices that can be mounted on other parts of a car.

These now sell for less than $10,000 in limited quantities, and are widely expected to eventually sell for as little as $200 in mass production.