Follow
Home » Science » 'No image will surpass this': Hubble telescope astronomers created a stunning picture of the deep universe with 16 years' worth of photos

'No image will surpass this': Hubble telescope astronomers created a stunning picture of the deep universe with 16 years' worth of photos

Astronomers on Thursday published a remarkable new picture of the deep universe. The image, shown in full at the end of this post, contains perhaps 265,000 visiblegalaxies crammed into a region smaller than themoon’s apparent size in the sky.

The picture is actually made of 7,500 photos taken over 16 years by the Hubble Space Telescope, which is operated by NASA and the European Space Agency. If Hubble had taken the images in one back-to-back observation, it would have lasted 250 days.

“No image will surpass this one until future space telescopes like James Webb are launched,” Garth Illingworth, an astronomer at the University of California at Santa Cruz, said in a press release.

The new picture is part of an ongoing project known as the Hubble Legacy Field. The idea is to focus Hubble’s limited time yet incredible resolving power on a small area of the night sky, year after year, and build the deepest and most complete image of space. That small survey will then be applied to the larger universe to improve astronomers’ understanding of it across both space and time.

The project got its start in 1995 when the telescope snapped its first and famous Hubble Deep Field image. For that photo, Hubble targeted one of the darkest patches of the night sky and observed it over 10 days, taking more than 340 photos of the spot. Scientistscombined the images into a picture that revealed the glow of several hundred never-before-seen galaxies, stretching our understanding of the universe’s scale and history. 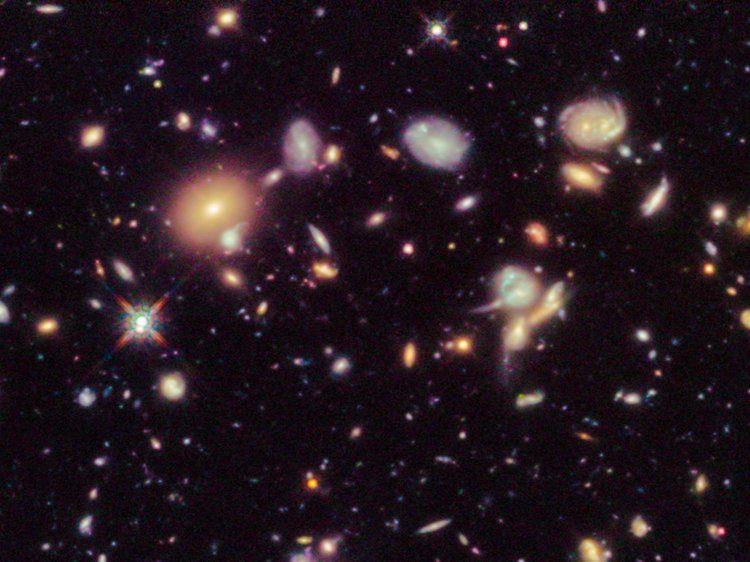 A close-up of the Hubble Ultra Deep Field image.NASA/ESA/STScI

Since then, astronauts have flown out to Hubble several times to make repairs, upgrade cameras, and installnew hardware, improving the observatory’s view of deep space.

Astronomers have exploited those improvements to not only enhance the original Deep Field image but build out the view of space around it. 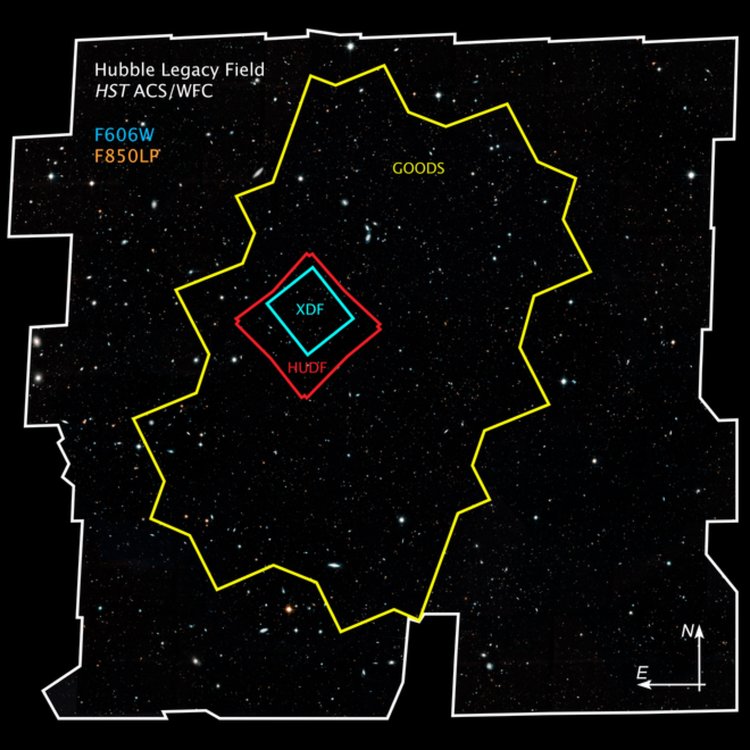 “Now that we have gone wider than in previous surveys, we are harvesting many more distant galaxies in the largest such dataset ever produced,” Illingworth said.

Read more: The Hubble telescope recorded an asteroid ripping itself to pieces

The colors in the photo span from just beyond the edges of human vision — from ultraviolet to near-infrared light — and contain galaxies 10 billion timesfainter than our naked eyes can detect.

This effectively offers a deeper view into the past than ever before: a look at galaxies as they existed 13.3 billion years ago. That’s how long it has taken their light to reach Hubble’s sensors and shows a time about 500 million years after the birth of the universe.

Before Hubble, the best telescopes could see light from objects only about 7 billion light-years away.

Below, you can explore the full-size Hubble image.

Printed at photo-quality resolution, it’d stretch more than seven feet (2.16 meters) per side.

Drag on the picture to pan around, and enlarge any part by using the +/- buttons, pinching on a phone, or using a scroll feature on a computer.

“Hubble has spent more time on this small area than on any other region of the sky,” the press release said.

Researchers will continue adding to and improving the picture with new Hubble observations as long as the telescope is operational. (When Hubble shuts down, NASA may try to plunge it into a “spacecraft graveyard” in the Pacific Ocean.)

But once the superpowerfulJames Webb Space Telescope launches andenormous new ground observatories open, our view of this patch of the night sky — and knowledge about the farthest reaches of space and time — will only improve.