The ability of animals to make vocal noises began 200 million years ago due to nocturnal animals needing to communicate in the dark, scientists say.

The common ancestor of land-based vertebrates, including mammals, birds and frogs, did not have the ability to communicate through vocalisations.

Instead, acoustic communication evolved separately in the last 100 million to 200 million years – depending on the group, the US and Chinese researchers said.

Creatures that since evolved to become diurnal – active during the day – carried with them this new ability to communicate acoustically through growls, chirps and roars. 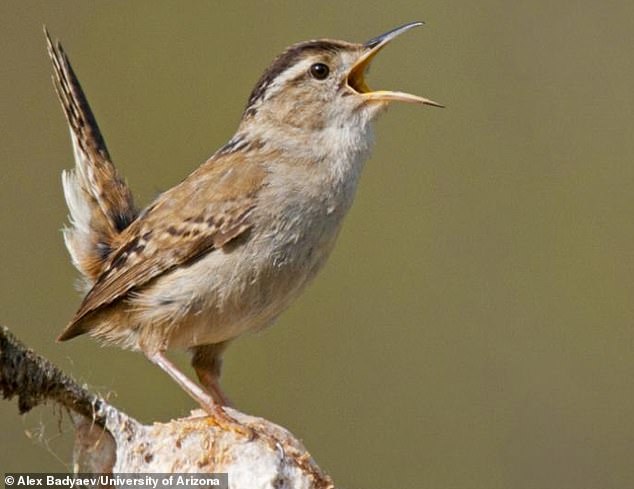 Birds, like this marsh wren, rely heavily on acoustic communication to stake out territories and attract mates

‘Here, we show that this idea of ecology shaping signal evolution applies over hundreds of millions of years and to fundamental types of signals, such as being able to communicate acoustically or not,’ said study author Dr John Wiens from the University of Arizona.

Vertebrates comprise all species of animals with backbones.

They include mammals, reptiles, birds, amphibians and fish.

Animals that lack vertebral columns are known as invertebrates.

Vertebrates originated about 525 million years ago.

The team obtained data from scientific literature on the absence and presence of acoustic communication within each sampled species, mapped it onto the tree and analysed the data.

They found that the common ancestor of land-living vertebrates could not use vocalisations to communicate.

The study, published in Nature Communications, also found that the origins of communications by sound are strongly associated to a nocturnal lifestyle.

This is due to the lack of light, meaning creatures were hampered by the lack of visual signs and had to find other methods to communicate.

When light is no longer available to show visual cues like colour patterns to intimidate a competitor or attract a mate, transmitting signals by sound became the most effective means of communication.

But even creatures in lineages that switched from a nocturnal to a diurnal lifestyle maintained their ability to communicate via sound – in particular birds, which seem to make the most intense noise as day breaks. 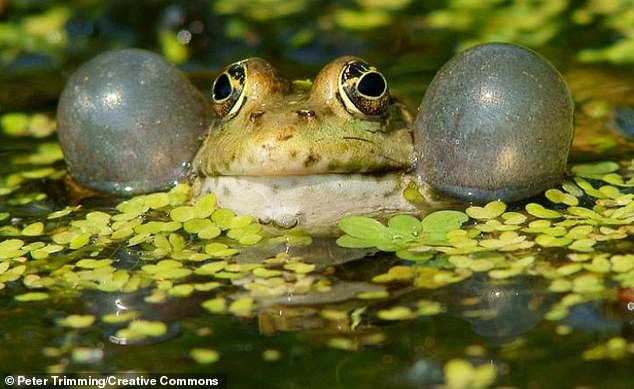 Frogs, like mammals, originated as predominantly nocturnal animals, but maintained the ability to communicate acoustically after switching to being active during the day

It’s possible that this lively ‘dawn chorus’ that we known so well from our Saturday morning lie-ins could be a relic of their nocturnal ancestry.

‘There appears to be an advantage to evolving acoustic communication when you’re active at night, but no disadvantage when you switch to being active during the day,’ said Dr Wiens.

‘We have examples of acoustic communication being retained in groups of frogs and mammals that have become diurnal, even though both frogs and mammals started out being active by night hundreds of millions of years ago.’

The authors estimate that acoustic communication is present in more than two-thirds of terrestrial vertebrates.

The researchers also found that acoustic communication has been a remarkably consistent evolutionary trait.

While some of the animal groups readily come to mind for their vocal talents – like birds, frogs and mammals – crocodilians as well as a few turtles and tortoises can ‘talk’.

Another finding was that the ability to ‘talk’ does not seem to have been the driver of diversification – the rate at which a lineage evolves into a new species – as believed by some scientists.

Dr Wiens illustrated this by pointing to birds and crocodilians.

Both lineages have acoustic communication and date back to around 100 million years ago.

But while there are close to 10,000 bird species, the list of crocodilians doesn’t stretch past 25.

‘If you look at a smaller scale, such as a few million years, and within certain groups like frogs and birds, the idea that acoustic communication drives speciation works out,’ he said.

‘But here we look at 350 million years of evolution, and acoustic communication doesn’t appear to explain the patterns of species diversity that we see.’