Three pairs of North Atlantic right whale mothers and calves have been sighted this month in Massachusetts’ Cape Cod Bay, US researchers report.

US authorities report that the total number of new calves seen so far this year currently sits at seven – a promising sign after none were seen in 2018.

While still an improvement, the number of calves seen so far this year is not high enough to indicate that the endangered whale population is successfully recovering, the researchers say. 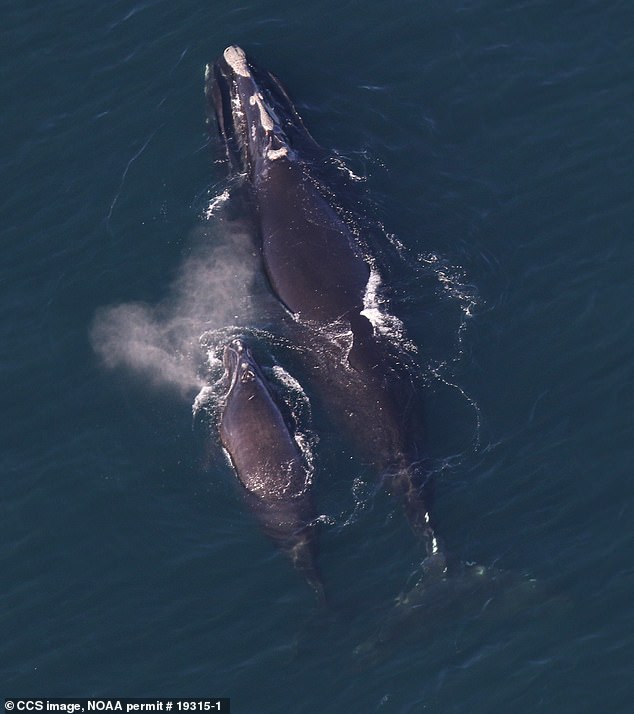 Three pairs of North Atlantic right whale mothers and calves have been sighted this month in Massachusetts’ Cape Cod Bay, US researchers report. Pictured: whale #3317 and her calf

The two most recent North Atlantic right whale calf sightings in Cape Cod Bay were made by an aerial survey team from the Provincetown Centre for Coastal Studies.

The team identified the two mothers from previous sightings – they are known as right whales #3317 and #4180.

No North Atlantic right whale calves were seen at all in 2018 – leading to concerns that the species’ extinction might be looming closer.

These three mother–calf pairs – along with four more – were also spotted earlier this year in the calving ground off of the southeastern US coast, report researchers from the Florida Fish and Wildlife Conservation Commission.

#4810 and her calf were seen in February by a Florida park ranger standing on the nearby shore.

Unfortunately, #4180 appears to have suffered entanglement wounds from fishing gear on her back and peduncle since she was last seen.

The sighting of the pair enabled the researchers to confirm #4180 is female for the first time. 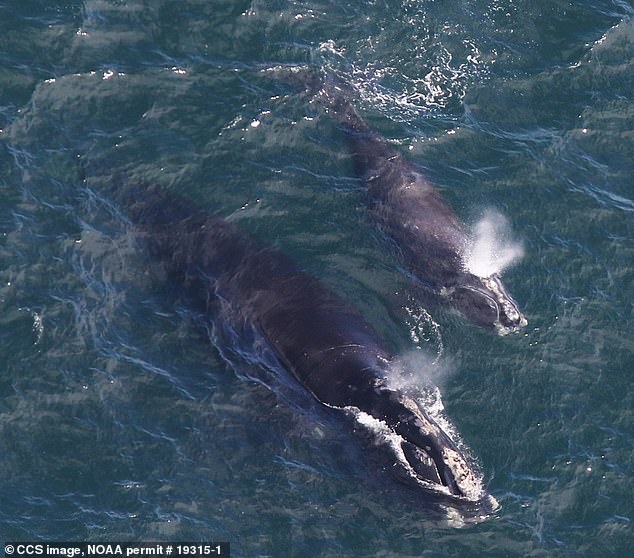 Although researchers are excited by the sightings, the numbers of new young are still painting a worrying picture of the North Atlantic right whale’s future.

North Atlantic right whales are among the world’s most endangered whale species.

Only around 450 are believed to be alive presently.

‘The signs are better than they were last year or the year before, but we’re not out of the woods yet,’ New England Aquarium research scientist Philip Hamilton told The Scientist back in March.

Media coverage of new calf sightings can create the misleading impression that the whale population is successfully recovering, he explained – when this is in fact not the reality.

‘We need an average calf count of 17 each year to build the population,’ he said.

That many calves has not been seen since 2015.

And since 2017, there have been 20 recorded deaths versus 12 known births.

‘We haven’t even broken even on number of dead whales with new births, and that is what the last decade or so has been trending towards,’ said biologist Jen Jakush, from the Florida Fish and Wildlife Conservation Commission.

‘The population is definitely in decline,’ she adds.

It is thought that climate change may be disrupting the whales’ feeding grounds, causing ill health and reducing the number of young born.

Based on present trends, the North American right whale could become extinct in under two decades.

A record of recent sightings of North Atlantic right whales – both calves and adults – are maintained by the National Oceanic and Atmospheric Administration’s Fisheries Service, and can be explored on the interactive map on their website. 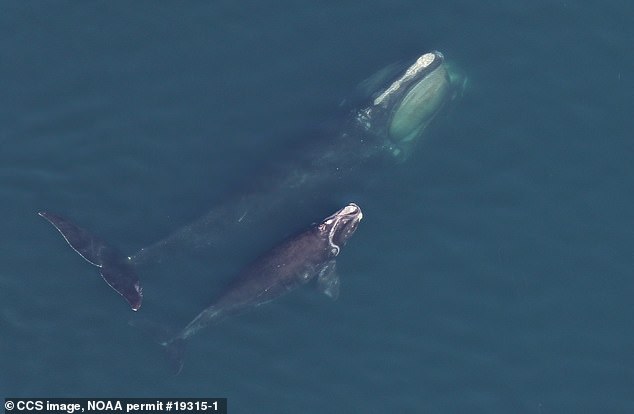 A third new calf had previously been spotted with its mother, right whale #1204, in Cape Cod Bay on April 7. This calf is #1024’s ninth. The mother is at least 38 years old

North Atlantic right whales give birth in winter, off of the coasts of Florida and Georgia, before migrating with their young up to the east cost of the US in the spring.

Their high blubber content, docile nature and tendency to stay both near the sea surface and close to coastlines has traditionally made  North Atlantic rights a prime target for whalers.

The mammals were hunted to the brink of extinction in the early 1890s, and have been on the endangered species list since 1970.

In the eastern side of the Atlantic, North Atlantic right whales are all but extinct, with population numbers thought to be down in the low teens.

The US National Oceanic and Atmospheric Administration has made it illegal for any individual to come within 500 yards (457 metres) of North Atlantic right whale unless they carry a Federal Research Permit.

Right whales are also at particular risk of being accidentally struck by ocean-going vessels – both because of their near-surface feeding habits, but also thanks to the fact that they have no fins on their backs, like killer whales or sharks do.

This makes them more difficult to spot from the sea surface.

For this reason, all boats longer than 65 feet (20 metres) are required to sail at under 10 knots within Cape Cod Bay and off of the coast of the nearby Race Point.

Unfortunately, their calving grounds around Florida and Georgia lie in high-traffic areas of the ocean.

Together, vessel strikes and entanglement within fishing gear are believed to have accounted for around half of the mortalities of North Atlantic right whales since the 1970s.

The Southern right whale, as its name suggests, can be found living across the oceans of the southern hemisphere, with its population thought to number into the thousands.

However, the number of North Pacific right whales is even smaller than their North Atlantic counterpart – with fewer than 200 remaining, report US authorities.

WHAT DO WE KNOW ABOUT NORTH ATLANTIC RIGHT WHALES? 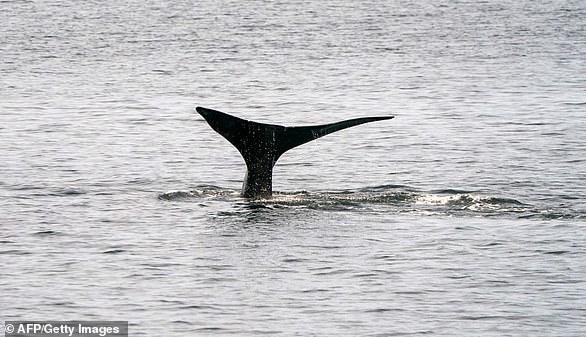 A North Atlantic right whale, seen swimming the waters of Massachusetts’ Cape Cod Bay on April 14, 2019. Only around 450 members of the species are believed to survive

atlantic, North, num, right, whale
You may also like: