‘There are babies everywhere’: Octavius the lone octopus aquarium workers thought was male gives birth to thousands of babies

A curator at the UGA Marine Education Center and Aquarium in Savannah, Georgia, has revealed the shocking moment he realized one of his octopus charges had been given the wrong sex.

Devin Dumont found that the tank holding Octavius, the aquarium’s sole octopus resident, was full of tiny particles that looked like confetti.

But upon closer inspection, he realized that the white specks were something quite different: thousands of baby octopuses. 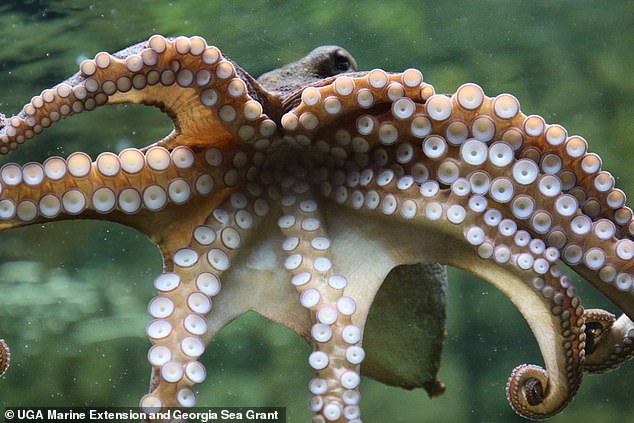 Octavius, an octopus at the UGA Marine Education Center and Aquarium in Savannah, Georgia, just became a mom.

‘I noticed this cloud of moving dots and I realized, ‘Oh my God, she had babies,’ Dumont told Savannah Now.

‘And a sort of panic ensued,’

Aquarium staff did not know that Octavius was female.

Dumont then began to scoop out the tiny hatchlings, placing them in buckets.

Some of the babies are being kept in nursery tanks and in a research lab but they are unlikely to live for long because baby octopuses rarely survive in captivity.

That’s why the aquarium decided to release some of them in a tidal river.

Regardless, for the time being, the aquarium has gone from having just one octopus to having tens of thousands of them.

And more and more are hatching every day.

Unfortunately, the birth of Octavius’ offspring spells the end for the cephalopod because females of her species, Octopus vulgaris, typically die after giving birth.

Octopus moms are genetically wired to use all their energy to protect their babies from predators.

Even though sharks, eels, and dolphins are nowhere to be seen, Octavius will be on guard until the last of her eggs has hatched, and will use whatever strength she has left ‘to waft or aerate or fluff them,’ said Dumont.

‘She gives the last part of her life to her kids to protect them.’

HOW SMART ARE OCTOPUSES?

Octopuses are believed to be highly intelligent, more so than any other kind of invertebrates; but their learning capability is still much debated among biologists.

The creatures have been known to break out of aquariums and into others in search of food, and they have even boarded fishing boats and opened holds to eat crabs stored inside.

They are the only invertebrate which has been shown to use tools, with some species, as pictured above right, retrieving discarded coconut shells and reassembling them to use as shelter.

In laboratory experiments they can be readily trained to distinguish between different shapes and patterns.

In several widely contested studies, they have even been shown to practise observational learning.

In some countries, octopuses are on the list of experimental animals on which surgery may not be performed without anaesthesia.

British animal testing laws regard them as ‘honorary vertebrates’, extending them protections not afforded to other invertebrates.