One in five UK adults unlikely to get coronavirus vaccine, study…

More than a FIFTH of UK adults will refuse to have the coronavirus vaccine when one is made, study reveals

A fifth of people in the UK may refuse to be vaccinated against coronavirus when a jab is available, a major study warned.

Researchers found a ‘concerning level of misinformation around vaccines’ which could significantly affect uptake once a Covid-19 vaccine is approved.

In the largest survey of its kind, 22 per cent of people said they were unlikely to be vaccinated with 10 per cent strongly opposed to it.

Just half (49 per cent) of the 17,500 people asked by University College London researchers said they ‘very likely’ to be immunised, while three-quarters (78 per cent) said they considered it ‘likely’. 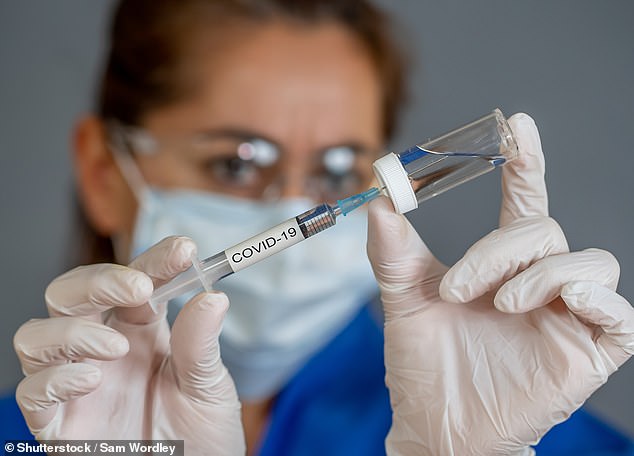 Concerns over vaccine safety, mistrust of pharmaceutical companies and a preference for natural immunity were some of the factors behind the low uptake, which authors stressed ‘lack any basis in fact.’

The findings add to growing concerns over social media being overwhelmed by ‘anti-vaxxer’ myths and scare stories.

Almost one in three (30 per cent) had substantial beliefs that vaccines can cause unknown future problems, while one in seven (15 per cent) said they believed to varying degrees that vaccines do not work.

Dr Daisy Fancourt, from UCL’s Institute of Epidemiology and Health Care, said: ‘Our study highlights a concerning level of misinformation around vaccines, which could significantly affect uptake once a Covid-19 vaccine is approved.

‘Whilst the majority of people have said they are likely to get a Covid-19 vaccine once one is available, a worrying amount of respondents have said that not only will they not get the vaccine, but that they don’t believe vaccines work or worry about potential side-effects, concerns that lack any basis in fact.’

British scientists will be the first in the world to carry out a controversial study where volunteers are deliberately infected with coronavirus in the race against time to find a vaccine, it was revealed today.

The ‘challenge trial’ — which could rapidly accelerate the approval of experimental jabs — is said to be set to begin in January at a clinic in east London.

Participants will be infected with a dose of SARS-CoV-2, the virus that causes Covid-19, a month after being jabbed with a vaccine, according to the Financial Times.

The study, reportedly funded by the government, could help drug-makers test their Covid-19 vaccines without having to wait for volunteers to naturally catch the virus in the community.

Between 100 and 200 participants are expected to be recruited for the trial, which is being run by a US advocacy group that has campaigned for human challenge trials throughout the pandemic.

It’s unclear which vaccine candidate will be tested, but drug giants AstraZeneca and Sanofi have both insisted they aren’t taking part. MailOnline has approached Imperial College London — Britain’s other jab front-runner — for comment about its involvement.

Challenge trials are commonly deployed by scientists trying to develop a vaccine and have been used in malaria, typhoid and flu. But, unlike those illnesses, there is no proven treatment for people with mild coronavirus, so there is nothing to stop the participants falling seriously ill.

A public health campaign that promotes the importance of getting vaccinated will be critical to protect society, she added.

In the same week the record flu programme got underway, the same survey revealed 64 per cent reported that they would be likely to get a flu jab this winter, while 21 per cent said it was unlikely.

Older adults were nearly three times as likely to report strong intentions to get a flu vaccine with 73 per cent of over-60s very likely compared to 25 per cent of 18-29 year olds.

Experts said this was in line with usual patterns for flu, with this year’s programme expanded to include 30 million people in a bid to stop the NHS from becoming overwhelmed this winter.

Notably, older adults felt they were more likely to get the flu vaccine (73 per cent) than a Covid-19 vaccine (58 per cent).

More than a third (38 per cent) of respondents reported believing to varying degrees that natural immunity is better than immunity from vaccines.

Over half – 53 per cent -said they believe vaccines can cause unforeseen effects, while a quarter reported believing that vaccines are used for commercial profiteering.

A further 4 per cent said they strongly believe that vaccine programmes are a con from pharmaceutical companies, and public authorities promote vaccination for financial gain.

The Covid-19 Social Study is the UK’s largest study into how adults are feeling during lockdown, with over 70,000 people questioned each week.

Cheryl Lloyd, of the Nuffield Foundation which funds the study, said it was vital leaders had the confidence of the public.

She said: ‘These findings reveal valuable insights into public concerns about vaccinations and highlight the importance of building public trust in the safety and efficacy of a Covid-19 vaccine, particularly at a time when there is a significant lack of confidence in the Government response to the pandemic.

‘Given people’s reasons for distrust of vaccines, transparency about the scientific evidence and the role of commercial providers is likely to be a key factor in gaining public trust, as is involving the public in the decision-making process.’

adults, five, in, one, UK, unlikely
You may also like: