How your field of view affects speed perception: Incredible optical illusion reveals removing objects from your peripheral vision tricks the brain into thinking it is moving slower than it is

A known master of optical illusions has revealed how important a person’s field of view is in speed perception.

Professor of psychology at Japan’s Ritsumeikan University Akiyoshi Kitaoka filmed from the front of a train and zoomed in on the tracks ahead.

The bizarre phenomenon tricks the brain into thinking the train is travelling slower when the footage is zoomed in.

It is due in-part to the fact fewer objects can be seen in the periphery which gives less reference for how fast things are passing by. 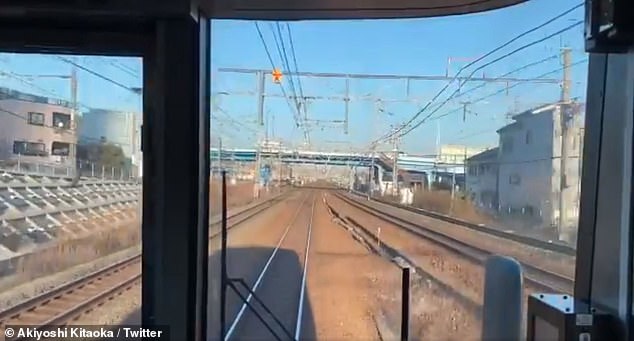 Professor of psychology at Japan’s Ritsumeikan University Akiyoshi Kitaoka filmed from the front of a train and zoomed in on the tracks ahead. The bizarre phenomenon tricks the brain into thinking the train is travelling slower when the footage is zoomed in

HOW DOES FIELD OF VISION ALTER SPEED PERCEPTION?

Scientist shave long known that things appear faster when a person has an expanded field of vision.

This allows more things to be seen in the periphery which makes things seem to zoom past quicker.

However the reverse is also true, if a person has a restricted field of vision, they see things as being slower than they actually are.

This phenomenon changes how video is viewed in the brain and the optical illusion has been exploited by cinema.

For example, in action films, they remove all frame of reference and restrict the field of vision to make things seem more dramatic, such as car chases or flyovers of planes.

The video was shared on Twitter by the professor titled as ‘Differences in perceived speed’.

On a formal page for the university he works for, it says: ‘When observers take a train and see the front scene with a video camera, the speed of the train appears to be slower when the camera zoomed in.

‘In contrast, the speed appears to be faster when the camera zoomed out.’

As Dr Kitaoka zooms in through the front window of a train, the video appears to go into slow-motion.

However, as other videos posted on his feed attest, the train is travelling at a consistent speed.

The first level of zoom shows the inside of the cab as well as buildings and overpasses flying by in the foreground.

One incremental increase in zoom narrows the scope of the footage and things seems to slow down immediately.

Although the edge of the tracks and structures are still inside the field of vision, a lot of the wider distractions have been removed,

The next time the professor zooms in the effect is more dramatic, with all signs of the driver’s cab removed from sight and only the gantries and tracks visible.

Removal of the vertical pane of the driver’s door is a crucial step as it gets rid of the one main point of reference.

As things fly past this fixed point the speed can be inferred by the brain, and without it it almost seems as though things are barely moving.

F---, How, illusion, optical, reveals
You may also like: