Follow
Home » Science » Our ancestors were using fire to make tools 300,000 years ago

Our ancestors were using fire to make tools 300,000 years ago

Fire was used to make tools by our early human ancestors some 300,000 years ago, an analysis of flint blades unearthed in a cave east of Tel Aviv has revealed.

Researchers from Israel studied stone blades, flakes and pot-lids from the Qesem cave — and discovered evidence that they had been exposed to controlled fires.

Exposing the flints to specific intensities of fire would have improved blade production, the team explained.

Previous studies identified fire-altered tools from the Late Lower Palaeolithic — 420–200,000 years ago — but it had been unclear if they had been heated intentionally. 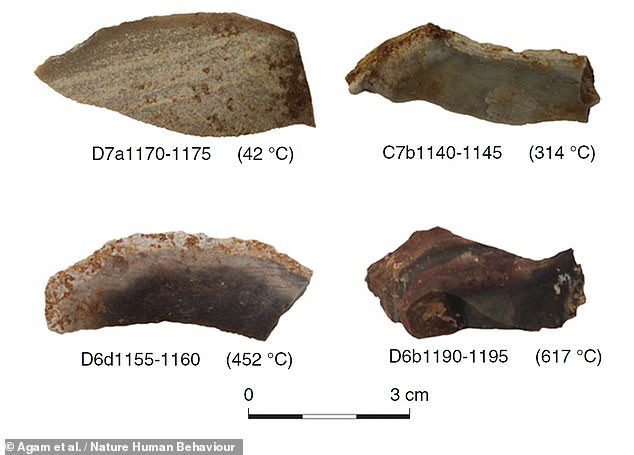 Fire was used to make tools by our early human ancestors some 300,000 years ago, an analysis of flint blades (pictured) unearthed in a cave east of Tel Aviv has revealed

‘The use of fire to treat raw materials was an important discovery made by early hominins,’ said paper author and archaeologist Filipe Natalio of the Weizmann Institute of Science in Rehovot, Israel.

In their study, Dr Natalio and colleagues analysed the burned artefacts from the Qesem cave using a scanning technique called spectroscopy which uses beams of light to assess the temperatures to which the flints were heated.

By replicating these conditions in a lab. experiment, the team were able to show that controlling the fire intensity in such a way improved the quality of the flint blades.

‘Levantine hominins may have purposefully heated materials to different temperatures in order to enhance the production of tools,’ said Dr Natalio.

The findings indicate that our ancestors in the Levant — what is today known as Israel, Lebanon, Egypt, Syria and Palestine — had control over fire hundreds of thousands of years ago.

Previously, it had been thought that the flint was exposed to different intensities of fire largely at random. Heat treatment is known to make flint shaping easier.

‘These results are consistent with a differential behaviour for selective tool production that can be viewed as part of a plethora of innovative and adaptive behaviours of Levantine hominins around 300,000 years ago,’ Dr Natalio said:

The Qesem cave — which lies in the rolling countryside east of Tel Aviv — was first discovered 20 years ago by road builders.

The site has provided a captivating glimpse into humanity’s remote past — and is home to the world’s first known fireplace.

The discovery of charred remnants of animal bones and flint tools once used for butchering meat paint a picture of families cooking and eating around the fire. 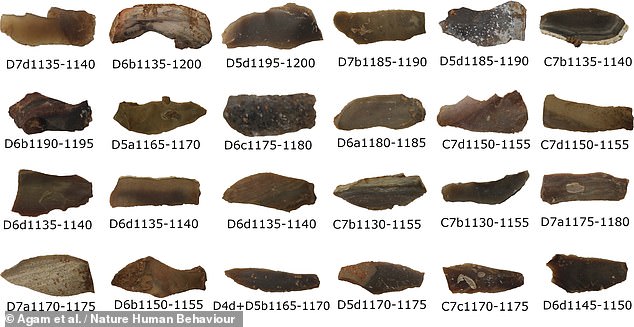 Researchers from Israel studied stone blades (pictured), flakes and pot-lids from the Qesem cave — and discovered evidence that they had been exposed to controlled fires

The findings add to evidence that the Levantine hominins of this time were a very sophisticated, clever people — whose toolmaking was advanced.

They were at the start of a new stage of human existence when people hunted deer skilfully, gathered firewood, made barbecues and ate well.

‘Pyro-technology for the heat treatment of raw material’ was one ancestors’ many uses for fire, Dr Natalio explained.

‘It permitted greater control over the knapping process, providing hominins with sets of tools with unique properties for improved adaptation and survival.’

‘Our study of flint tools provides evidence consistent with hominins at the site heating flint to low temperatures specifically for improving blade production.’ 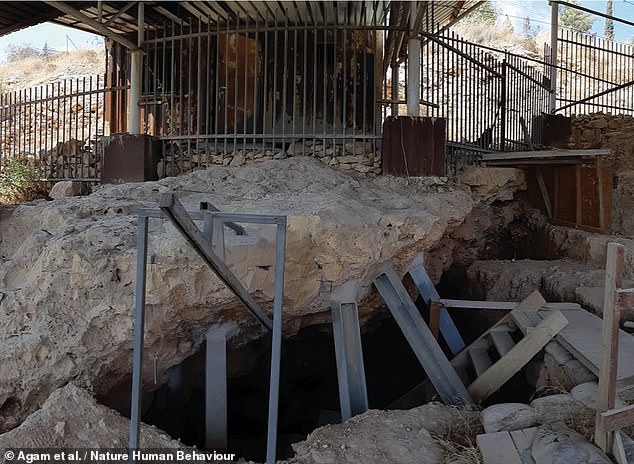 Exposing the flints to specific intensities of fire would have improved blade production, the team explained. Pictured, the Qesem cave which lies to the east of Tel Aviv

Last year, a study found that the occupants of the Qesem cave stored bone marrow ‘like tinned soup’. Deer bones kept at the cave were covered in skin for preservation for when food ran short.

The world’s first fire-made tools would have been used to butcher deer, pigs, goats — and even tortoises, said a scientist.

‘It led to the emergence of sharper and longer blades that were more efficient for butchering small game,’ said Dr Natalio.

‘In short, these are unique and advanced behaviours. Our ancestors not only knew how to use fire — they also developed sophisticated technologies for making tools.’

Previous studies identified fire-altered tools from the Late Lower Palaeolithic — 420–200,000 years ago — but it had been unclear if such had been heated intentionally. Pictured, a selection of the flint blades found in the Qesem cave

Of his analysis, Dr Natalio said: ‘Our approach goes beyond a visual and subjective analysis. It relies on chemical modification in the rock structure that remain for a long period of time.’

‘So the rocks act as thermometer. Using artificial intelligence we can estimate the temperatures — be it higher or lower.’

The study adds to evidence the inhabitants of Qesem were a very sophisticated, clever people whose tool-making skills were years ahead of their time.

The ancient hominins — a group including us and extinct members of our family tree — left behind tens of thousands of stone tools.

‘These tools are mainly made of flint — a material which is readily available all over the country — and they were produced in a process called knapping,’ said Dr Natalio.

‘That’s using another rock or tool to chip off pieces — honing a sharp edge.’

‘Somewhere between 300,000 to 400,000 years ago the main prey these hominins hunted had changed — from elephants to fallow deer.’

This meant a switch in the tools used towards finer artefacts.

‘We can’t know how they taught others the skill of toolmaking, what experience led them to heat the raw flint to different temperatures or how they managed to control the process,’ Dr Natalio said.

‘But the fact the longer blades are consistently heated in a different way than the other pieces does point to an intent.’

The full findings of the study were published in the journal Nature Human Behaviour. 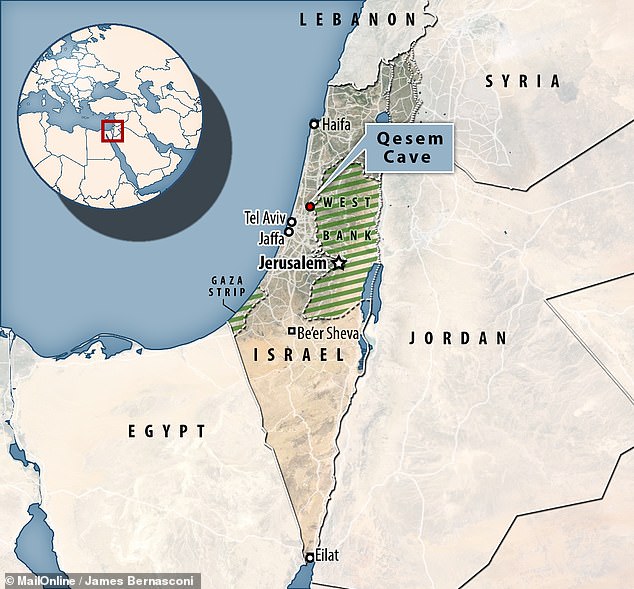 Researchers from Israel studied stone blades, flakes and pot-lids from the Qesem cave, east of Tel Aviv — and discovered evidence that they had been exposed to controlled fires

WHEN DID HUMANS START USING TOOLS?

It is hard for scientists to say precisely when humans started making tools because the more primitive remains look like a natural object rather than a human artefact.

The oldest-known instruments are the Oldowan stone tools from Ethiopia, which date back about 2.6 million years.

The Acheulean tool technology period – up to 1.76 million years ago – featured large stone hand axes made from flint and quartzite.

Towards the end of this period, the tools became more refined and then followed the so-called Levallois technique, which saw the creation of scrapers, slicers, needled and flattened needles.

About 50,000 years ago more refined and specialised flint tools were made and used by Neanderthals and it is believed it was at this stage tools were constructed out of bone.

As human culture advanced, artefacts such as fish hooks, buttons and bone needles were used.

Cut marks have found on animal bones that have been dated to be 3.4 million years old – around the time that a squat ape-like ancestor called Australopithecus afarensis – known as Lucy – roamed Africa.

ancestors, fire, Our, using, Were
You may also like: