Your dog DOES want to save you! Pet pooches will try to rescue their distressed owners even if there’s nothing in it for them, study shows

Dogs are often depicted on TV and film as wanting to rescue their owners – and now a new study shows it’s true.

Pet dogs will save their distressed owner even if there’s nothing in it for them, US researchers have found – but as long as they know how.

Experiments in Arizona found one third of dogs rescued their distressed owners from a metal box when they were desperately calling out for help.

But those dogs that didn’t save their owner were hampered by a lack of knowledge of how to do so.

Dogs suffer from an ‘emotional contagion’ – the transmission of stress from the owner to the dog, similar to the human version of empathy, scientists say.

Our pets show signs of stress and anxiety when they hear their owner is in distress – including whining and running – which can swiftly turn to happiness when we’re safe again.

In the tests, each owner was confined to a large box equipped with a light-weight door, which the dog could move aside. The owners feigned distress by calling out ‘help’ or ‘help me’

‘Most dogs would run into a burning building just because they can’t stand to be apart from their owners. How sweet is that?’ said Joshua Van Bourg at Arizona State University’s Department of Psychology.

‘And if they know you’re in distress, well, that just ups the ante.

‘A lot of the time it isn’t necessarily about rescuing, but that doesn’t take anything away from how special dogs really are.’ 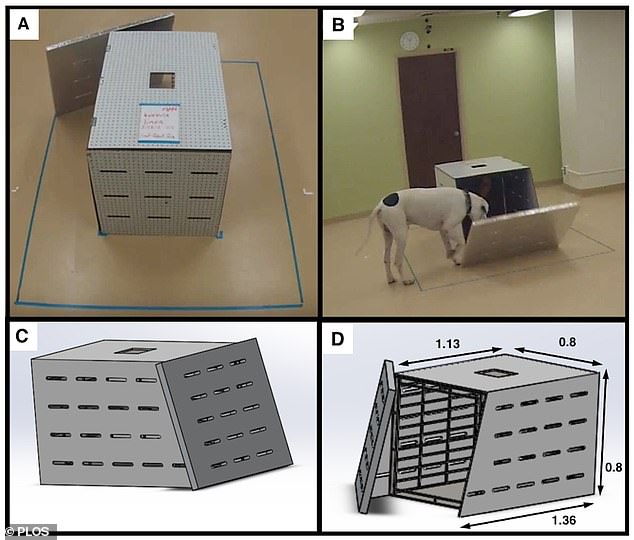 The experiments centred on the use of a metal box (A) large enough for a human. The box included a lid that could be removed by a dog (B). Drawings of the apparatus (C and D) complete with measurements in metres (3.7 by 2.6 by 2.6 feet)

Until recently, little research has been done on dogs’ interest in rescuing humans, which is what we have come to expect thanks to TV shows like Lassie from the 1950s.

‘The difficult challenge is figuring out why they do it.’

At the university’s Canine Science Collaboratory, a research centre dedicated to dog behaviour, Van Bourg and a colleague set up an experiment to asses 60 pet dogs’ and their propensity to ‘rescue’ their owners from a metal box.

None of the dogs had previously been trained to perform such an endeavour.

In the main test, each owner was confined to a large box equipped with a ‘door’ that the dog could move aside. 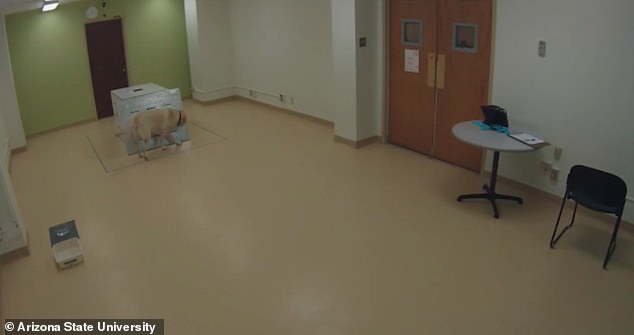 Owners weren’t allowed to call their dog’s name, which would encourage the dog to act out of obedience, and not out of concern for her owner’s welfare

The owners inside the box then feigned distress by calling out ‘help’ or ‘help me’ as the dogs entered the room.

The researchers had ‘coached’ the owners so their cries for help sounded authentic, according to the university.

Owners also weren’t allowed to call their dog’s name, which would have encouraged the dog to act ‘out of obedience’ and not out of a concern for their welfare.

In all, 20 out of the 60 dogs recused their trapped owner by moving the entrance to the box.

‘About one third of the dogs rescued their distressed owner, which doesn’t sound too impressive on its own, but really is impressive when you take a closer look,’ said Van Bourg.

Crucially, dogs need to know how to rescue their owners, which may account for the two thirds that didn’t do so in the trials. 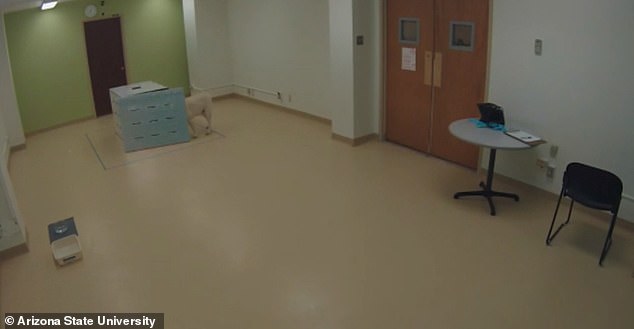 To learn more, the team conducted control tests that didn’t involved the dogs rescuing their owners.

Of the 60 dogs tested in the experiments at Arizona State University:

– 20 rescued the owner in the primary distress test

– 16 released the owner from the apparatus in the reading test

In one control test, the dog watched the researcher drop food into the same metal box that had held their owner.

Out of 60 dogs, only 19 – less than a third – were able to open the door to get the food, but within this third, 84 per cent rescued their owners.

Dogs who fail to rescue their trapped owners are unable to understand what to do, rather than not caring about their welfare, the team report.

‘The fact that two-thirds of the dogs didn’t even open the box for food is a pretty strong indication that rescuing requires more than just motivation, there’s something else involved, and that’s the ability component.’

Van Bourg said that most dogs want to rescue their owners in times of distress, but ‘they need to know how’.

In another control test, the researchers looked at what happened when the owner sat inside the box and calmly read aloud from a magazine.

Only 16 dogs out of 60 opened the box in this case – four fewer than during the distress test. 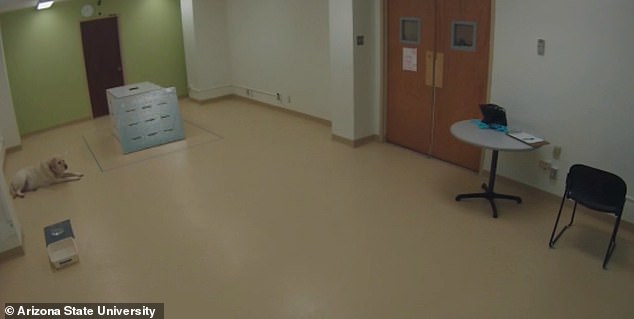 When the owner was simply sat in the box calmly reading a magazine, signs of stress in the dog, or the urgency to ‘rescue’ their owner, was lower overall

In the researchers’ video of one particular trial, a labrador retriever calmly sat down a few feet away from the box, fairly indifferent to the fact that their owner was sat in a box reading.

This shows that the act of ‘rescuing’ cannot be solely explained by the dogs wanting to be near their owners.

They noted doggy behaviours that can indicate stress, such as whining, walking, barking and even yawning, which is often an indicator of anxiety. 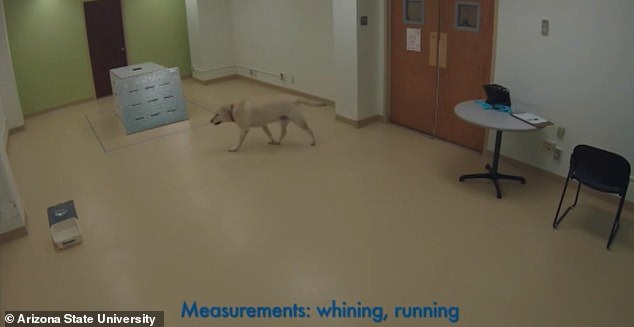 Symptoms of stress included running, whining and yawning – which has previously been identified as a sign of anxiety in dogs, such as when they’re expecting punishment

‘During the distress test, the dogs were much more stressed – when their owner was distressed, they barked more, and they whined more,’ Van Bourg said.

In total, eight dogs whined during the distress test, while one other dog whined for food.

The researchers also repeated the distress and reading tests with the same dogs.

The second and third attempts to open the box during the distress test didn’t make the dogs less stressed than the first attempt, they found, suggesting repeated exposure to a stressful situation doesn’t get any easier for our pets. 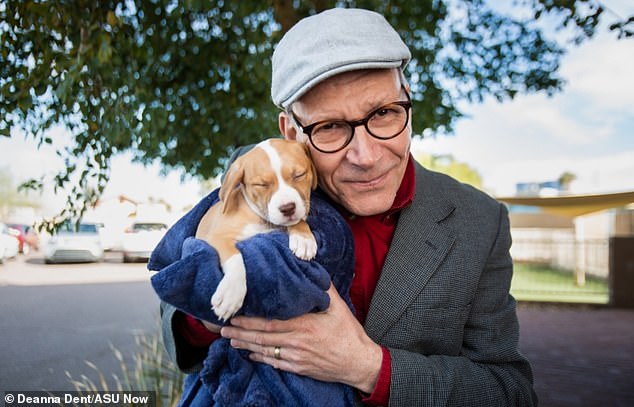 Co-author of the study Professor Clive Wynne, who studies studies the evolution, development and dynamics of the bond between humans and dogs

‘What’s fascinating about this study is that it shows that dogs really care about their people,’ said co-author Clive Wynne, a professor of psychology and director of the Canine Science Collaboratory.

‘Even without training, many dogs will try and rescue people who appear to be in distress – and when they fail, we can still see how upset they are.’

Future research at the Canine Science Collaboratory will investigate whether dogs would still open the box even if that did not give them the opportunity to reunite with their owners.

The study has been published in PLOS.

Dogs yawn when they are feeling anxious, according to the American kennel Club.

During an obedience class, dogs feeling stress and displeasure from their owners will often yawn as if to display their understanding that punishment may be coming.

When on a walk, if you stop to talk to a neighbour, you might notice your dog yawn a few times.

This is because your dog is either uncomfortable with the person, or perhaps he or she is anxious to get moving again.

Many times, when a dog is faced with an aggressive dog, he will offer a yawn in response to the aggressor as a sign he or she is not interested in any sort of conflict.

Yawning can also be seen in dominant dogs and wolves – when they are confronted with submissive or fearful pack members or strangers, they will often yawn to show their lack of concern with the submissive one.

This often seems to have a calming effect on the anxious dog or wolf.