Phosphorus arrived on comets more than four billion years ago

The origin of life on Earth: Phosphorus – which is a fundamental building block of all living things – arrived on comets more than four billion years ago

Phosphorus, a chemical needed by all living things on Earth, came to the planet on the back of a comet four billion years ago, astronomers discover.

They have tracked the chemicals journey from its creation in star forming regions of space to its eventual arrival on Earth where it helped kick start life.

An international team of astronomers studied the star forming regions and comets around Jupiter to make their discovery.

They found phosphorus gets ‘locked’ inside dust that eventually turns into comets, one of which struck Earth billions of years ago, bringing the chemical to the planet. 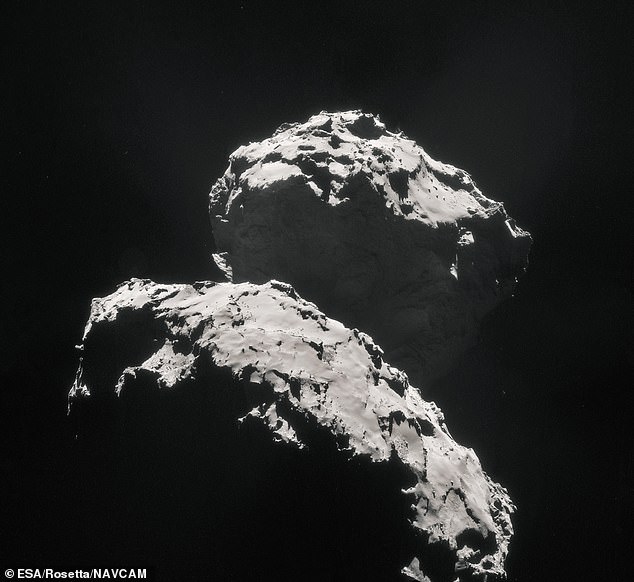 Mosaic of comet 67P/Churyumov–Gerasimenko, created using images taken on 10 September 2014 when ESA’s Rosetta spacecraft was 27.8 km from the comet. The team discovered evidence of phosphorus within the comet

Phosphorus is used in the body to make the chemical phosphate – vital to cell membranes, muscles, nerves and bones. It also forms the backbone of DNA.

‘Life appeared on Earth about four billion years ago but we still do not know the processes that made it possible’, said Victor Rivilla, lead author on the study.

To find out, an international team of astronomers used a group of telescopes in Chile called the Atacama Large Millimeter Submillimeter Array (Alma).

They studied a region in the constellation of Auriga known as AFGL 5142, where stars are being formed to see if they could find the origins of the chemical.

The team discovered that when massive stars are formed they open up cavities in the surrounding interstellar clouds of gas and dust where phosphorus-based compounds are created. 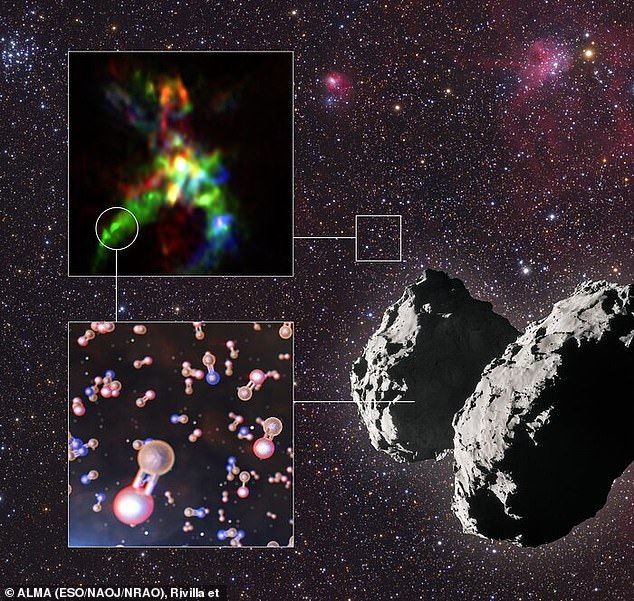 This infographic by the European Southern Observatory shows the key results from a study that has revealed the interstellar thread of phosphorus, one of life’s building blocks

The astronomers then looked at data from the European Space Agency’s probe Rosetta, which was launched in 2004 to study the comet 67P, and found evidence of phosphorus monoxide.

Dr Rivilla said: ‘The combination of the ALMA and ROSINA data has revealed a sort of chemical thread during the whole process of star formation, in which phosphorus monoxide plays the dominant role.’

They say the findings allowed them to trace the journey of phosphorus from star-forming regions to comets and then on to planets through comet strikes.

The astronomers believe that when cavity walls in the interstellar clouds collapse to form a star, phosphorus monoxide can get trapped in the icy dust grains that remain around the new star.

Those dust grains gradually come together to form pebbles, rocks and ultimately comets, which then become transporters of phosphorus monoxide. This ALMA image shows a detailed view of the star-forming region AFGL 5142. The flows of gas from this star have opened up a cavity in the region, and it is in the walls of this cavity (shown in colour), that phosphorus-bearing molecules like phosphorus monoxide are formed

‘Phosphorus is essential for life as we know it’, said Kathrin Altwegg, of the University of Bern in Switzerland and an author on the study.

‘As comets most probably delivered large amounts of organic compounds to the Earth, the phosphorus monoxide found in comet 67P may strengthen the link between comets and life on Earth.’

He said this includes finding out how common the chemical conditions favourable for the emergence of life are.

‘The synergy between world leading ground-based and space facilities, through the collaboration between ESO and ESA, is a powerful asset for European researchers and enables transformational discoveries like the one reported in this paper.’

The study is published in the journal Monthly Notices of the Royal Astronomical Society. 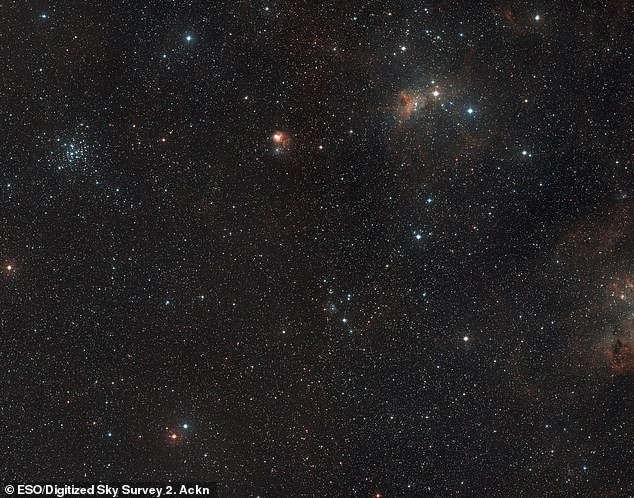 This wide-field view shows the region of the sky, in the constellation of Auriga, where the star-forming region AFGL 5142 is located

HOW IMPORTANT IS PHOSPHOROUS TO LIFE ON EARTH AND HOW DID IT GET HERE?

Though nowhere near as abundant on Earth as carbon, Hydrogen or Oxygen, phosphorous is one of the key elements to life on our planet.

It helps form the backbone of the long chains of nucleotides that make up DNA – the building blocks of biological life as we know it.

Phosphorous is also vital to cell membranes and the cell energy-carrying molecule ATP.

Phosphorous likely came to Earth aboard meteorites billions of years ago.

The meteorites are believed to have contained a phosphorus-bearing mineral called schreibersite.

Scientists recently developed a synthetic version of schreibersite that reacts chemically with organic molecules, showing its potential as a nutrient for life.

arrived, comets, M, on, Phosphorus
You may also like: