Pig brains have been kept alive outside their bodies for the first time as part of a controversial new experiment.

The brains of hundreds of pigs survived for up to 36 hours after the animals had been decapitated, researchers revealed.

The radical experiments could pave the way for brain transplants and may one day allow humans to become immortal by hooking up our minds to artificial systems after our natural bodies have perished. 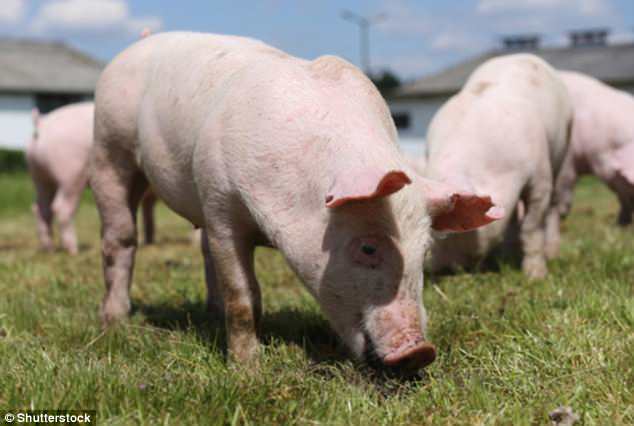 Pig brains have been kept alive outside of the body for the first time as part of a controversial new experiment. The radical experiments could pave the way for human brain transplants and may one day allow humans to become immortal (stock image)

Scientist Dr Nenad Sestan, who led the Yale University team, disclosed his methods in a meeting at the National Institutes of Health in Bethesda, Maryland.

Researchers were able to successfully remove the heads of between 100 and 200 pigs and resuscitate their brains while detached from the body.

The organs were connected to a closed-loop system the scientists dubbed ‘BrainEX’ that pumped key areas with artificial oxygen-rich blood to sustain life.

In what Dr Sestan described as a ‘mind-boggling’ and ‘unexpected’ result, billions of cells in the brains were found to be alive and healthy.

He told the NIH it is possible the brains could be kept alive indefinitely and that additional steps could be taken to restore awareness, according to a report in the Massachusetts Institute of Technology’s Technology Review.

The neuroscientist said his team chose not to attempt either because ‘this is uncharted territory.’ 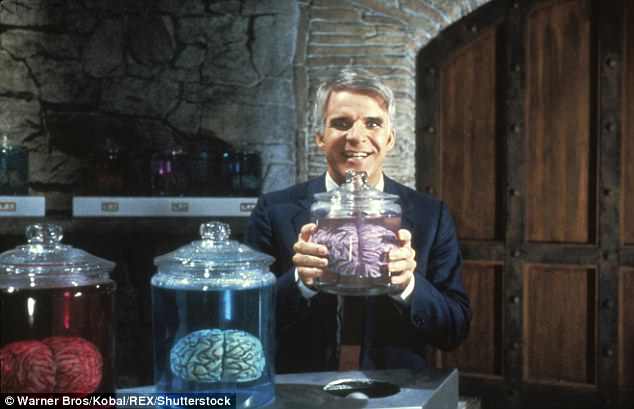 The brains of pigs survived for up to 36 hours after the animals had been decapitated. The results could one day lead to human brains that can live outside the body, a long fascination of science fiction – including the 1983 film ‘The Man With Two Brains’ (pictured)

Chemicals added to prevent swelling during the procedure would likely prohibit consciousness indefinitely.

This means it may not be possible for the team to resuscitate brains that can still ‘think’ using their current methods.

According to Dr Sesta, the brains they operated on were definitely not alive or conscious.

‘That animal brain is not aware of anything, I am very confident of that,’ he said, according to the MIT report.

Previous research has shown it is possible to keep the brains of a number of mammals alive after the organ is removed from the body.

HOW SOON WILL WE BE ABLE TO UPLOAD OUR MINDS TO A COMPUTER?

Brain and memory preservation has been explored at length by futurists, scientists and science fiction junkies alike.

Many say it falls under the category of ‘transhumanism.’

Transhumanism is the belief that the human body can evolve beyond its current form with the help of scientists and technology.

The practice of mind uploading has been promoted by many people, including Ray Kurzweil, Google’s director of engineering, who believes we will be able to upload our entire brains to computers by 2045.

Similar technologies have been depicted in science fiction dramas, ranging from Netflix’s Altered Carbon, to the popular series Black Mirror.

Another prominent futurist, Dr Michio Kaku, believes virtual reality can be used to keep our loved ones’ personalities and memories alive even after they die.

Scientists and futurists have different theories about how we might be able to preserve the human brain, ranging from uploading our memories to a computer to Nectome’s high-tech embalming process, which can keep it intact for thousands of years

‘Imagine being able to speak to your loved one after they die … it is possible if their personality has been downloaded onto a computer as an avatar,’ he explained.

These ideas haven’t been met without criticism.

McGill University Neuroscientist Michael Hendricks told MIT that these technologies are a ‘joke.’

‘I hope future people are appalled that in the 21st century, the richest and most comfortable people in history spent their money and resources trying to live forever on the backs of their descendants. I mean, it’s a joke, right? They are cartoon bad guys,’ he said.

Meanwhile, neuroscientist Miguel Nicolelis said recently that such technologies would be virtually impossible.

‘The brain is not computable and no engineering can reproduce it,’ he said.

‘You can have all the computer chips in the world and you won’t create a consciousness.’

In 1928 Soviet researchers severed the head of a dog and kept it partly alive by connecting key blood vessels to an artificial circulation machine.

A researcher at New York University kept a guine-pig brain alive in a special fluid for several days in 1993.

But the new research, which has been submitted for publication in a scientific journal, is the first time a pig brain has been kept alive outside of the body.

The experiment is signficiant because pig brains bare a striking similarity in the way they function to human brains.

According to Dr Steve Hyman, a brain researcher at the Broad Institute in Cambridge, Massachusetts, who was among those briefed on the work, the brain’s used in the study were technically alive.

He told Technology Review: ‘These brains may be damaged, but if the cells are alive, it’s a living organ.

‘It’s at the extreme of technical know-how, but not that different from preserving a kidney.’

But despite the breakthrough, transplanting a brain into a new body is still ‘not remotely possible,’ he added.