Carrier bag found 10,000m below the surface of the Pacific, in the world’s deepest ocean trench, is amongst 3,000 items that reveal the horror of plastic pollution

Divers have uncovered a plastic bag 10,898m (330,000ft) below the surface of the Pacific in the Mariana Trench, the world’s deepest ocean trench.

The plastic bag was one of 3,000 pieces of man made debris discovered by researchers studying records of deep ocean pollution dating back 30 years.

The find, made more than 1,000km (3,330ft) from the mainland, reveals the true horror of plastic pollution in the world’s oceans, environmental experts warn.

Scientists trawled global data, images and footage to make the discovery. The carrier bag in question was found deeper than 33 Eiffel towers, laid tip to base.

Information on debris was gathered by numerous international teams working around the world on 5,010 dives, using deep-sea submersibles and remote vehicles.

The plastic bag was singled out as the deepest and most extreme example of ocean debris uncovered by the research team. 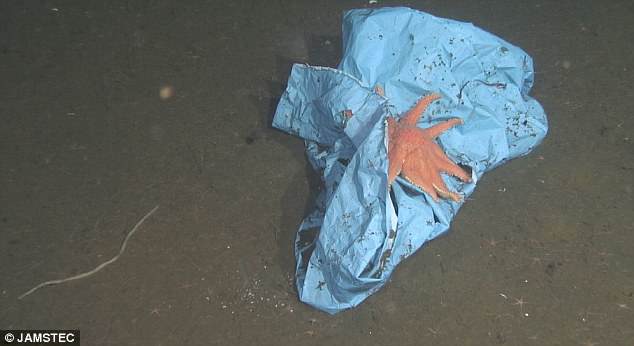 Human activities are affecting the darkest depths of the ocean say scientists studying 30 years of records of deep-sea plastic debris. This starfish was discovered living 467 metres below the surface on the bottom of the ocean, using a blue tarpaulin for shelter

Scientists from the Japan Agency for Marine-Earth Science and Technology (JAMSTEC) in Yokosuka used information from the Deep-sea Debris Database to make the discovery.

It was launched for public use by JAMSTEC’s global oceanographic data centre in 2017.

More than a third of debris found was macro-plastic, 89 per cent of which was from single-use products.

More than half of debris in ocean areas deeper than 6000m (20,000 ft) was plastic, almost all of which was single-use.

The results of this study show that deep-sea ecosystems are also being affected indirectly by human activities, according to the UN’s Environment World Conservation Monitoring Centre in Cambridge (UNEWCMC).

‘Deep-sea ecosystems are highly specific to the region they are found in and have a very slow growth rate, making the potential threats from plastic pollution are concerning,’ a spokesman said in a written statement.

‘There is growing concern that deep-sea ecosystems are already being damaged by direct exploitation of both biological and non-biological resources – through deep-sea trawling, mining and infrastructure development, for example.’ 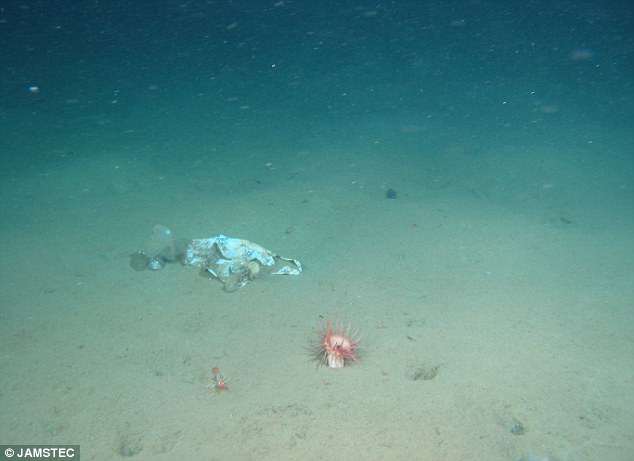 Experts discovered divers found a plastic bag 10,898m (330,000ft) below the surface of the Pacific Ocean in the Mariana Trench, the world’s deepest ocean trench. This plastic bag was  found 976 metres below sea level and dangerously close to marine organisms

Plastic pollution is emerging as one of the most serious threats to ocean ecosystems.

World leaders, scientists and affected communities have all called for urgent action, but the impacts of plastic pollution are not well understood.

Once in the deep-sea, plastic can persist for thousands of years.

The widespread distribution of single-use plastic, even to the greatest depths of the ocean, reveals a clear link between daily human activities and the remotest of environments, say UNEWCMC experts. 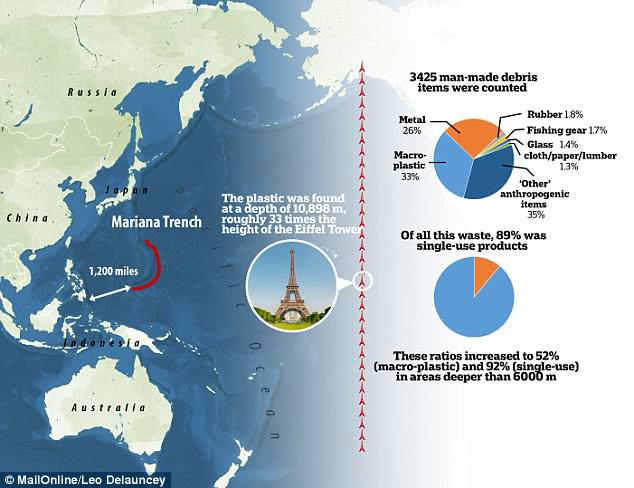 The carrier bag that was found in the Mariana Trench and was found deeper than 33 Eiffel towers, laid tip to base, would reach. Other items included plastic, metal, rubber and fishing gear

WHAT DOES THE DEEP-SEA DEBRIS DATABASE REVEAL ABOUT OCEAN PLASTIC POLLUTION?

The deepest part of the ocean is found in the Mariana Trench, located in the western Pacific Ocean, to the east of the Mariana Islands. It stretches down nearly 11,000 metres (36,100 feet) below the surface.

One plastic bag was found 10,898 metres (35,754 feet) below the surface in this region, the deepest known piece of human-made pollution in the world. This single-use piece of plastic was found deeper than 33 Eiffel towers, laid tip to base, would reach.

Whilst the plastic pollution is rapidly sinking, it is also spreading further into the middle of the oceans. A piece of plastic was found over 1,000 km (620 miles) from the nearest coast – that’s further than the length of France.

Of all man-made items found deeper than 6,000 metres (20,000 feet), the ratios increased to 52 per cent for macro-plastic and 92 per cent for single-use plastic. 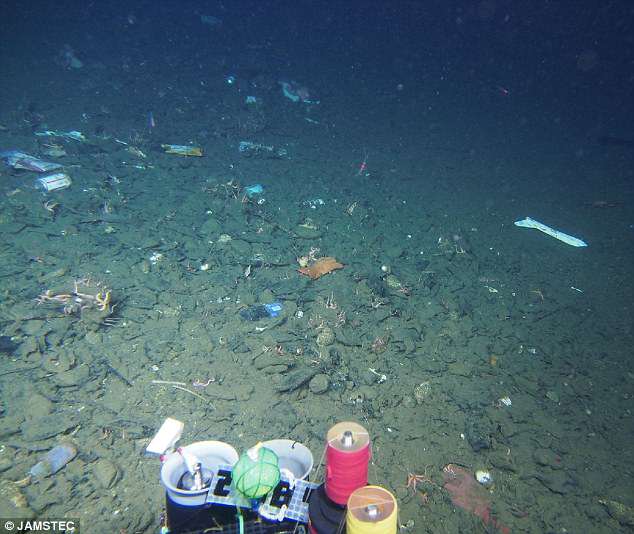 The plastic bag, found more than 1,000km (3,330ft) from the mainland, reveals the true extent of plastic pollution on the world’s oceans, researchers say. This site may resemble a landfill site, but is in fact off the coast of Japan and 581 metres below the surface

Impact assessment surveys should be prioritised for biologically and ecologically important areas with high concentrations of plastic debris, and to use ocean circulation models to identify how plastic is travelling from land to the deep-sea, they add.

The full findings of the study were published in the journal Marine Policy.