Almost 2,000 years after the eruption that killed thousands in Pompeii, city officials have begun putting together a new evacuation plan in case Mount Vesuvius erupts again.

The new plans after being drawn up after a recent increase in seismic activity raised fears of a second eruption in the area.

It would see residents evacuated to Sardinia by boat. 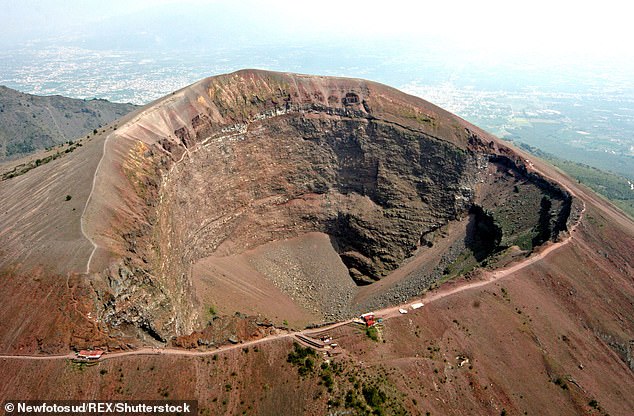 Pietro Amitrano, the mayor of Pompeii, said he was in talks with Sardinia’s civil protection authorities about a possible evacuation procedure, according to The Guardian.

‘We will start a detailed census of our population first and then discuss in which town in Sardinia our citizens will be transferred, hoping that this day will never come,’ he said.

The area around Vesuvius is populated by 3 million people, making it the most densely populated volcanic region in the world.

Last month Flavio Dobran, one of the leading experts on Vesuvius, warned that without a security plan, an eruption could kill thousands of people.

Dr Pete Rowley from the University of Portsmouth, recently told The Independent

‘Vesuvius is a really rather active volcano.

‘It’s famed for its eruption that wiped out Pompeii and Herculaneum, but it’s had something like 50 eruptions since then. With Naples next door it poses a quite substantial risk to the local population, so is carefully monitored.’ 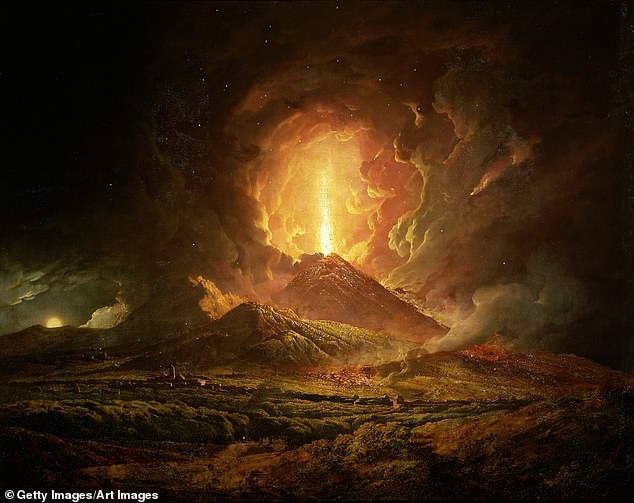 A painting depicts the eruption of Mount Vesuvius near modern-day Naples 2,000 years ago

The eruption of Mount Vesuvius 2,000 years ago may have killed people by blowing up their heads, a recent study of ancient skulls shows.

Material that poured from the volcano was so hot that it vaporised people’s blood, quickly turning it into steam.

It also boiled people’s brains, building up steam pressure in their heads until they exploded, according to a new analysis of remains found at Herculaneum – one of the closest cities to the 79 AD eruption.

The blast near modern day Naples is thought to have killed 16,000 people and buried Herculaneum and neighbouring town Pompeii in rock and deadly hot ash.

Researchers are also increasingly concerned about Campi Flegrei, a volcanic caldera to the west of Naples that last erupted centuries ago. 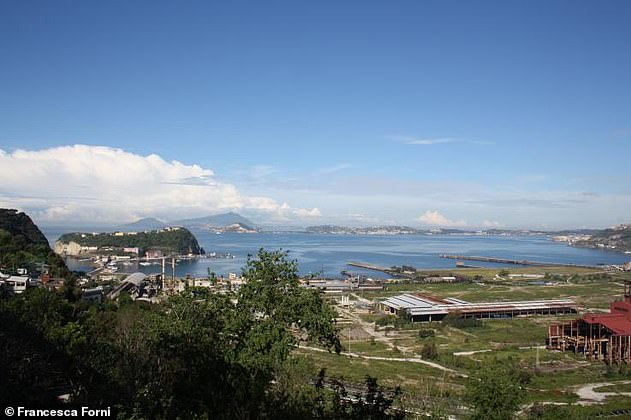 Campi Flegrei’s caldera (pictured) is found about nine miles to the west of Naples and is one of the few active supervolcanoes in the world. It has not erupted since 1538 but is capable of creating a ‘super-colossal’ eruption

The supervolcano in southern Italy is building huge magma reserves as it prepares to erupt at ‘some undetermined point in the future’, scientists say.

The vast Campi Flegrei volcano is made up of 24 craters and scientists have found it is accumulating the magma as part of a transition into a ‘pre-eruption’ phase.

Experts have said that an eruption is not expected in the imminent future but the volcano has shown signs of significant unrest over the last 60 years.

When the volcano eventually erupts it is likely to be comparable in size to the eruption of Mount Vesuvius that destroyed the cities of Pompeii and Herculaneum.