Climate change will affect poor countries the most, even though they are less responsible for contributing to global warming, report predicts

Poorer countries that have contributed to climate change the least will end up suffering the most consequences of the earth’s warming temperatures, new research claims.

Scientists from Wageningen University in the Netherlands examined swings in temperature on a local scale, with the aim of identifying regional ‘hotspots’ where there would be the greatest range between high and low temperatures.

They found that tropical countries, which tend to be poorer and emit less greenhouse gas than wealthier Northern Hemisphere countries will suffer major swings in temperatures, which is one of the biggest effects of climate change.

A study has found that poorer tropical countries that have contributed less to climate change are set to disproportionately suffer major swings in temperature. Pictured: changing magnitudes of temperature fluctuations until 2100

This phenomenon has been coined ‘climate-related inequality’.

‘There has been a lot of debate about how rich countries can help poor countries to adapt, but they have overlooked this aspect — that the impacts of climate variability change might be worse in the poorer countries,’ Sebastian Bathiany, a climate change researcher at Wageningen University in the Netherlands who led the research, told the Washington Post.

Thirteen of the wealthiest 15 countries by GDP are found in the Northern Hemisphere, and the US emits nearly 15 percent of global greenhouse gas emissions.

‘A growing body of climate-economy literature shows that poor countries are particularly vulnerable to weather and climate shocks, whereas rich countries tend to show no significant vulnerability,’ according to the study.

Researchers have identified the Amazon rainforest as a particular area of concern. 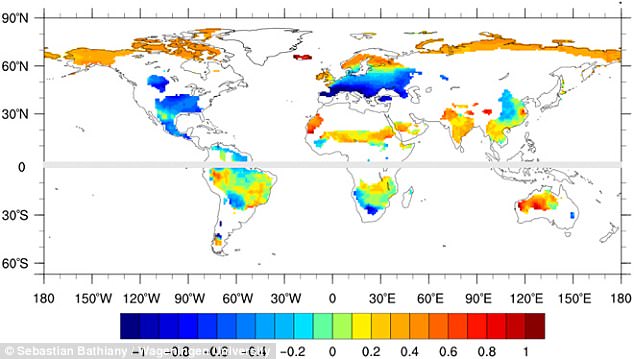 A factor in these predicted extreme temperature swings is the drying of tropical soils due to increased evaporation as temperatures rise. Pictured: Negative values indicate that changes are driven by soil drying, whereas positive values relates to variations in the atmosphere

The area is predicted to become a ‘hotspot’, suffering the largest magnitude of changes.

One factor in these predicted extreme temperature swings is the drying of tropical soils due to increased evaporation as temperatures rise.

As the soil gets drier, there will be less moisture to regulate the temperature swings.

The rapid changes in temperature could be dangerous for both agriculture and humans, as well as detrimental to the economy.

‘Tropical temperature fluctuations are not only strongly correlated with a temporal loss of agricultural output, as might be expected from anomalous weather affecting crop productivity and yields,’ the study says.

‘They also affect the economic growth rate of countries, leading to long-term economic disadvantages compared to the development of other nations.

‘Moreover, it has been argued that high temperatures favor political instability and conflict in tropical countries,’ the study concluded.

WHY ARE CLIMATE MODELS DIFFICULT TO PREDICT?

The main problem with climate models is uncertainty.

In particular, something called the ‘equilibrium climate sensitivity’ measure has been causing scientists a headache.

This is a highly influential measure that describes how much the planet will warm if carbon dioxide doubles and the Earth’s climate adjusts to the new state of the atmosphere.

Studies have found a wide range of possibilities for this key measure — somewhere between 1.5 and 4.5°C, with 3°C.

Most scientists try to constrain ECS by looking at historical warming events.

Warming less than 1°C is ‘extremely unlikely’ and more than 6°C is considered ‘very unlikely’, the panel has concluded.

However, some scientists dispute this figure.