Pulsar 1,630 light-years from Earth sending infrared across the stars

Mysterious pulsar 1,630 light-years from Earth in the ‘Magnificent Seven’ cluster is sending infrared radiation across the galaxy (and the neutron star is the first to exhibit the behaviour)

Pure infrared radiation from the spinning core of a collapsed star has been observed by scientists for the first time, claim the authors of a new study.

The neutron star, which is 1,630 light-years from Earth, can be found in the ‘Magnificent Seven’ cluster of pulsars.

Neutron stars are the collapsed, burnt-out cores of dead stars. Pulsars are essentially rotating, highly magnetised versions of these stars – left behind after a supernova explosion.

Radiation emissions from pulsars have been observed before, usually in X-ray and radio form, as these are the wavelengths which are typically the strongest.

Experts say this is the first time a pulsar has been found that only emits infrared wavelengths. Explaining the findings could change physicists’ understanding of how neutron stars form and evolve.

Pure infrared radiation from the spinning core of a collapsed star has been observed by scientists for the first time. One explanation is is that there is a disk of material, possibly mostly dust, surrounding the pulsar, slowing its rotation and heating it (Artist’s Impression Provided By Penn State)

Astronomers from Penn State university were part of a team that made the finding using Nasa’s Hubble Space Telescope, who suggest two possibilities to explain their observations.

The first is that there is a disk of material, believed to be primarily dust, surrounding the pulsar.

This ‘fallback disk’ of material would have gathered around the neutron star after the supernova explosion and would be composed of material leftover from the dead star.

Its interaction with the neutron star could have heated the pulsar and slowed its rotation, with the subsequent heat given off as infrared waves, scientists say.

The second possible explanation for the extended infrared emission from this neutron star is a ‘pulsar wind nebula.’

A pulsar wind can be produced when particles are accelerated in the electric field that is produced by the fast rotation of a neutron star with a strong magnetic field.

As the neutron star travels through space at greater than the speed of sound, a shockwave can form where space and the pulsar wind interact.

Shocked particles would then cause the extended infrared emissions that have been observed, experts suggest.

A second explamation involves a phenomenon called a pulsar wind (artist’s impression), produced in the electric field of a spinning neutron star.  As the neutron star travels through space at greater than the speed of sound, a shock can form where space and the pulsar wind interact

These stars are made of matter much more densely packed than normal and which give the entire star a density comparable to an atomic nucleus.

The diameter of our sun would shrink to less than 18 miles if it was that dense.

These give off radiation in a cone shaped beam which sweep across the sky like the light from a lighthouse as the star rotates.

When the beam sweeps over earth, it becomes visible as a pulsar, producing light that cycles every few seconds to just a few milliseconds.

Their rotational period is so stable that some astronomers use it to calibrate instruments and have proposed using it to synchronise clocks.

Since then other types of pulsars that emit x-rays and gamma rays have also been spotted.

‘This particular neutron star belongs to a group of seven nearby X-ray pulsars – nicknamed “the Magnificent Seven” – that are hotter than they ought to be considering their ages and available energy reservoir provided by the loss of rotation energy,’ said Bettina Posselt, associate research professor of astronomy and astrophysics and the lead author of the paper.

‘We observed an extended area of infrared emissions around this neutron star – named RX J0806.4-4123 – the total size of which translates into about 200 astronomical units, or 2.5 times the orbit of Pluto around the Sun – at the assumed distance of the pulsar.’

Although neutron stars are generally studied in radio and high-energy emissions, such as X-rays, this study demonstrates that new and interesting information about neutron stars can also be gained by studying them in the infrared.

Using the new Nasa James Webb Space Telescope, due to launch in 2021, astronomers will be able to further explore this newly opened discovery space in the infrared to better understand neutron star evolution. 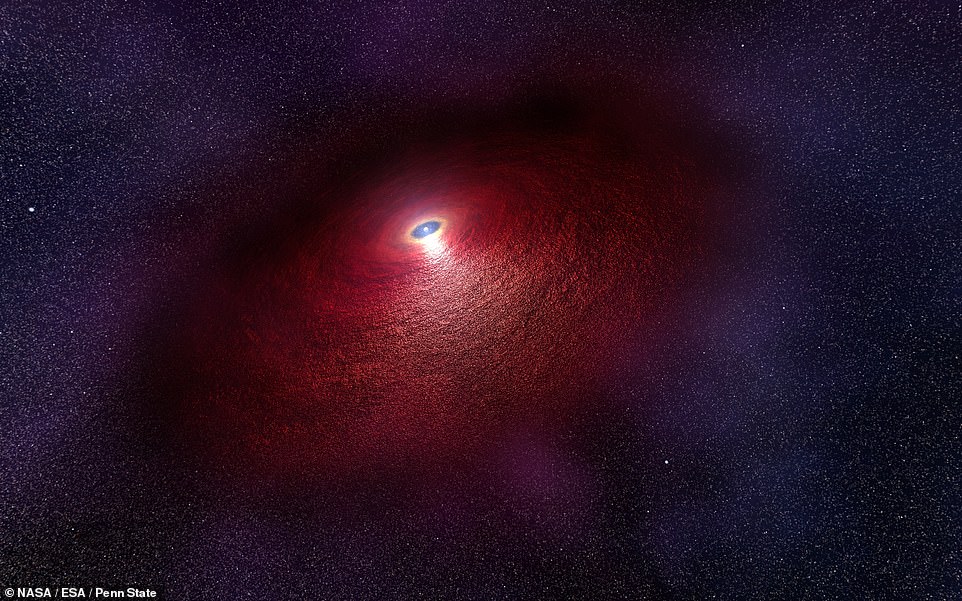 Although neutron stars are generally studied in radio and high-energy emissions, such as X-rays, this study demonstrates that new and interesting information about neutron stars can also be gained by studying them in the infrared. Artist’s impression of the spinning disk theory 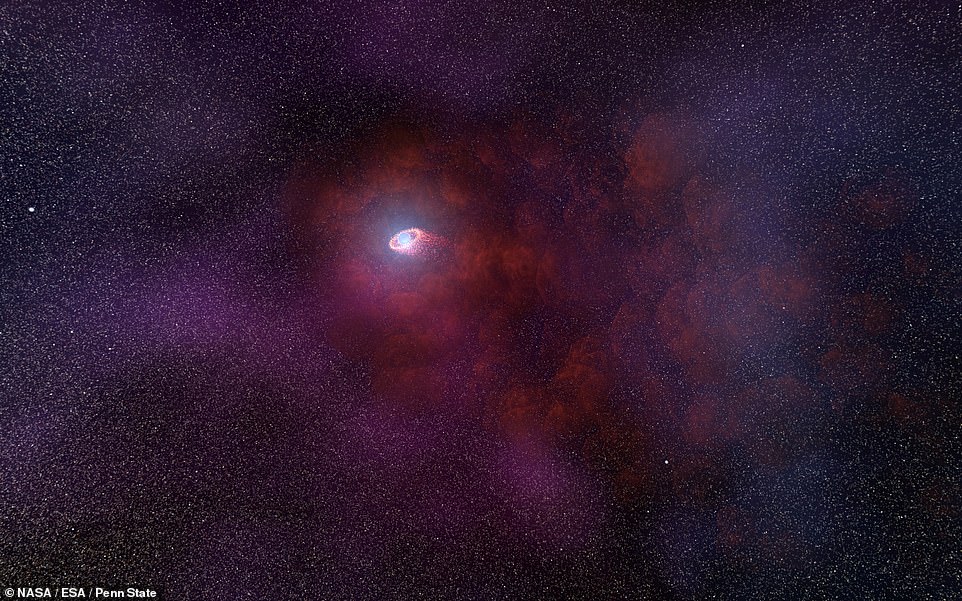 Using the new Nasa James Webb Space Telescope, due to launch in 2021, astronomers will be able to further explore this newly opened discovery space in the infrared to better understand neutron star evolution. This is an illustration of the pulsar wind nebula theory in action 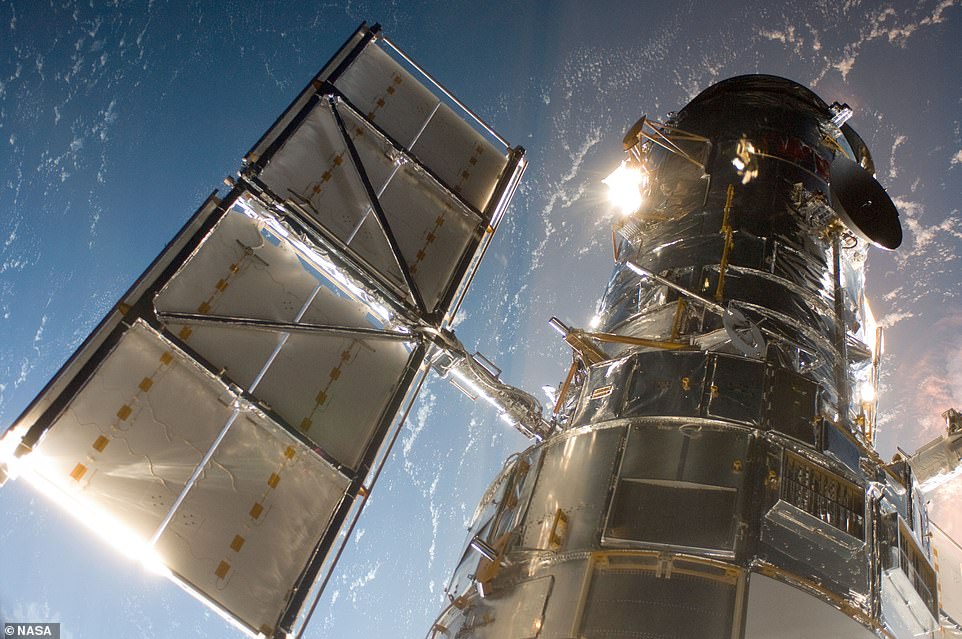 Pictured is the Hubble Space Telescope, photographed during a Servicing Mission 4 crewmember just after the Space Shuttle Atlantis captured Hubble with its robotic arm on May 13, 2009, beginning the mission to upgrade and repair the telescope. Experts from Penn State were able to observe the pulsar 1,630 light-years from Earth using data from the Hubble

WHAT ARE NEUTRON STARS?

Neutron stars are the collapsed, burnt-out cores of dead stars.

When large stars reach the end of their lives, their core will collapse, blowing off the outer layers of the star.

This leaves an extremely dense object known as a neutron star, which squashes more mass than is contained in the sun into the size of a city.

A neutron star typically would have a mass that’s perhaps half-a-million times the mass of the Earth, but they’re only about 20 kilometres (12 miles) across.

A handful of material from this star would weigh as much as Mount Everest.

They are very hot, perhaps a million degrees, highly radioactive, and have incredibly intense magnetic fields.

This makes them arguably the most hostile environments in the Universe today, according to Professor Patrick Sutton, head of Cardiff University’s gravitational physics department.

The dense objects, in particular their cores, are key to our understanding of the universe’s heavy elements.

‘One theory is that there could be what is known as a “fallback disk” of material that coalesced around the neutron star after the supernova,’ she added.

‘Such a disk would be composed of matter from the progenitor massive star.

‘Its subsequent interaction with the neutron star could have heated the pulsar and slowed its rotation.

‘If confirmed as a supernova fallback disk, this result could change our general understanding of neutron star evolution.

‘A  pulsar wind nebula would require that the neutron star exhibits a pulsar wind.

The full findings of the study were published in The Astrophysical Journal.

WHAT IS A SUPERNOVA AND HOW DOES IT FORM?