A baby seal has died a slow and painful death off the coast of Britain after being killed by a piece of plastic ‘the size of a sweet wrapper’.

The Harp Seal is a rare visitor to UK waters and prefers to spend its time in the icy Arctic sea.

But the seal was found dead, stranded on a beach on the Isle of Skye.

A necropsy of the seal – believed to be just one years old – found a small piece of plastic around a square inch in size (6cm square) in its stomach, which is thought to have caused a fatal blockage. 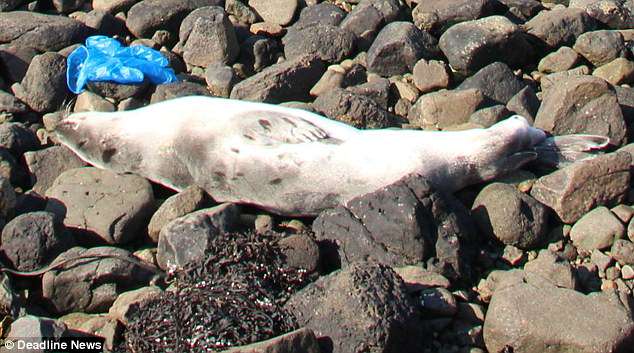 A rare seal died off the coast of Britain – killed by a piece of plastic ‘the size of a sweet wrapper’. Pictured is the dead seal washed up on the coast of the Isle of skye. The Harp Seal is a rare visitor to UK waters

The Scottish Marine Animal Strandings Scheme said in a statement: ‘There was a small piece of compacted plastic, roughly 6cm square lodged in the stomach.

‘There was mild ulceration around the impaction site, indicating the fragment had been stuck in place for some time and could have potentially impaired normal functioning of the stomach emptying.’

It added that there were further signs the plastic had stopped the stomach emptying normally.

While not endangered – there are nine million seals at all breeding sites – scientists from the SMASS said: ‘Seeing the plastic lodged in the stomach was yet another reminder of the impact of plastic pollution in the marine environment. 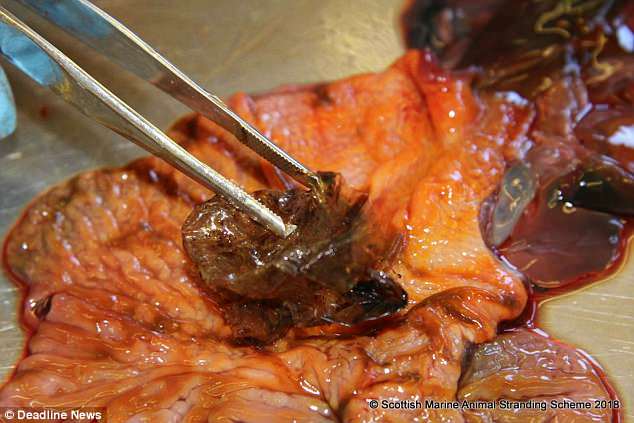 An autopsy of the seal – believed to be just one years old – found a small piece of plastic around a square inch (6cm square) in its stomach (pictured), which is suspected to have caused a fatal blockage 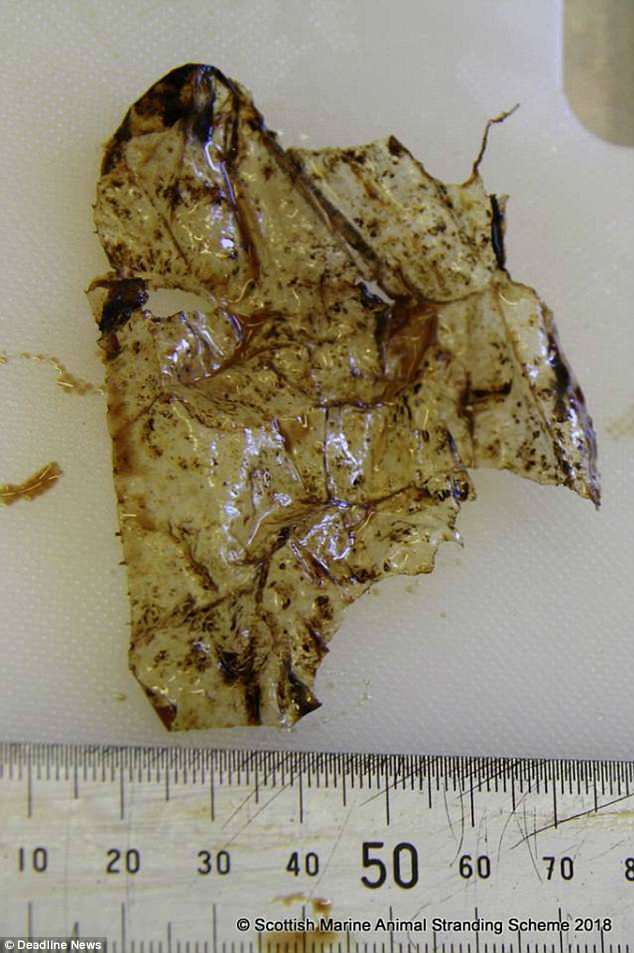 ‘Death due to plastic ingestion appears thankfully incredibly rare in cetaceans and seals, but in this case it is plausible this hungry pup mistook this small bit of floating plastic for food.

‘Once in the stomach, it would not be broken down, and became partially lodged in the narrow opening into the intestine.

‘A healthy fit, pup would probably have been able to safely manage ingesting a fragment of plastic this size, but in an already compromised animal it could have been influential in its death.

‘We are in the process of running additional tests, but this case again highlights the problem of marine debris floating around in our oceans – for a weakened seal pup such as this, even a piece of plastic the size of a sweet wrapper is potentially fatal.’ 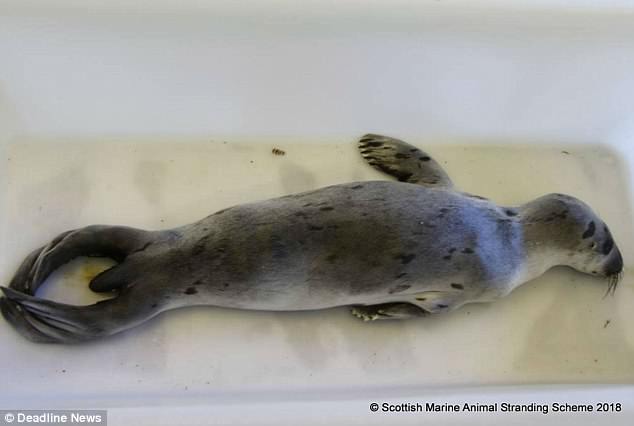 There was mild ulceration around the impaction site, indicating the fragment had been stuck in place for some time. There were further signs that the plastic had stopped the stomach emptying normally 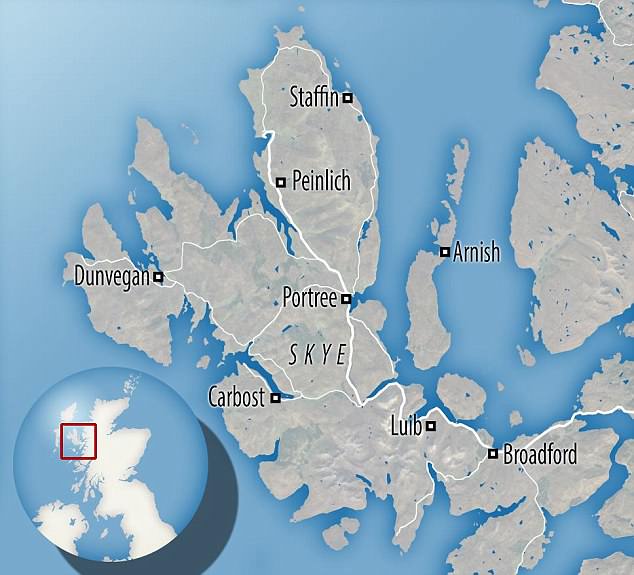 This comes after a grey seal who got his neck caught in a discarded fishing net around 13 miles north of Great Yarmouth, Norfolk, on Monday.

The young adult male was found with a 10ft (three metre) tangle of old plastic netting and rope wrapped tightly round his neck, and has an infected wound that goes three quarters of the way round.

He was rescued by the Friends of Horsey Seals charity at Horsey and is being cared for at the RSPCA’s East Winch Wildlife Centre near King’s Lynn.

Alison Charles, centre manager, said: ‘This is a horrendous injury and the poor seal has been fighting for his life. 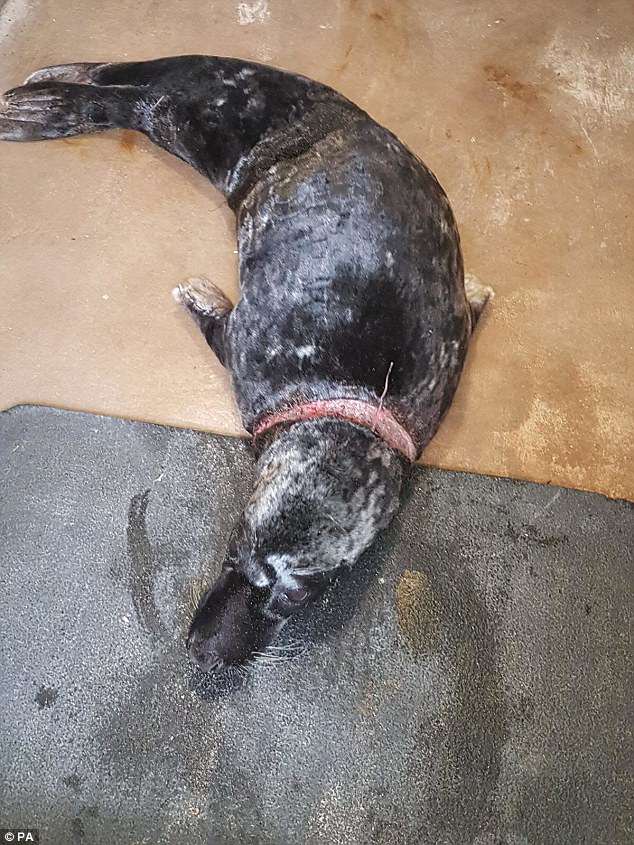 A young adult male was found with a 10ft (three metre) tangle of old plastic netting and rope wrapped tightly round his neck on Monday. It has an infected wound that goes three quarters of the way round

‘He’s extremely emaciated – probably half the weight he should be.

‘When he arrived here, he was exhausted and wouldn’t move. We didn’t think he would make it through the night.’

She said staff removed the nylon netting from the seal’s neck, put him on antibiotics and pain relief and it now seems he may have turned a corner.

‘He has even started eating again,’ she said. ‘Though we’re taking it one step at a time.’

Ten years ago in February, the Mail launched a trailblazing campaign to rid Britain of the scourge of plastic supermarket bags — prompted by a heartrending, shaming picture of an endangered turtle entangled in one, which was used on the front page.

The success of our Banish The Bags initiative has been nothing short of phenomenal.

Now, in a landmark series that could have just as big an impact as that front page a decade ago, we’re here to assure you that you really can make a difference — and your actions can help save our beautiful world and its animals.

The Mail’s Turn The Tide On Plastic campaign isn’t intended to make you feel guilty about plastic you depend on. Instead, this series will guide you through small daily steps you can take — with little expense or effort — to make dramatic inroads into reducing the amount of plastic you use.

Even simply changing one habit — such as using the reusable coffee cup we’re giving away today, instead of a throwaway cup — will help decrease the demand for new plastics. If every Daily Mail reader uses their cup just once a day in place of a takeaway cup, millions of plastic-lined paper cups will be saved from landfill in a year.

It’s simple maths. Use a plastic bag twice and you halve your plastic footprint. Buy one bar of soap and you may spare the planet two or even three pump-action hand wash bottles. Inspire someone else and the impact is doubled.

We’ll tell you how to double your recycling efficiency overnight, banish plastic from your kitchen and dodge food packaging. Better yet, you can even shop to save the planet with gorgeous — and reusable — plastic alternatives.

It’s never too late to start…