Real-life Black Mirror: China to launch its citizen scorecards by 2020

Black Mirror is almost a reality: China says it’s on track to launch its dystopian scorecard system that ranks citizens on every aspect of their behaviour by 2020

It sounds eerily similar to the plot of an episode of Charlie Brooker’s popular dystopian science fiction series Black Mirror.

But China’s controversial social credit system – in which all of its 1.4 billion citizens are ‘ranked’ on their behaviour in real-time – is on track to launch by 2020.

Completing community service and buying Chinese products is thought to improve your social standing, which is given as a score out of 800.

Those rated ‘top citizens’ get VIP treatment at airports, discounted loans, waived deposits on hotel and car rentals and fast-tracking to elite universities.

Fraud, tax evasion and smoking in non-smoking areas can drop your ranking, as well as buying items in supermarkets that the government doesn’t approve of – such as alcohol or video games.

Those with a low social score are barred from the best jobs, cut off from high-speed internet and even blocked from sending their children to top schools.

China is planning to use a network of up to 600 million AI-powered surveillance cameras dotted around its major cities to enforce the system.

The programme has already completed successful trials in provinces across China, and is bolstered by facial recognition, body scanning and geo-tracking technology. 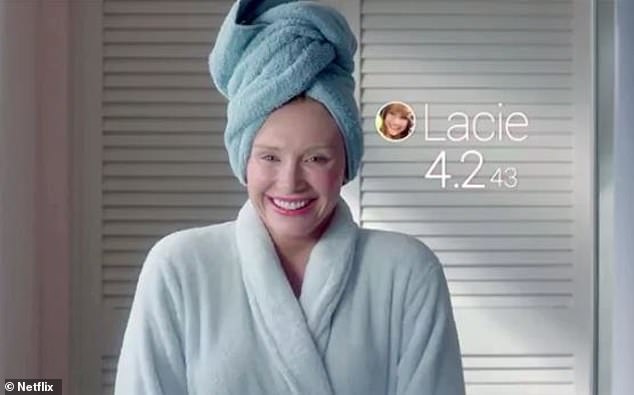 Pictured is Lacie, played by Dallas Howard, in the Black Mirror episode Nosedive. Characters in the episode have a social score that updates in real-time as they perform actions deemed good or bad. China’s government has developed a similar system for its citizens

This real-time tracking is combined with citizens’ individuals’ government records – including their medical, educational and financial histories.

China’s Communist Party calls the system ‘social credit’ and says it will be fully operational by 2020, according to a new report from ABC.

Within years, an official Party outline claims, it will ‘allow the trustworthy to roam freely under heaven while making it hard for the discredited to take a single step’.

The programme echoes the 2016 Black Mirror episode Nosedive, in which citizens assemble a social score based on how others rate them in day-to-day interactions.

This is all made possible by China’s ever-expanding surveillance network, which currently boasts 200 million AI-powered cameras.

China hopes to triple this number before the scorecard system’s launch.

Xu Li, CEO of Sensetime, one of China’s most successful artificial intelligence companies, said: ‘It can recognise more than 4,000 vehicles.

‘We can tell whether it is an adult, a child, male or female.’

China launched a pilot version of the scheme in 2010 in a province just north of Shanghai.

This pilot system provides incentives for those with a high social credit score such as priority access to public housing, travel visas and job promotions.

Liu Hu, a journalist in China, told CBS News that when he tried to book a flight, he was told he was banned from flying because he was on a list of untrustworthy people.

Mr Liu was issued with a court order to apologise for a series of tweets he wrote and was then told his apology was insincere.

As a result his score dropped and he found himself on the list of undesirables.

HOW CAN CHINESE CITIZENS INCREASE THEIR ‘SOCIAL CREDIT SCORE’?

China launched a pilot version of the scheme in 2010 in a province just north of Shanghai.

Details as to how it works and the algorithm it uses are thin on the ground but certain behaviours have been found to be beneficial to boosting the score.

Completing community service and buying Chinese products is thought to improve it whereas fraud, tax evasion and smoking in non-smoking areas can drop it.

Companies that pay their takes on time and any bills also receive favour from the system, improving their social credit standing.

In the pilot system, incentives are provided for those with a high social credit score.

‘I can’t buy property. My child can’t go to a private school,’ he said.

‘You feel you’re being controlled by the list all the time.’

According to Ken Dewoskin, an expert in China’s economic and political culture, revealed in an interview the damage and implications this system could have.

He says how the new scoring system truly works is kept secret and could be easily abused by the government.

Mr Dewoskin said: ‘The government and the people running the plan would like it to go as deeply as possible to determine how to allocate benefits and also how to impact and shape their behaviour.’ 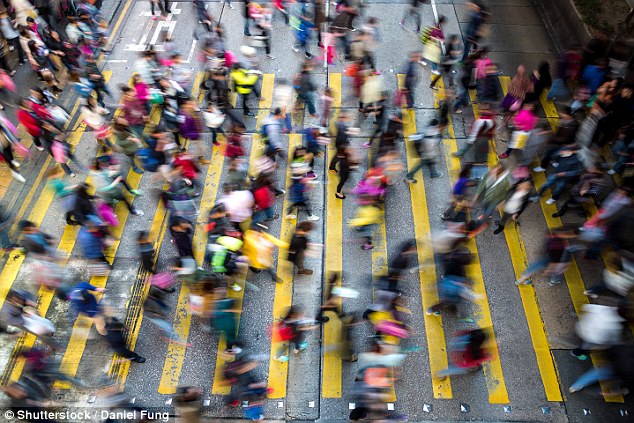 China’s controversial social credit system – in which all of its 1.4 billion citizens are ‘ranked’ on their behaviour in real-time – is on track to launch by 2020 (stock image)

The system raises ethical concerns, with scholars debating the morale issues created by such a universal and publicly accessible database.

Experts published research last year in the journal Marketing Intelligence and Planning which looked at how the gamification of life would affect people.

They claim the system could be manipulated by the government to create universal conformity to the ideologies presented by the ruling communist party.

Audrey Murrell, Director of the David Berg Center for Ethics and Leadership at the University of Pittsburgh, wrote in an article for Forbes: ‘It is one thing to reward positive behaviour.

‘But one could argue that the introduction of penalties for “untrustworthiness” produces consequences for lack of adherence to government-mandated social behaviours.’