Analysis of two extinct ancient hominins found a complex picture when trying to find how primitive hominins evolved to walk on two legs.

Analysis of leg bones found an older species likely walked on two legs but a more modern species spent a lot of time in the trees.

This convoluted timeline points to a diverse evolution of locomotion culminating in the upright humans that walk Earth today. 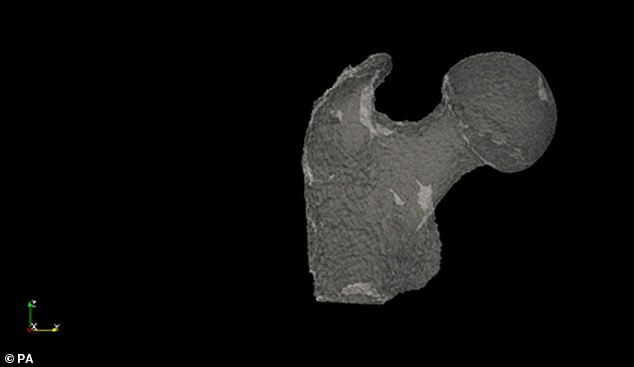 Pictured, the internal bone structure of the head of the femur of a gorilla. A similar structure was seen in a relatively recent human ancestor indicating a complex route to the two-legged animals we see today 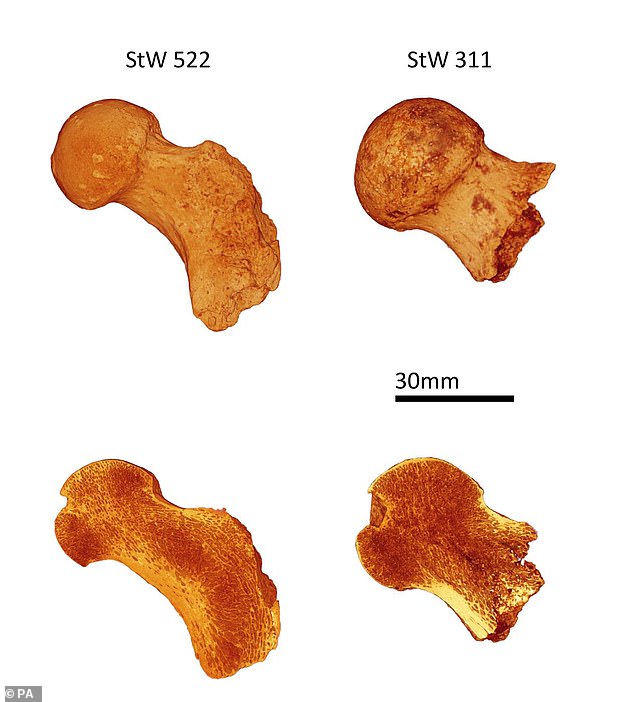 Pictured, CT-based digital renderings of the StW 522 (Australopithecus africanus, left) and StW 311 (Paranthropus, RIGHT) fossils. The top two images show the fossils as they are preserved. The bottom two images show a cross-sections through the fossils to reveal the trabecular bone, whose distribution reveals these individuals practiced different frequencies of climbing

An older fossil, belonging to Australopithecus africanus that lived up to 2.8million years ago, had a bone structure similar to its more modern counterparts.

But a younger fossil, belonging to an unknown species thought to be Paranthropus robustus or early Homo regularly adopted highly flexed hip joints — indicative of tree-dwelling species such as orangutans and chimpanzees.

Hominins are members of the human family tree more closely related to one another than to apes.

Today, only one species of this group remains, Homo sapiens, to which everyone on Earth belongs.

The study, led by the University of Kent, analysed and compared the internal bone structures of two fossil leg bones from South Africa, discovered more than 60 years ago and believed to have belonged to a creature which lived between one and three million years ago.

For both fossils, the external shape of the bones were very similar, showing a more human-like than ape-like hip joint, suggesting they were both walking on two legs.

The researchers also examined the internal bone structure, because it remodels during life based on how individuals use their limbs. 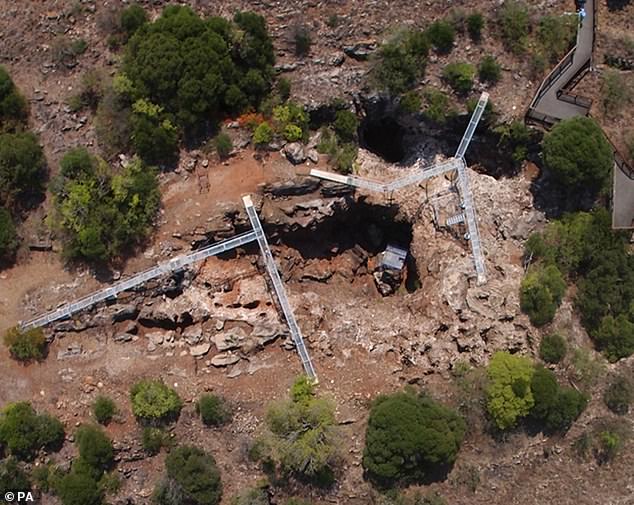 Pictured, an aerial photograph of the site where the fossils were found and analysed in SOuth Africa

But when they analysed the inside of the spherical head of the thigh bone, it showed they were loading their hip joints in different ways.

The study, published in Proceedings of the National Academy of Sciences, was led by Dr Leoni Georgiou, Dr Matthew Skinner and Professor Tracy Kivell at the University of Kent’s School of Anthropology and Conservation.

Dr Georgiou said: ‘It is very exciting to be able to reconstruct the actual behaviour of these individuals who lived millions of years ago and every time we CT scan a new fossil it is a chance to learn something new about our evolutionary history.’

Dr Skinner said: ‘It has been challenging to resolve debates regarding the degree to which climbing remained an important behaviour in our past.

‘Evidence has been sparse, controversial and not widely accepted, and as we have shown in this study the external shape of bones can be misleading.’

ancestors, hav, human, May, Recent
You may also like: