NASA astronaut Christina Koch gave a delighted thumbs up as she was pulled from the space capsule that brought her back to Earth this morning, having shattered the record for the longest time spent in space by a female astronaut.

Koch touched down in desert near Dzhezkazgan, Kazakhstan with colleagues Luca Parmitano of the European Space Agency and Alexander Skvortsov of the Russian space agency at 09:12 GMT after she spent 328 days on the International Space Station.

On December 28, the 41-year-old Michigan-born engineer and astronaut surpassed the previous record set for a single spaceflight by a woman – 289 days, held by NASA veteran Peggy Whitson since 2017.

The Soyuz crew ship containing all three astronauts parachuted to a safe landing on the snowy desert of Dzhezkazgan at 4:12am EST (09:12 GMT on Thursday).

The three astronauts were extracted from the Soyuz capsule before 10:00am GMT and are undergoing post-landing medical checks before travelling aboard Russian helicopters to Karaganda, Kazakhstan. 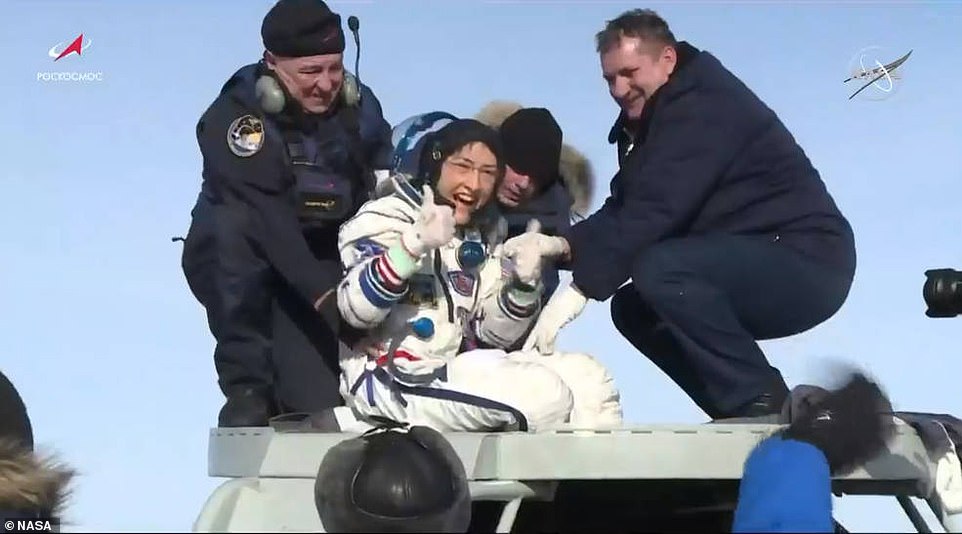 NASA astronaut Christina Koch gives a thumbs up and a huge smile after a 328-day mission with 5,248 orbits of Earth, a journey of 139 million miles and roughly the equivalent of 291 trips to the Moon & back

Koch and Parmitano will board a NASA plane bound for Cologne, Germany, where Parmitano will be greeted by ESA officials for his return home, while Koch will continue home to Houston.

Skvortsov will board a Gagarin Cosmonaut Training Center aircraft to return to his home in Star City, Russia.

Koch completed her 328-day mission with 5,248 orbits of Earth, a journey of 139 million miles and roughly the equivalent of 291 trips to the Moon and back.

As well as breaking the record for longest continuous time in space by a woman, Koch also ranks seventh on the list for overall time spent in space by US astronauts.

Koch had already made history back in October when she became one half of the first-ever all-woman spacewalk along with NASA counterpart Jessica Meir.

Koch and Meir conducted two more spacewalks together in January.

Koch told NBC on Tuesday that she would ‘miss microgravity’ as she answered questions from journalists ahead of her three-and-a-half hour journey back to Earth. 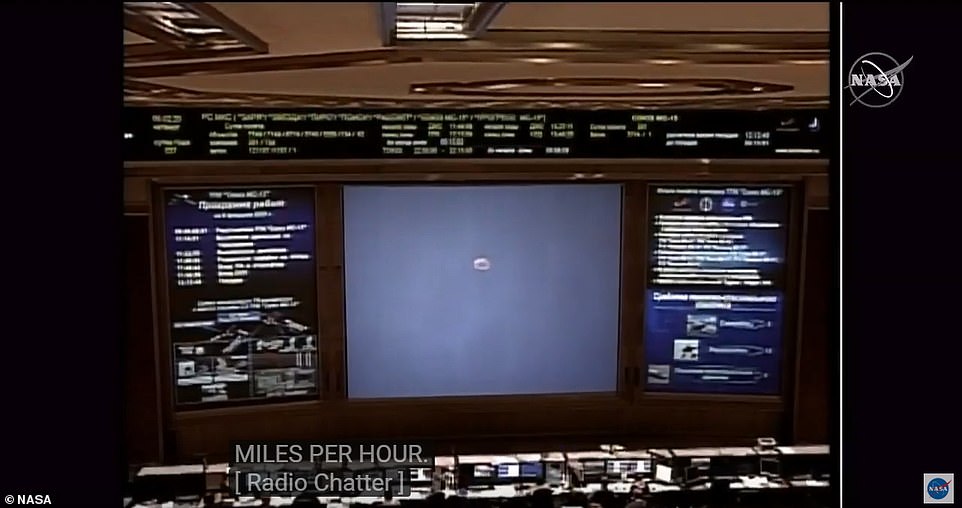 Mission Control Moscow in Korolyov, Russia tracks the movement of Soyuz as it glides smoothly and safely towards Earth 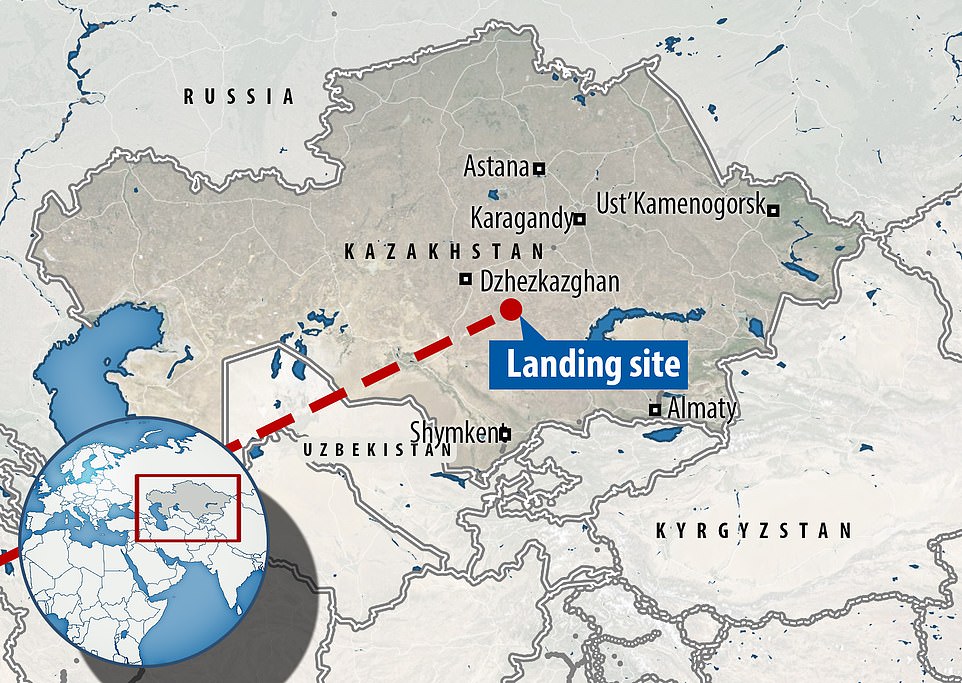 The Soyuz crew ship containing all three astronauts parachuted to a safe landing on the snowy desert of Dzhezkazgan at 4:12am EST (09:12 GMT on Thursday) and are undergoing post-landing medical checks before travelling aboard Russian helicopters to Karagandy

‘It’s really fun to be in a place where you can just bounce around between the ceiling and the floor whenever you want,’ she said, smiling as she twisted her body around the ISS.

Koch called three-time flyer and previous record holder Whitson ‘a heroine of mine’ and a ‘mentor’ in the space programme.

She also spoke of her desire to ‘inspire the next generation of explorers’.

NASA said Koch’s mission will provide researchers with data on how the weightlessness of gravity and space radiation affects the female body on long-duration spaceflights.

The results could prove useful for the US space agency’s aim of building a permanent space station on the Moon’s surface within the next decade. 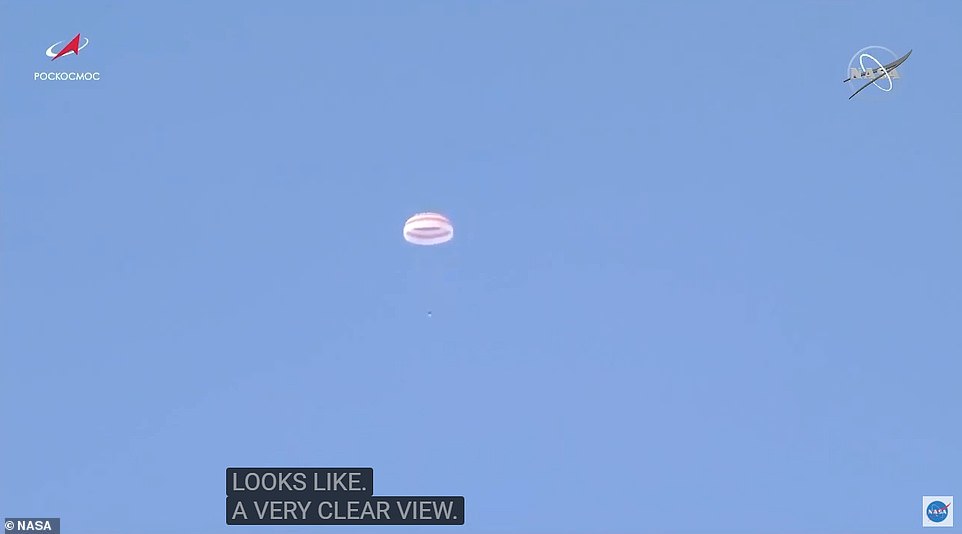 The Soyuz crew capsule sails through the Kazakhstan sky in its descnt towards the Dzhezkazgan desert, containing Koch, Luca Parmitano of the European Space Agency and Alexander Skvortsov of the Russian space agency 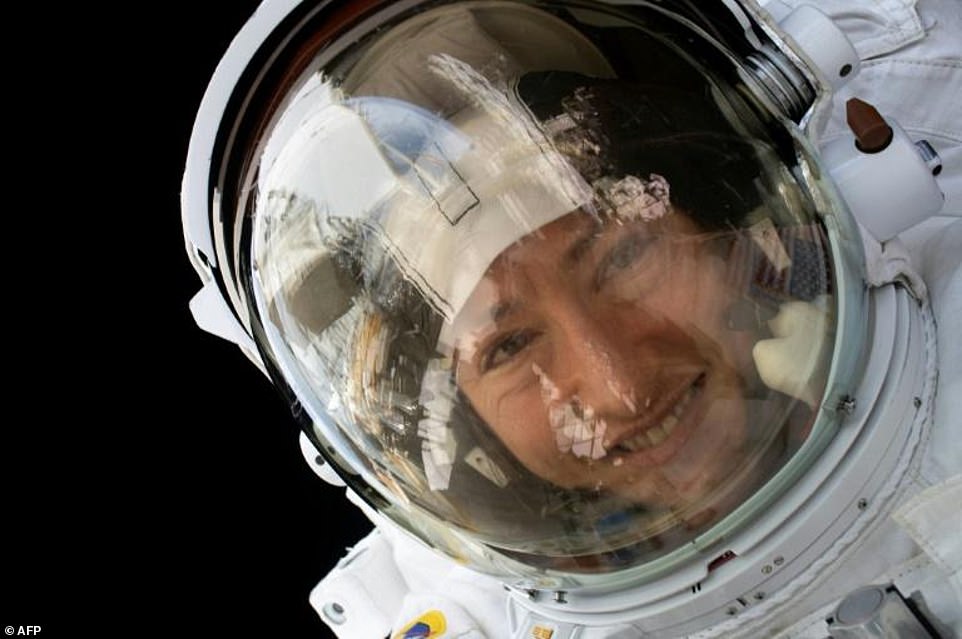 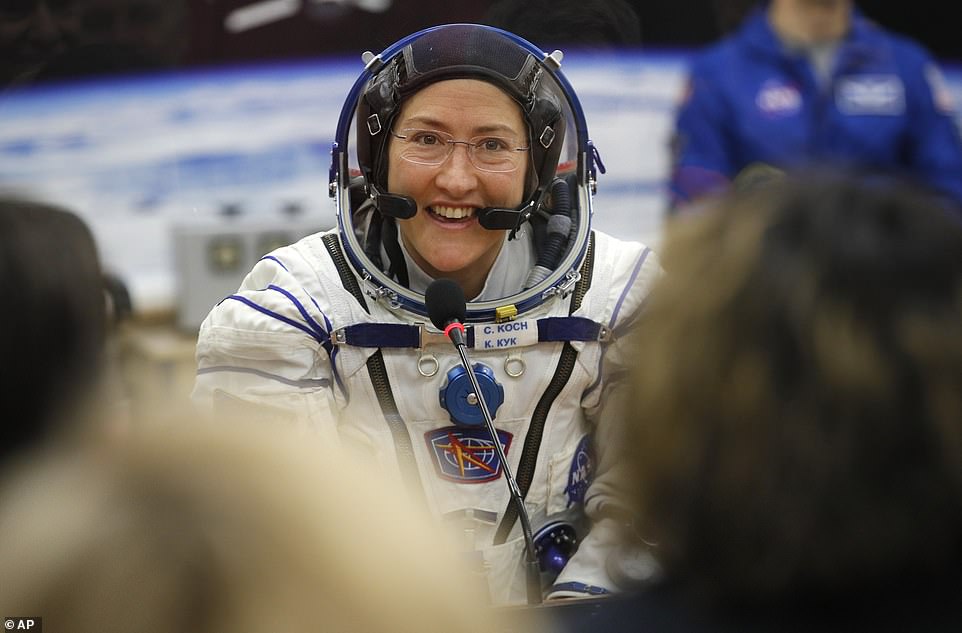 US astronaut Christina Koch, member of the main crew of the expedition to the International Space Station (ISS), speaks with her relatives through a safety glass prior the launch of Soyuz MS-12 space ship back in March 2019

The first woman in space was Soviet cosmonaut Valentina Tereshkova whose spaceflight in 1963 is still the only solo mission carried out by a woman.

But the astronauts Russia has sent to the ISS since expeditions began in 2000 have all been men with the exception of Yelena Serova in 2014.

Both Tereshkova and Serova are now lawmakers in the Russian parliament, where they represent the ruling United Russia party. 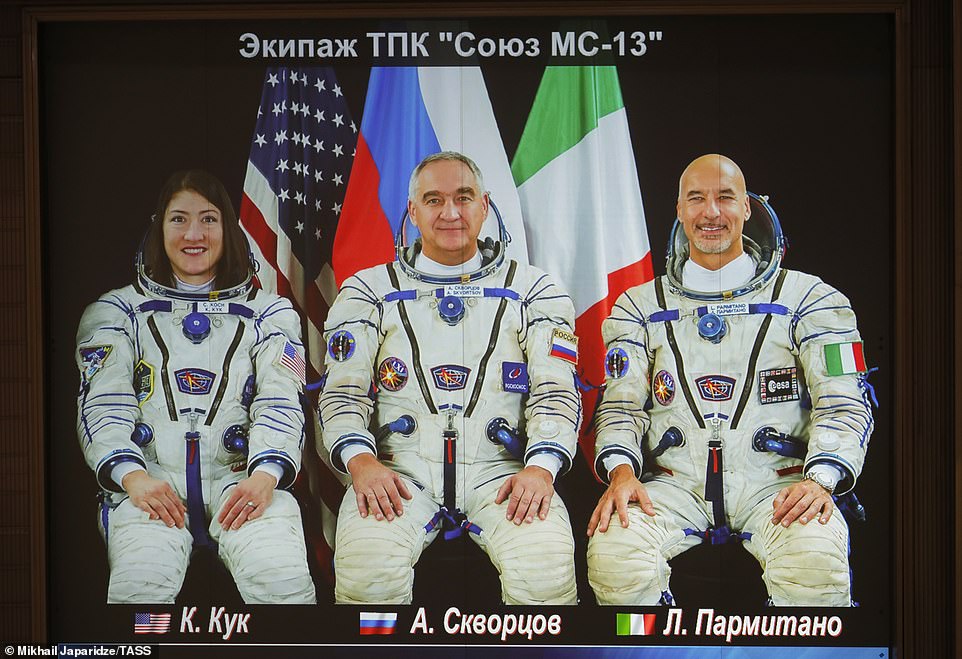 Unlike Koch, whose stay aboard the ISS was extended, her fellow ISS inhabitants Parmitano and Skvortsov are rounding off regular six-month missions.

Parmitano handed over command of the ISS to Roscosmos’ Oleg Skripochka on Tuesday.

The 43-year-old Italian posted regular shots of the Earth while aboard, highlighting the plight of the Amazon rainforest and poetically describing the Alps as ‘like a spinal column, never bending to time’. 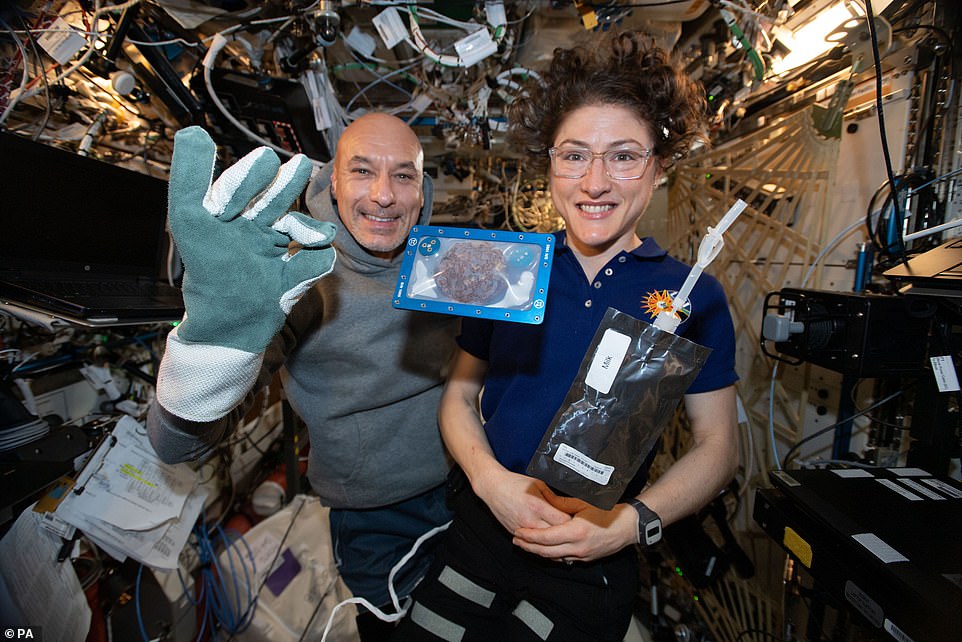 Four male cosmonauts have spent a year or longer in space as part of a single mission with Valery Polyakov’s 437 days the overall record.

Scott Kelly holds the record for a NASA astronaut, posting 340 days at the ISS before he returned home in 2016.

Koch’s return comes after an advert produced by the skincare brand Olay ran during an intermission in the American football Super Bowl with a call to ‘make space for women’.

The advert featured NASA astronaut Nicole Stott and saw the company promise to donate up to $500,000 to the non-profit Women Who Code, which works with young women seeking careers in tech and scientific fields.

This year’s Super Bowl was watched by over 100 million people while advert space costs more than $5 million for a 30-second commercial.

WHEN IS NASA GOING BACK TO THE MOON?

In a statement in March, NASA Administrator Jim Bridenstine doubled down on plans to send humans first to the moon and then to Mars and said NASA is on track to have humans back on the moon by 2028.

The plan relies on the developing Space Launch System and Orion spacecraft, along with the Gateway orbital platform.

SLS and Orion are expected to be ready for their first uncrewed test flight in 2020.

Construction on Gateway – an orbiting lunar outpost – is expected to begin as soon as 2022.

‘We will go to the Moon in the next decade with innovative, new technologies and systems to explore more locations across the lunar surface than ever before,’ Bridenstine said.

‘This time, when we go to the Moon, we will stay.

‘We will use what we learn as we move forward to the Moon to take the next giant leap – sending astronauts to Mars.’

Vice President Mike Pence, however, tore up these plans and statements when he unexpectedly revealed a new deadline in March stating intentions to put humans on the moon by 2024 – four years earlier.

NASA administrator Jim Bridenstine added a week later, at the start of April, that the agency would get ‘really close’ to delivering a plan by April 15.

This has been missed by several weeks and the House Science Committee is now vocalising its displeasure at having no viable plan or programme from the space agency.