The remains of a 500-year-old ship that is so ‘astonishingly preserved’ it looks like it ‘sank yesterday’ were revealed today following its discovery on the ocean floor.

Experts found the incredible shipwreck – located 24 nautical miles from the Swedish coast – while scanning the icy depths of the Baltic Sea with a sonar device.

Now, further investigations by a team of international scientists, including a group from the University of Southampton, have revealed its pristine remains using underwater robotic technology.

The vessel, which dates back to the Late 15th or early 16th Century, still has its masts in place, swivel guns on deck and even parts of its rigging remain.

This, experts believe, is because a lack of oxygen in icy depths helps to deter sea animals from ravaging the remains. 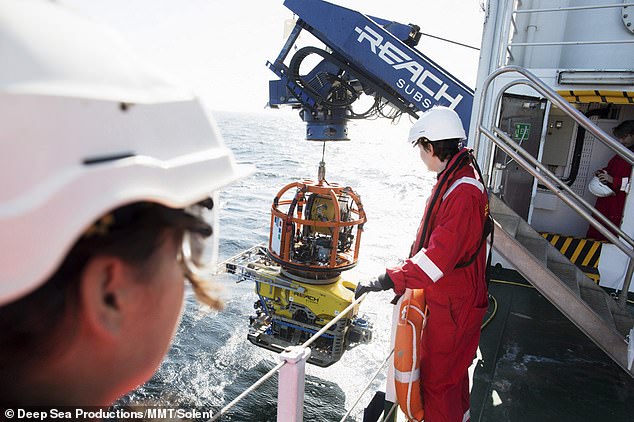 Incredible: Maritime experts look on as the ROV hangar is launched from Stril Explorer, helping to retrieve the shipwreck from the icy depths of the Baltic Sea

WHAT DID THEY FIND?

The vessel is older than previous historic findings, including the warship Mars, which was blown to pieces in the Firs Battle of Öland in 1564, and Henry the VIII’s Mary Rose, built in 1510.

Unlike the Mars warship, which had its remains scattered after being blown to pieces, this unnamed, newly discovered vessel has its hull almost completely intact.

Underwater imagery also shows other rare discoveries, including a wooden capstan, used to reel in rope for the mast, and bilge pump.

It even has its masts in place, swivel guns on deck and parts of its rigging.

Also still on the deck is the ‘incredibly rare’ tender boat, which would have been used to ferry crew to and from the shore.

However, the name and origin of the Renaissance sailing ship are not yet known. Scientists have called it ‘Okänt Skepp’, Swedish for ‘unknown ship’.

Maritime archaeologist Dr Rodrigo Pacheco-Ruiz, who has spent more than a decade exploring and mapping sea beds, said the boat dates back to the days of Christopher Columbus and Leonardo Da Vinci.

The underwater expert revealed the vessel is older than previous historic findings, including the warship Mars, which was blown to pieces in the Firs Battle of Öland in 1564, and Henry the VIII’s Mary Rose, built in 1510.

Dr Pacheco-Ruiz today said: ‘This ship is contemporary to the times of Christopher Columbus and Leonardo Da Vinci.

‘But it demonstrates a remarkable level of preservation after 500 years at the bottom of the sea, thanks to the cold, brackish waters of the Baltic. It’s almost like it sank yesterday – masts in place and hull intact.

‘Still on the main deck is an incredibly rare find – the tender boat, used to ferry crew to and from the ship, leaning against the main mast. It’s a truly astonishing sight.’

Pictures and video taken during the inspection of the vessel reveal the incredible remains in full details.

Unlike the Mars warship, which had its remains scattered after being blown to pieces, this unnamed, newly discovered vessel has its hull almost completely intact.

Underwater imagery also shows other rare discoveries, including a wooden capstan, used to reel in rope for the mast, and bilge pump.

Pacheco-Ruiz added: ‘It’s in international waters. It’s literally in the middle of the Baltic. The deepest the sea bed dropped to was 140 metres.

‘We know it’s the oldest shipwreck in the Baltic. There’s no other ship in the world of this period like this. We have older ships but they are only timbers or metal – we never have a ship like this with masts and anchors.

‘The ships that will be moving around will be smaller to those used by Columbus, they are smaller vessels that can do a little bit of everything – moving goods, people and also a bit of war. It would be like the prototype for later ships like the Mars or Mary Rose.

‘We have named it the okänt skepp, which is unknown ship, and the reason we did this is because at that time did not have names. This is so early that that tradition is not there – even if it was a name it won’t be a name that would be unique for it.’ 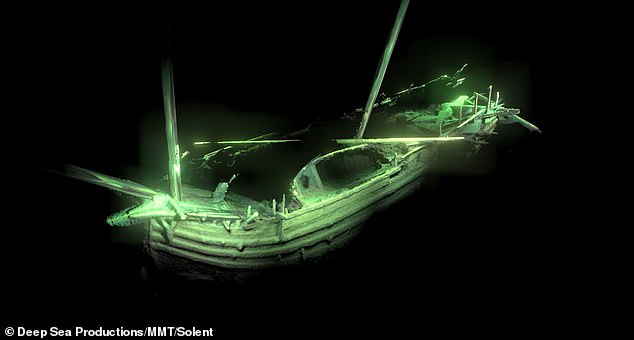 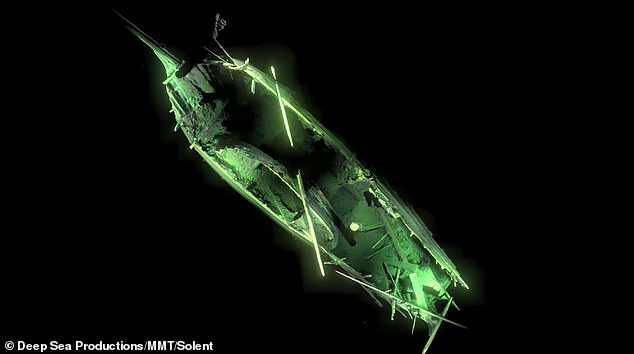 Aerial view: Another photogrammetric model of the ship looking from the top of the sea

Dr Pacheco-Ruiz believed damage to the ship’s stern was probably caused by metals corroding in the saltwater leading to timbers coming apart – rather than an attack on the ship.

On who were the crew and why the ship went down, he said: ‘That’s the hardest part I think and that’s something we will not be know until we have more samples.

‘It doesn’t look like it went down in a very dramatic fashion – it could be abandonment or the crew became diseased, they could have caught something and died and the it it could be just floating. What we want to do this is come back and sample some of these elements of the shipwreck like timbers to precisely date the shipwreck and then we can start chasing that a bit better.’

He added: ‘The bits we know about these ships are historically speaking, drawings at the time and carvings. We have some wooden models that were used to build the ships. But here we have the entire ship.

‘It’s game changing because of the period it pertains to. I think it’s important to flesh out the collaboration between universities and the commercial sector – in the past it has always been done like treasure hunting crews or people who don’t understand cultural heritage.

‘We found it when we were doing the surveys for Nord Stream 2 pipeline. The technology and the equipment that you need to get to these places – it’s £50,000 a day for the ship vessel hire alone.’

A spokesman for the University of Southampton today said: ‘This unknown ship is probably the best preserved shipwreck of its period to be discovered.

‘It is an intact and astonishingly preserved shipwreck. It is rare to find a ship in such an astonishing condition.’

WHAT IS SONAR AND HOW DOES IT WORK?

Military equipment and animals that use sonar are simply making use of an echo.