Remains of a Bronze Age chieftain are unearthed in Gloucestershire

An early Bronze Age chieftain, valuable rugs, a horde of goods and a sitting shaman that may have been a human sacrifice were found inside a 4,000-year-old burial site.

Archaeologists made the ‘unprecedented discovery’ during a dig in Lechlade, Gloucestershire on the site of a future skatepark and memorial hall.

This is the first example in the British Isles of human sacrifice being practiced to provide leaders with a spiritual guide to ease their way through the afterlife.

The chieftain inside the ‘impressive burial mound’ was  surrounded by goods – including a copper dagger, an archer’s wrist guard and four cow hide rugs.

Sitting opposite him – about 6ft away – was another man lying crouching on his side in a seated position with no goods. Archeologists believe this was a holy man. 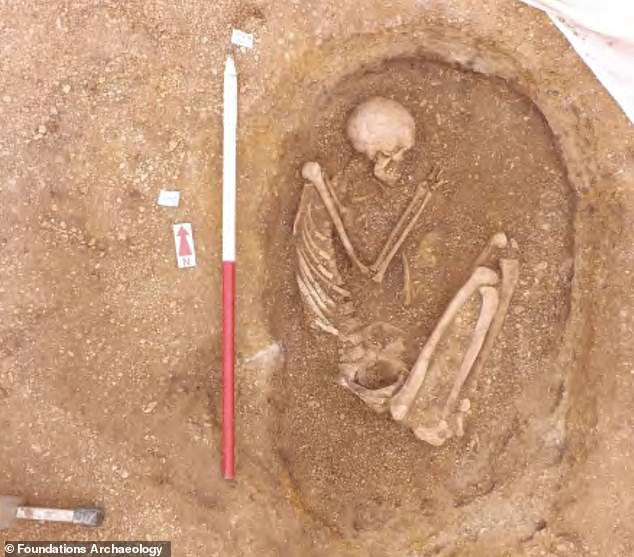 An early Bronze Age chieftain, valuable rugs, a horde of goods and a sitting shaman that may have been a human sacrifice (pictured) were found inside a 4,000-year-old burial site 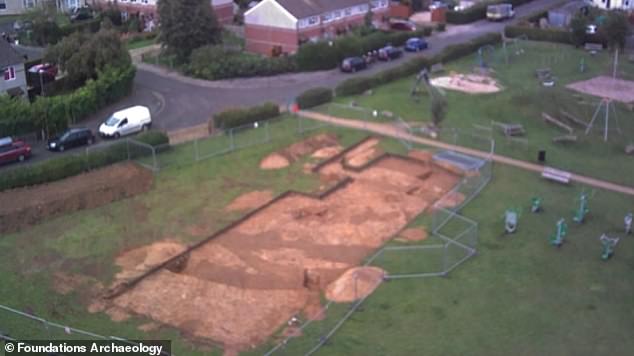 The site in Lechlade, Gloucestershire is now home to a skatepark and memorial hall after three years of excavations

The dig was carried out by Foundations Archaeology ahead of the development of the new skatepark and memorial hall – both of which are now open.

The researchers believe the two men were part of the ‘Beaker culture’ – named after a type of cup used during this time and a dominant culture in early Bronze Age Britain.

The pair in the burial mound were likely descended from a group that arrived in Britain a couple of hundred years earlier from the Pontic-Caspian steppe.

Andy Hood of Foundations Archaeology said cows were sometimes sacrificed to accompany the chieftain in the afterlife while mourners feasted on their flesh.

He said it was unusual to discovered so many cow hides in a single grave, which suggests the chieftain was of great importance to his community.

The chieftain buried in this grave was the first to use metal in Britain and had goods from hundreds of miles away, according to Mr Hood. 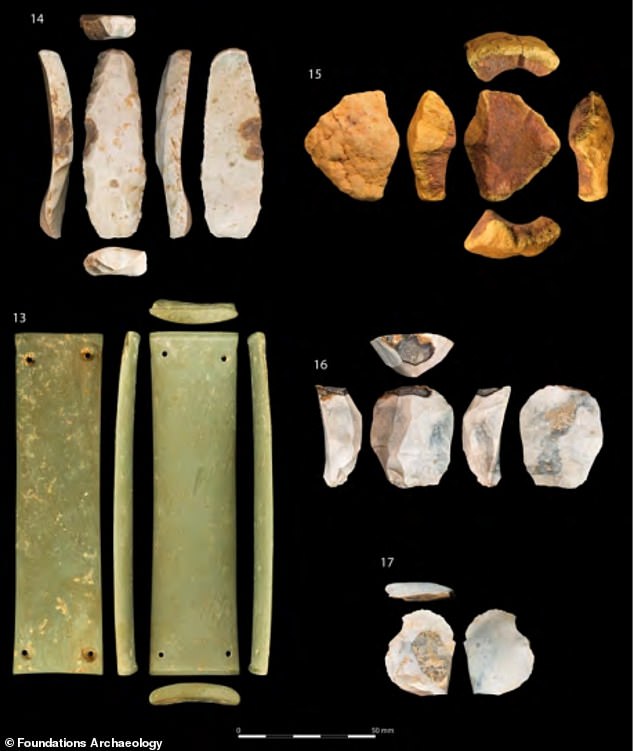 The chieftain inside the ‘impressive burial mound’ was surrounded by goods – including a copper dagger, an archer’s wrist guard and four cow hide rugs

This included a copper dagger, a whalebone pommel, an archer’s wrist guard of polished green stone from the Lake District and a fire-starting kit.

They couldn’t work out how old the leader was, but say the shaman buried sitting opposite him was in his 50s or 60s.

It’s the seated position that led the experts to believe he was a sacrifice as shamans have been found buried alongside leaders in similar positions in Europe and Asia.

He was found upright with his legs dangling over a pit and facing the chieftain.

‘In anthropological terms, the idea of having a shaman or holy man would fit with this context because this was a ceremonial and religious area for a significant part of prehistory,’ Mr Hood told The Times.

The beaker community, who made the burial mound, appropriated an existing sacred site – it was built near a Stone Age ‘cursus’ monument from 3000BC.

‘In British prehistory there is emerging evidence for periods of human sacrifices, which is a distinct possibility,’ said Mr Hood.

The shaman would likely have been buried at or straight after the chieftain, according to a report by the Independent, which first carried this story.

His seated position was part of a long tradition of holy men being buried in that way – dating back to about 9500BC in Russia and Ukraine.

People still used the site where the pair were buried for burials long after its construction – in fact there was even an Anglo-Saxon burial ground on the site suggesting it held sacred connotations for thousands of years.

The chieftain and his shaman were at the peak of their power 300 years after the Beaker people first appeared in Britain (about 2500 BC).

They were the most dominant group of people in the country but appeared to ‘buy into’ Britain’s pre-beaker heritage by using ancient burial sites.

This included a copper dagger, a whalebone pommel, an archer’s wrist guard of polished green stone from the Lake District and a fire-starting kit 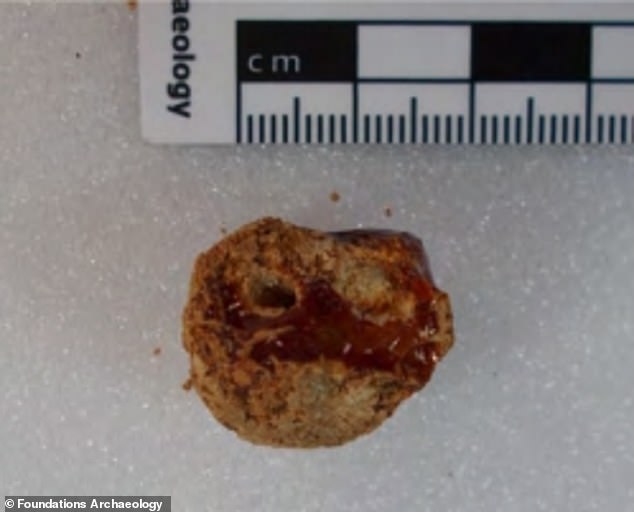 They couldn’t work out how old the leader was, but say the shaman buried sitting opposite him was in his 50s or 60s

The pair were laid to rest in one of the spiritually and ritually important places in southern Britain – a site where four rivers come together.

There were three pre-Beaker ceremonial monuments on the site and a substantial ceremonial enclosure that was up to half a mile long.

This trend of using the site for burials continued for thousands of years. By the time the chieftain was buried it had already been in use over 1,000 years.

Some 12,00 years after his burial four late Bronze age people had cremated remains placed on the site and 700 years after that three Iron age people used it as their final resting place, according to the Independent. 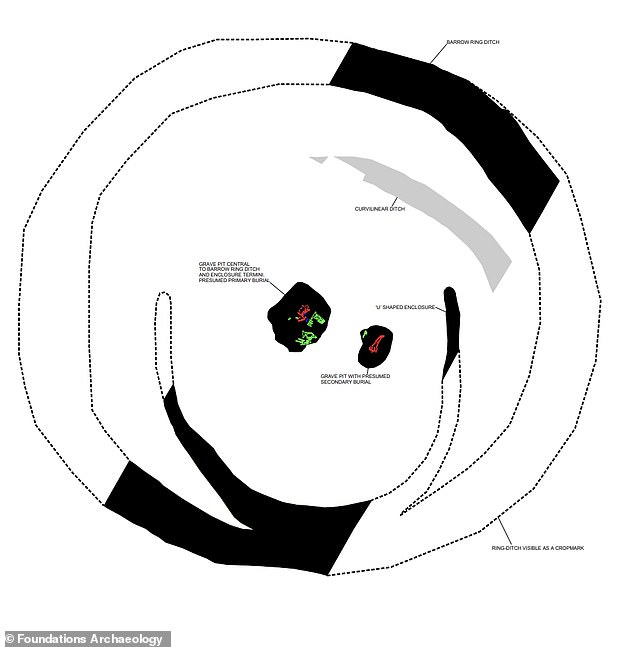 The pair were buried on the site of an existing stone age sacred site. There were ceremonies and burials on this site for a total of 5,000 years – long after the chieftain was buried

Angle-Saxon groups – 900 years after the Iron Age people – were also buried there.

The Lechlade site – where a skatepark and memorial hall are being built – was one of the longest-lasting religious sites in Britain lasting over 5,000 years.

‘Our investigation has been a rare opportunity to shed new light on a crucial period of British prehistory,’ Hood told the Independent.

‘What’s more, it has allowed us to understand the extraordinary time depth of this ancient funerary monument and its use by so many different cultures from the Neolithic all the way through to the Iron Age.’

There is nothing to see on the surface of the ancient site anymore due to millennia of soil erosion and centuries of ploughing – but it was the fact there was no obvious sign of a burial mound that likely protected the site from treasure hunters.

Between 4,700 and 4,400 years ago, a new bell-shaped pottery style spread across western and central Europe, and this period is called the ‘Bell Beaker’.

The period received its name due to the pottery’s distinctive bell-shaped beakers, decorated in horizontal zones by finely toothed stamps.

But the sheer variety of beaker artifacts across Europe has made the pottery difficult to define as coming from one distinctive culture.

A new study published in Nature suggests that the Beaker culture spread through Europe via two different mechanisms – the spread of ideas and migration. 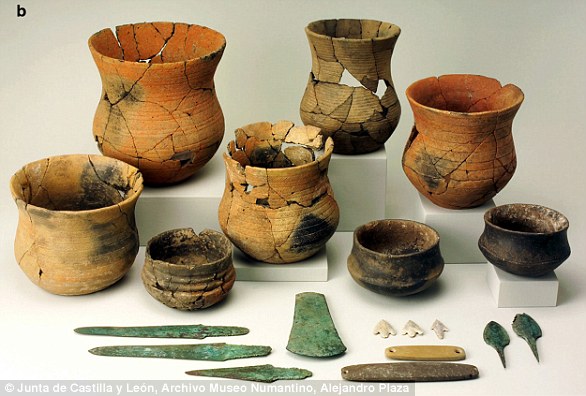