The exoplanet with a tail: Researchers discover giant world with helium gas trailing behind it as radiation strips its atmosphere

Comets aren’t the only cosmic objects that can have a tail.

According a new study, a planet outside of our solar system appears to have lost its atmosphere and now boasts a comet-like tail of helium particles propelled by radiation from its star.

Researchers say the findings could help to explain how gaseous planets lose their atmospheres over time to become rocky worlds similar to Venus or Earth. 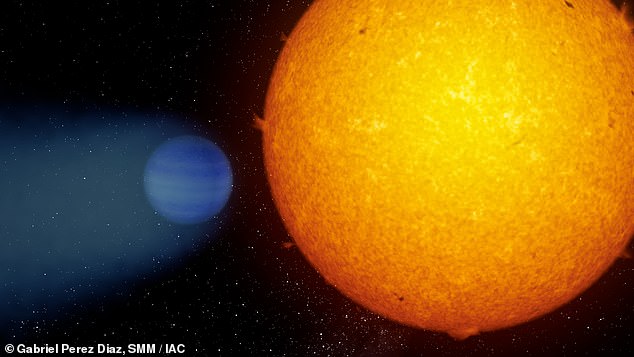 According a new study, a planet outside of our solar system appears to have lost its atmosphere and now boasts a comet-like tail of helium particles propelled by radiation from its star. Artist’s impression

In the new study, researchers using the CARMENES instrument on the 3.5-meter telescope of the Calar Alto Observatory in Almería, Spain identified a total of five exoplanets that appear to have a helium ‘envelope.’

One planet, however, known as WASP-69b, appears to be leaving behind much of this gas in its wake.

Researchers observed the planet during a transit, when it passes in front of its star, and say part of the light appear to be absorbed by an unusual feature.

‘We observed a stronger and longer lasting dimming of the starlight in a region of the spectrum where helium gas absorbs light,’ says Lisa Nortmann, a researcher at the IAC and lead author of the article published today in the journal Science.

‘The longer duration of this absorption allows us to infer the presence of a tail.’

According to the team, the helium is trailing behind WASP-69b as a result of ultraviolet radiation from the host star.

Three of the other planets did have helium exospheres, though the features were not as extensive as scientists expected.

And one planet, a hot Jupiter called HD 189733b, appears to have a more compact helium envelop that lacks a tail.

Further analysis using data from ESA’s Multi-Mirror X-ray Mission (XMM-Newton) suggest helium can be detected in planets that receive the most X-ray and ultraviolet radiation from their stars.

‘This is a first big step towards finding out how exoplanet atmospheres evolve over time and what the distribution of masses and radii of the observed population of super-earth and mini-Neptune planets could result from,’ says Enric Pallé, IAC researcher and co-author of the publication.

HOW DO SCIENTISTS STUDY THE ATMOSPHERE OF EXOPLANETS?

To understand these new world’s, and what they are made of, scientists need to be able to detect what their atmospheres consist of.

They often do this by using a telescope similar to Nasa’s Hubble Telescope.

These enormous satellites scan the sky and lock on to exoplanets that Nasa think may be of interest.

Here, the sensors on board perform different forms of analysis.

One of the most important and useful is called absorption spectroscopy.

These lines correspond to a very specific molecule, which indicates it’s presence on the planet.

The key is that what is missing, provides the clues to find out what is present.

It is vitally important that this is done by space telescopes, as the atmosphere of Earth would then interfere.

This is often used to look for helium, sodium and even oxygen in alien atmospheres.

The new findings could shed light on the evolution of exoplanet atmospheres, and reveal how gaseous planets similar to Jupiter or Neptune turn into rockey planets over time.

‘In the past, studies of atmospheric escape, like the one we have seen in WASP-69b, were based on space-borne observations of hydrogen in the far ultraviolet, a spectral region of very limited access and strongly affected by interstellar absorption,’ say Michael Salz, a researcher at the University of Hamburg.

‘Our results show that helium is a very promising new tracer to study atmospheric escape in exoplanets.’