Follow
Home » Science » Revealed: First look at extracts from research of He Jiankui

Revealed: First look at extracts from research of He Jiankui

Revealed: Never-seen-before extracts from ‘outrageous’ research of disgraced Chinese scientist He Jiankui who controversially gene-edited embryos to be resistant to HIV

Extracts from the controversial scientific paper penned by disgraced Chinese biophysicist He Jiankui have been revealed for the first time.

A full-length piece of research has never before been published or verified, but excerpts have now been obtained and published by MIT Technology Review.

The abstract of the alleged paper, which is littered with oversights, errors and ethical neglect, compounds concerns over the project.

Experts who reviewed the extracts have called it ‘delusional’, ‘outrageous’ and ‘preposterous’.

Scroll down or video 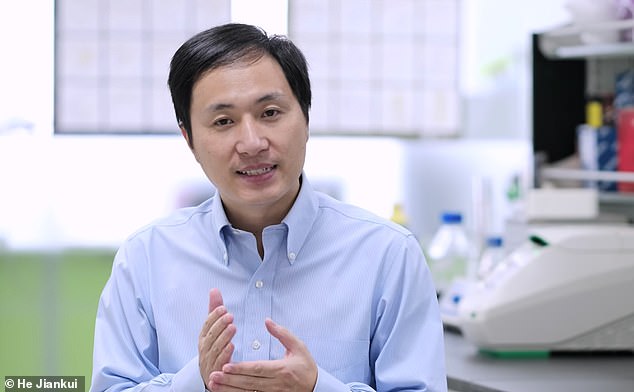 Extracts from the controversial scientific paper penned by disgraced Chinese biophysicist He Jiankui have been revealed for the first time.

HOW DID DR HE DESCRIBE THE WORK?

‘The gene editing occurred during IVF, or lab dish fertilisation.

‘First, sperm was ‘washed’ to separate it from semen, the fluid where HIV can lurk.

‘A single sperm was placed into a single egg to create an embryo.

‘Then the gene editing tool was added.

‘When the embryos were three to five days old, a few cells were removed and checked for editing.

‘Couples could choose whether to use edited or unedited embryos for pregnancy attempts.

‘In all, 16 of 22 embryos were edited, and 11 embryos were used in six implant attempts before the twin pregnancy was achieved.’

He, along with nine listed co-authors, proclaims his work as a ‘success’ and goes as far as to say it ‘will bring new hope to millions of families seeking healthy babies free from inherited or acquired life-threatening diseases.’

Fyodor Urnov, a genome-editing scientist at the University of California, Berkeley, told MIT Technology Review that this was a ‘deliberate falsehood’.

Professor Urnov added: ‘The statement that embryo editing will help millions is equal parts delusional and outrageous, and is akin to saying that the 1969 moonwalk ‘brings hopes to millions of human beings seeking to live on the moon.”

Dr He stunned the world when he announced the use of gene-editing technology CRISPR-Cas9 to alter the embryonic genes of twin girls, nicknamed ‘Lulu’ and ‘Nana’.

The disgraced researcher’s justification for the experiment was to confer HIV immunity to the embryos in later life.

Many reports claimed this was due to the father being HIV-positive. This is false, as the father’s HIV status was neutralised using a long-established technique called sperm washing.

Instead of the traditional route of publishing research in a respected journal where it can be scrutinised and dissected, Dr He announced his heinous work to the world via YouTube.

It caused international outrage in November 2018 when academics and members of the public became aware of the extent of the ethical violations.

The gene Dr He intended to edit is called CCR5, and it is involved in regulating the body’s immune system.

Although naturally-occurring mutations in CCR5 have been associated with higher levels of resistance to infection specifically in European populations, these do not block all strains of HIV.

He sought to disable CCR5, to stop it forming a protein doorway that allows HIV, the virus that causes AIDS, to enter a cell.

This was viewed as the sole goal for the research, but Professor Urnov says ‘there is zero evidence in the manuscript supporting the essential expectation that the new forms of CCR5 would be HIV-protective’. 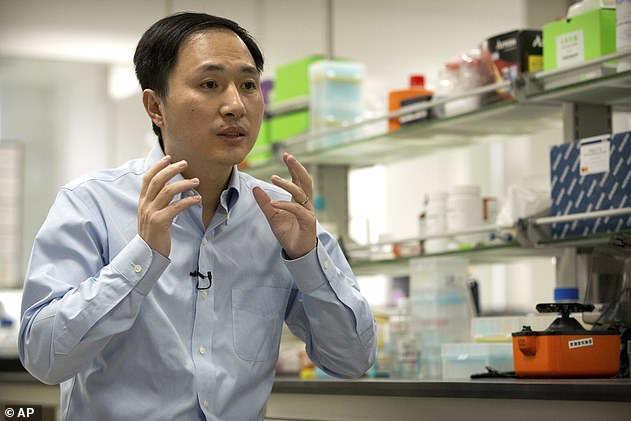 The gene Dr He intended to edit is called CCR5, and it is involved in regulating the body’s immune system. He sought to disable CCR5, to stop it forming a protein doorway that allows HIV, the virus that causes AIDS, to enter a cell

The legitimacy, not to mention the safety implications, of this research led to universal condemnation. The conspicuous absence of a peer-reviewed paper exasperated these problems.

In what appears to be a non-peer-reviewed proof seen for the first time, researchers pick apart the reasoning, methodology and morality of the procedure.

One simple and major cause for concern unearthed by the extract is a stunning lack of collaborators on the project. An undertaking of this magnitude would be expected to have dozens of collaborators.

Only ten authors are named, with no doctors or obstetricians listed, which indicates the medical professionals helping to conduct the IVF and birthing were unaware of the ethical violations that had taken place.

One of the authors listed is one Muchael Deem, of Rice University in Texas.

Dr Deem was He’s former adviser, physics and bioengineering professor and Rice University investigated the role he played in the experiment.

In the paper, He seeks desperately for validation of his barbaric experiment, which unnecessarily endangers the lives of two twin baby girls in order to confer HIV protection.

To this end, He states that gene-editing could be used to help cure and prevent future HIV infection and improve upon existing medicine and treatments.

Rita Vassena, scientific director, Eugin Group, dismisses this notion as ‘an attempt to find a defensible reason to use CRISPR/Cas9 technology in human embryos at all costs’.

Dr Vassena adds: ‘The idea that editing-derived embryos may one day be able to ‘control the HIV epidemic,’ as the authors claim, is preposterous.

‘Public health initiatives, education, and widespread access to antiviral drugs have been shown to control the HIV epidemic.’

WHAT ARE SOME OF THE DOUBTS SURROUNDING DR HE’S CLAIMS?

Several scientists reviewed materials that Dr He provided to the AP and said tests so far are insufficient to say the editing worked or to rule out harm.

They also noted evidence that the editing was incomplete and that at least one twin appears to be a patchwork of cells with various changes.

‘It’s almost like not editing at all’ if only some of certain cells were altered, because HIV infection can still occur, famed Harvard University geneticist Professor George Church said.

Church and Dr Kiran Musunuru, a University of Pennsylvania gene editing expert, questioned the decision to allow one of the embryos to be used in a pregnancy attempt, because the Chinese researchers said they knew in advance that both copies of the intended gene had not been altered.

‘In that child, there really was almost nothing to be gained in terms of protection against HIV and yet you’re exposing that child to all the unknown safety risks,’ Dr Musunuru said.

The use of that embryo suggests that the researchers’ ‘main emphasis was on testing editing rather than avoiding this disease,’ Church said.

Even if editing worked perfectly, people without normal CCR5 genes face higher risks of getting certain other viruses, such as West Nile, and of dying from the flu.

Since there are many ways to prevent HIV infection and it’s very treatable if it occurs, those other medical risks are a concern, Dr Musunuru said.

There also are questions about the way Dr He said he proceeded.

He gave official notice of his work long after he said he started it – on November 8, on a Chinese registry of clinical trials.

It’s unclear whether participants fully understood the purpose and potential risks and benefits.

The hospital linked to the controversial project denied approving the procedure and accused Dr He of forgery.

A singular paragraph is dedicated to one of the largest issues facing the use of gene-editing on human embryos, unintentional mutations introduced via CRISPR, known as unwanted edits, called ‘off-target’ mutations.

This, it seems, may be one of the few indubitable statements in his paper.

But then he continues: ‘After thoroughly assessing all treated embryos for off-targets and large deletions by whole genome single cell sequencing, one edited embryo did not show any off-target mutations.

‘The other embryo showed one possible off target…we concluded that this off-target genomic insertion might not impact any biological function.’

Professor Urnov said: ‘An egregious misrepresentation of the actual data that can, again, only be described as a blatant falsehood.

‘It is technically impossible to determine whether an edited embryo ‘did not show any off-target mutations’ without destroying that embryo by inspecting every one of its cells.

‘This is a key problem for the entirety of the embryo-editing field, one that the authors sweep under the rug here.’

Various other issues are also apparent, including lying about when the twins were born, potentially misleading the doctors involved and conducting a token gesture ethics review after the children were born. 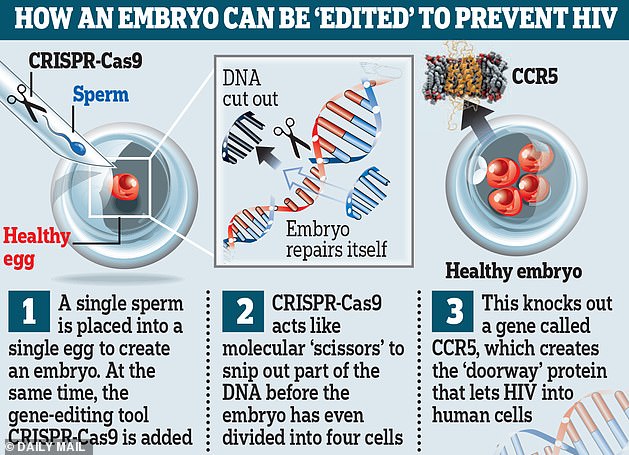 This graphic reveals how, theoretically, an embryo could be ‘edited’ using the powerful tool Crispr-Cas9 to defend humans against HIV infection

CRISPR-Cas9 is a tool for making precise edits in DNA, discovered in bacteria.

at, extrac, first, look, revealed
You may also like: