Robot that can ‘imagine itself’ is built by scientists

Is this the dawn of Skynet-style machines? Robot that can ‘imagine itself’ and became self-aware is built by scientists

A robot able to ‘imagine’ itself has been created in a step towards the self-aware robots envisioned in the Terminator movies.

Skynet and other sci-fi machines are able to learn and decipher from scratch but real-world robots have yet to master this art.

Now, scientists have managed to create a machine that can learn without prior programming via ‘deep learning’.

After an initial 24 hours of behaving like a ‘babbling infant’ it was able to grasp objects from specific locations and drop them with 100 per cent accuracy thanks to 35 hours of training.

Even when relying entirely on its internal self model – the machine’s ‘imagination’ – the robot was able to complete the pick-and-place task with a 44 per cent success rate. 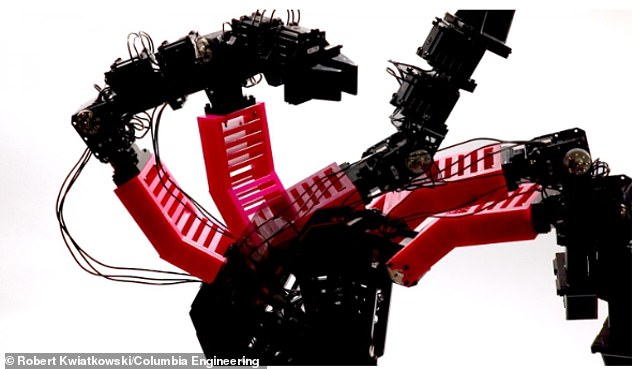 Intelligent? After 35 hours of training, the ‘self model’ helped the robot grasp objects from specific locations and drop them in a receptacle with 100 per cent accuracy

The device consists of a jointed artificial arm and grasping ‘hand’ similar to those used in numerous production plants.

What makes this robot different to thousands of others is that it knows that is what it is.

US scientists gave it the ability to ‘imagine itself’ using a process of self-simulation.

Professor Hod Lipson, director of the Creative Machines Lab at the University of Columbia, New York – where the research was conducted, said: ‘If we want robots to become independent, to adapt quickly to scenarios unforeseen by their creators, then it’s essential that they learn to simulate themselves.

‘While our robot’s ability to imagine itself is still crude compared to humans, we believe that this ability is on the path to machine self-awareness.’

At the start of the study, the robot had no idea what shape it was, whether a spider, a snake or an arm.

To begin with, it behaved like a ‘babbling infant’, moving randomly while attempting various tasks.

Within about a day of intensive ‘deep learning’, the robot built up an internal picture of its structure and abilities.

PhD student Robert Kwiatkowski, another member of the team, said: ‘That’s like trying to pick up a glass of water with your eyes closed, a process difficult even for humans.’ 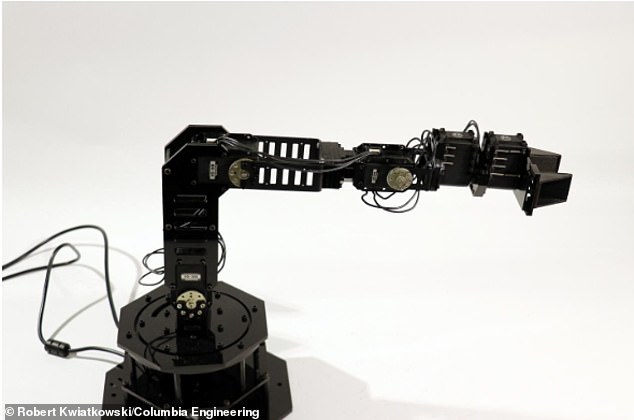 Risk factor: Eerily, the scientists say they are aware of the potential dangers involved in giving robots the gift of self-awareness

Other tasks included writing text on a board using a marker.

To test whether the robot could detect damage to itself, the scientists replaced part of its body with a deformed version. The machine was able to recognise the change and work around it, with little loss of performance.

Self-aware robots may shed new light on the age-old mystery of consciousness, said Pressor Lipson. He added: ‘Philosophers, psychologists, and cognitive scientists have been pondering the nature of self-awareness for millennia, but have made relatively little progress.

‘We still cloak our lack of understanding with subjective terms like ‘canvas of reality’, but robots now force us to translate these vague notions into concrete algorithms and mechanisms.’

Self-aware robots and computers running amok or threatening the human race have been a rich source of material for sci-fi novels and films.

The scientists say they are aware of the potential dangers involved in giving robots the gift of self-awareness.

Writing in the journal Science Robotics, they warn: ‘Self-awareness will lead to more resilient and adaptive systems, but also implies some loss of control. It’s a powerful technology, but it should be handled with care.’

HOW WILL ROBOTS CHANGE THE WORKPLACE BY 2022?

The World Economic Forum has unveiled its latest predictions for the future of jobs.

The non-profit expects robots, AI and other forms of automation to drastically change the workplace within the next four years.

Jobs predicted to be displaced: 75 million

Jobs predicted to be created: 133 million