Robot boat sails into history to become the first unmanned vessel to cross the Atlantic as it completes a 1,800-mile trip from Canada to Ireland

A robotic craft has made history as the first unmanned sailboat to cross the Atlantic after a 1,800-mile (3,000 km) journey from Newfoundland in Canada to Ireland.

The boat’s two-and-a-half-month journey saw it cross the churning North Atlantic as part of the Microtransat Challenge – a transatlantic race for autonomous boats.

The SB Met, built by Norwegian company Offshore Sensing AS, is the first vessel to complete the challenge after more than 20 attempts by various teams.

It’s a milestone that shows the technology for unmanned boats is robust enough to carry out extended missions that can dramatically cut costs for ocean research, border security, and surveillance in rough or remote waters.

They’re part of wider efforts to develop autonomous marine vessels such as robotic ferries and cargo ships that could be operating by the end of the decade. 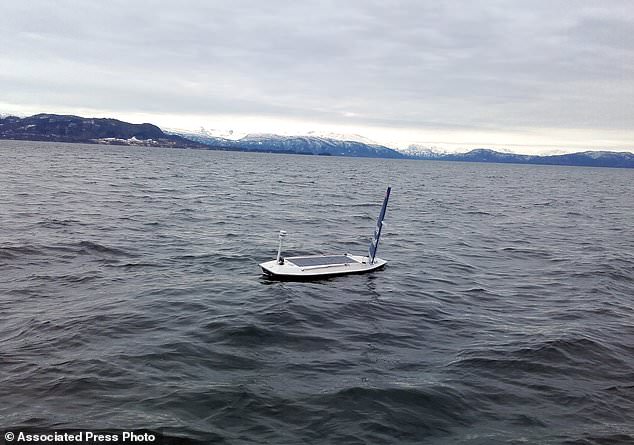 The SB Met, built by Norwegian company Offshore Sensing AS, is the first unmanned boat to cross the Atlantic. Pictured is a demonstration vessel in the waters of Bjornafjorden, near Bergen, Norway

‘We’ve proved that it’s possible to do,’ said David Peddie, CEO of Offshore Sensing, which created the oceangoing drones, known as Sailbuoys.

‘The North Atlantic is one of the toughest areas to cross’ and completing the challenge ‘really proves that it’s a long endurance vehicle for pretty much any condition the sea can throw at you,’ he said.

Under the Microtransat’s rules, boats up to 7.9 feet (2.4 meters) long can sail between Europe and the Caribbean or North America and Ireland.

They must regularly transmit location data.

The Sailbuoy competed in the ‘unmanned’ class, which allows operators to change its course along the way.

There’s a separate ‘autonomous’ class that prohibits any such communication.

While self-driving cars have to contend with pedestrians and other traffic, autonomous boats face storms that bring fierce gales and high waves as well as numerous seaborne hazards. 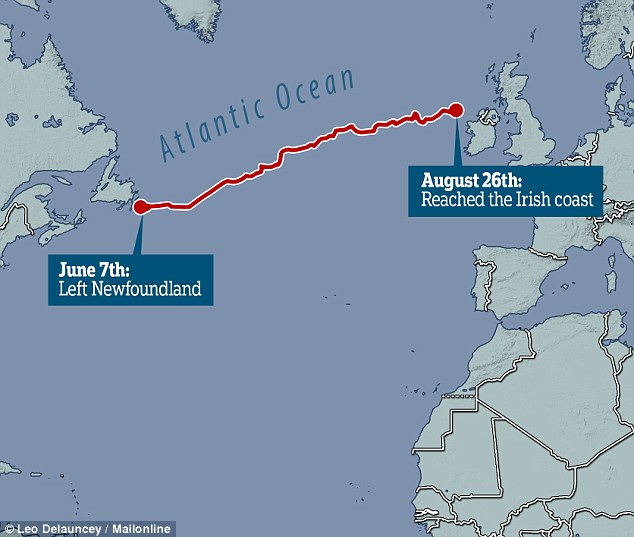 The craft is the first unmanned sailboat to cross the Atlantic, following a 1,800-mile (3,000 km) journey from Newfoundland in Canada to Ireland

More than 20 previous attempts by various teams to complete the Microtransat since it began in 2010 have ended in failure, with robot boats caught in fishing nets, retrieved by ships, or lost, according to the race website.

Peddie said his biggest fear was that a passing boat would pick up the two-meter, 60 kilogram (130 pound) vessel as it neared the finish.

The company is in a niche field with few other players.

Sailbuoys are a type of autonomous vessel built by Norwegian company Offshore Sensing AS.

Offshore Sensing has built 14 Sailbuoys, which have a surfboard-shaped deck covered in solar panels that power the onboard technology.

They also feature a rigid trapezoidal sail mounted near the bow that propels the vessel.

They work as low-maintenance research vessels.

U.S. startup Saildrone is building a fleet of seven-meter ‘unmanned surface vehicles’ that can spend up to 12 months gathering ocean data.

Liquid Robotics , owned by Boeing, makes the Wave Glider, a research platform that uses wave rather than wind power for propulsion.

Bigger unmanned ships are coming, too, and the International Maritime Organisation is reviewing the safety, security and environmental implications.

Offshore Sensing has built 14 Sailbuoys, which have a surfboard-shaped deck covered in solar panels that power the onboard technology and a rigid trapezoidal sail mounted near the bow that propels the vessel. 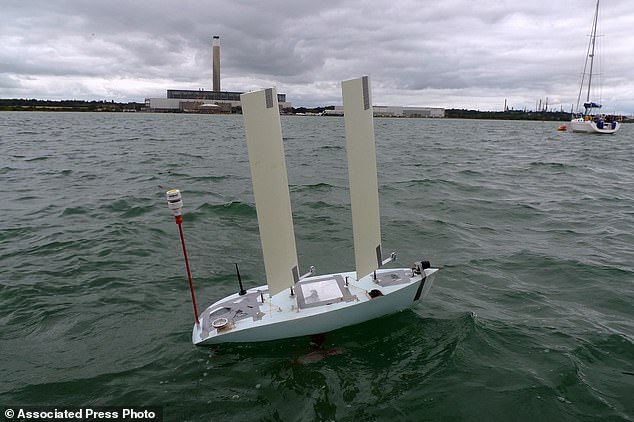 This image shows a robotic boat operated by a team from China’s Shanghai Jiaotong University at the World Robot Sailing Championship in Southampton. The contest and the Microtransat Challenge are aimed at stimulating development of autonomous sailboats

In company videos, it looks like a toy tossed about by waves and passing ships, making its achievement all the more unlikely.

Mr Peddie says robotic sailboats offer important advantages. Unlike drifting buoys, they can loiter in one place, and they’re nimbler and cheaper than research vessels.

‘These vehicles can do stuff which you cannot do with a traditional vehicle, especially in dangerous areas,’ such as a hurricane’s path, he said.

Sailbuoys can be fitted with sensors to measure waves, ocean salinity and oxygen levels; echo sounders to look for fish eggs and larvae; or transmitters to communicate with undersea equipment.

‘The great advantage is that you can collect an awful lot of data for very low cost,’ Peddie said.

boat, finis, history, robot, sails
You may also like: