Palaeolithic rock art which dates back around 15,000 years has been uncovered in a Spanish cave.

The discovery in Catalonia includes figurative representations of animals including deer, horses and oxen, as well as abstract symbols and shapes.

In total, more than 100 carvings were made in the soft, sandy silt of the cave. 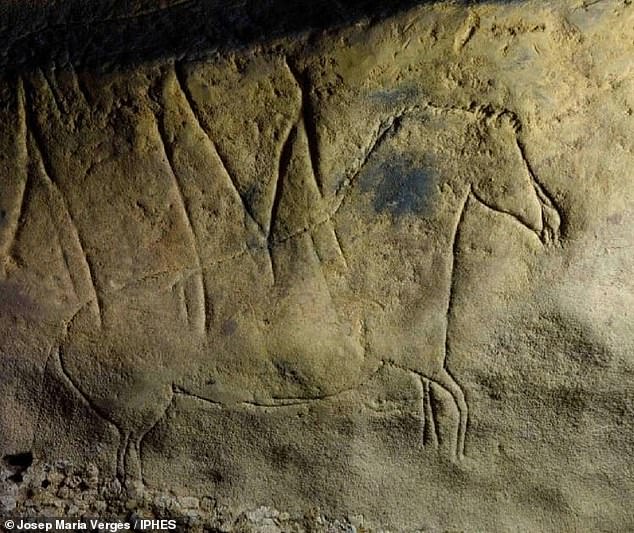 The discovery in Catalonia includes figurative representations of animals—such as deer, horses and oxen as well as abstract symbols and shapes

The region of Cantabria, in the north of the country, is the location on Earth wit the highest concentration of rock art on Earth.

It is also home to Altamira, a UNESCO World Heritage Site.

It features charcoal drawings and colour artwork of animals that lived in the region 36,000 years ago.

The haul was found by archaeologists from Rovira i Virgili University and the Catalan Institute of Human Paleoecology and Social Evolution (IPHES).

They identified the carvings in a hard-to-reach cave called Cova de la Font Major, near the village of L’Espluga de Francolí.

The team stumbled across the carvings on October 30, 2019 after resuming investigations following a bout of flooding.

They decided not to make the find public until it was secured, to ensure it was not destroyed.

Archaeologists believe the cave may have been used as a shrine or a religious sanctuary by the ancient inhabitants of Iberia.

Walls of the cave are soft and easily brushed away, with scientists saying the lightest touch could damage these preserved examples of ancient art.

Due to the fragility of the carvings it is unlikely the cave will ever be open to the public, as some of the art has already disappeared.

As a result, a team from IPHES and the Ministry of Culture, Generalitat de Catalunya—the regional government of Catalonia — are launching a plan to 3D image the cave.

This scanning technology will archive the engravings forever to ensure they live on, even if their physical marks are swept away.

It will also allow experts to study the cave in a non-invasive manner.