Roman jewellery found on the body of a 2,000 year old barbarian woman

Remains of a 2,000-year-old barbarian woman are found buried in North Caucasus with jewellery that was created in the Roman Empire – including glass beads and rare gems

The remains of an ancient ‘barbarian woman’ thought to be almost 2,000 years old have been found bedecked in fine jewellery from the Roman Empire.

She was found in the North Caucasus and is thought to have been of a ‘high-status’ within her community – possibly the wife, sister or mother of a prominent warrior or chieftain.

Her remains, found in a tomb in the mountainous Russian republic of Kabardino-Balkaria, have surprised archaeologists, in part due to the fact the jewellery was of Roman origin. 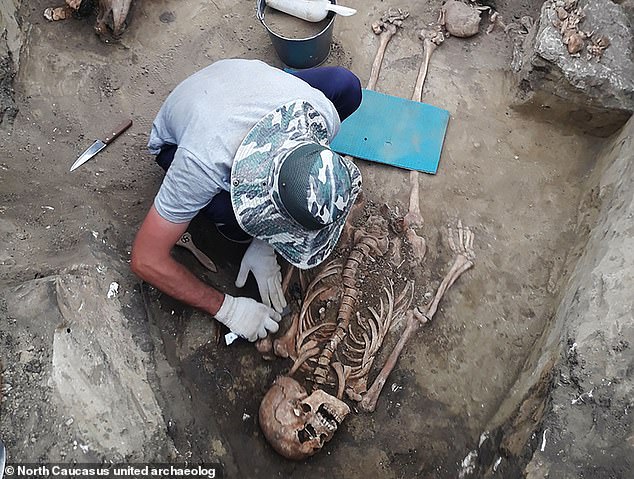 The ancient woman is probably from the Alans warrior people who made incursions into the Caucasus in the first and second centuries AD. Archaeologists say she was buried alongside a warrior and two other men

‘She had two rings on her fingers manufactured with the use of quite a complex technology,’ said archaeologist Anna Kadieva, head of an expedition at Zayukovo-2 burial site.

‘Each of them is cast from transparent white glass with golden fibres from the same material, with a dark glass installation in the middle.’

Ms Kadieva said the fact the jewellery was Roman-made is ‘beyond any doubt’.

She added: ‘It is quite expensive for the time, and priceless for the barbarian world because there was no glass production in the North Caucasus back then.’

The beads on her shoes were made of glass but also contained carnelian, an orange coloured mineral that is part of the Quartz family. 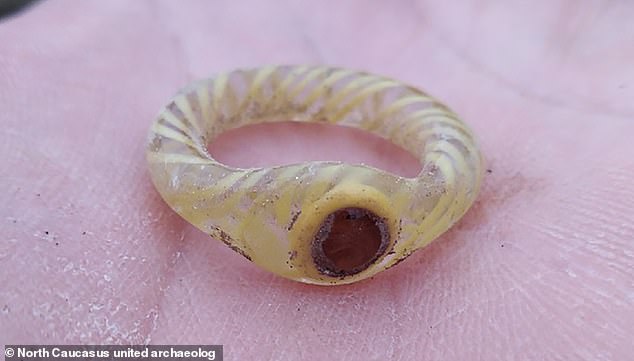 She had two rings on her fingers manufactured with the use of quite a complex technology. Each of them was cast from transparent white glass with golden fibres from the same material, with a dark glass installation in the middle, as seen in this image 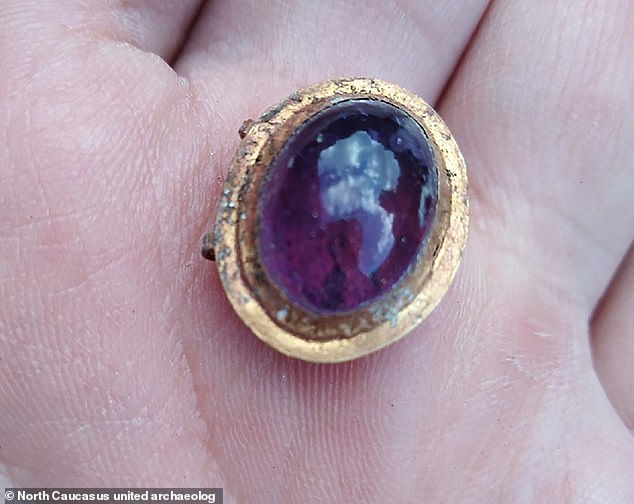 The woman was also discovered wearing a bright violet amethyst medallion as seen in this picture. The team say this would have been ‘priceless’ for the region as they had no glass blowing technology at the time

She was also discovered wearing a bright violet amethyst medallion.

‘This is a high class gem worthy of its gold casing,’ said the archaeologist from the State Historical Museum of Russia.

The woman is probably from the Alans warrior people who made incursions into the Caucasus in the first and second centuries AD, the team speculated. 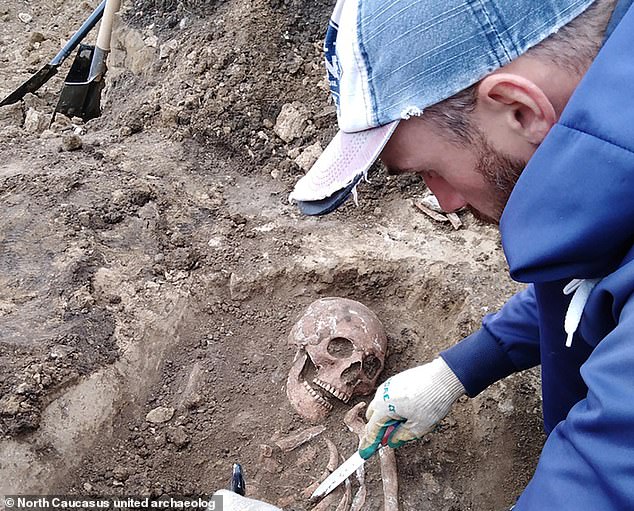 It is thought the woman could have been the wife of a renowned warrior or tribal chief. The team are examining her remains and others at the Zayukovo-2 burial site in the Russian republic of Kabardino-Balkaria 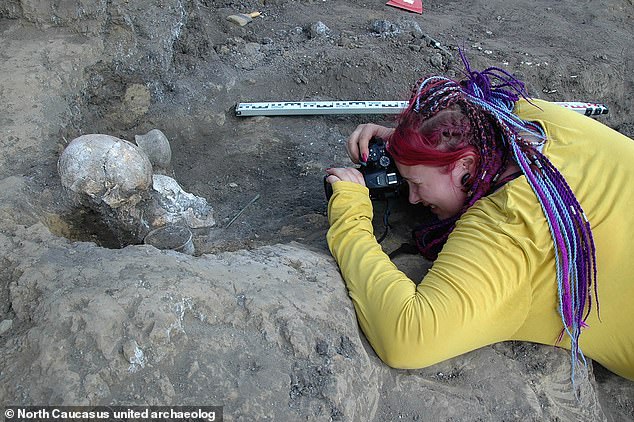 The team found that the woman had been buried with a warrior and two other males. They are not sure how they died but found they had at a similar time

‘We came to the conclusion that wealthy warriors from North Caucasus presented expensive jewellery to their loved ones,’ Ms Kadieva said.

‘The woman most likely was a close relative of the warriors – mother, wife, or sister – because the catacomb is a family burial.’

She was interred alongside a warrior and two other males.

‘It is not clear how they died, but given the integrity of the skeletons, the time between their deaths was short,’ she said.

Further studies are being made into the finds.

b, found, Jewellery, on, Roman, the
You may also like: