Time to invest in a bird bath? RSPB urges Britons to leave out fresh water in their gardens to help avians keep cool during the UK heatwave

A heatwave is currently sweltering the UK, with scorching temperatures expected to meet or exceed heat-health alert thresholds for at least the next three days.

Many Brits have struggled with the heat, and now the RSPB has warned that it’s not just humans suffering – it’s birds too.

The charity is urging Brits to consider leaving fresh water in their gardens to help birds keep cool amid the heatwave. 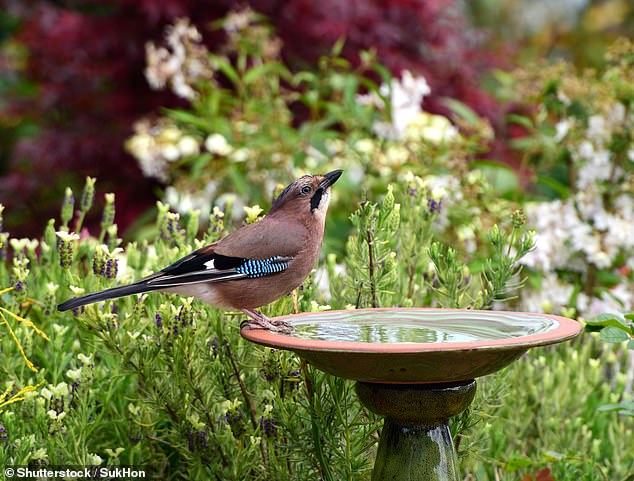 Top 10 most spotted songbirds in Britain

In a blog on its website, RSPB explained that during the summer months, many garden birds hide themselves away to keep themselves safe.

‘The first reason that birds are less visible in the summer is that they are growing a new set of feathers, which can be very draining and make it harder for them to fly,’ it said.

‘This means that for a few weeks they are much more vulnerable to predators and territorial birds. To stay safe, they keep as quiet as possible and hide themselves away.’

Birds also don’t need to rely on bird feeders quite as much in late summer, thanks to a rise in readily available summer grain, berries and fruit.

However, if you want to attract birds back to your garden, the RSPB advises keeping a little food in your feeders.

‘Keeping a little food in your feeders over the summer will remind your regulars that you’re still open for business and provide a welcome food source to passing birds,’ it advised.

‘When summer fades away and food sources start to dwindle, the birds will remember where your feeders are and come flying back, bringing your garden to life.

‘Just make sure that the food remains fresh so it doesn’t start rotting, or become a carrier of diseases. To minimise food waste, try putting in just a little bit of food at a time and changing it frequently.’

Meanwhile, the charity suggests that garden owners should put out water to help the birds stay hydrated and clean their feathers.

It added: ‘Try leaving piles of leaves or putting out insect hotels to encourage bug life, planting greenery such as rowan or holly that will produce berries in the colder months, or putting out water so they have something to drink and clean their feathers with.’

leave, out, people, RSPB, to, urges
You may also like: