Sabre-toothed cats were deadly long-distance hunters that attacked their prey in packs during daylight hours 50,000 years ago, DNA study reveals

Sabre-toothed cats had a specific strategy when hunting, they operated in packs, during the day and ran for so long their prey became exhausted.

This was made possible by genetic traits which were actively selected for and enhanced its endurance and social skills, new research has found.

The apex predators are, along with woolly mammoths, one of the most famous extinct animals to live during the last Ice Age.

They weighed up to a ton and grew to more than ten feet long – equivalent to a male polar bear, the biggest living land predator. 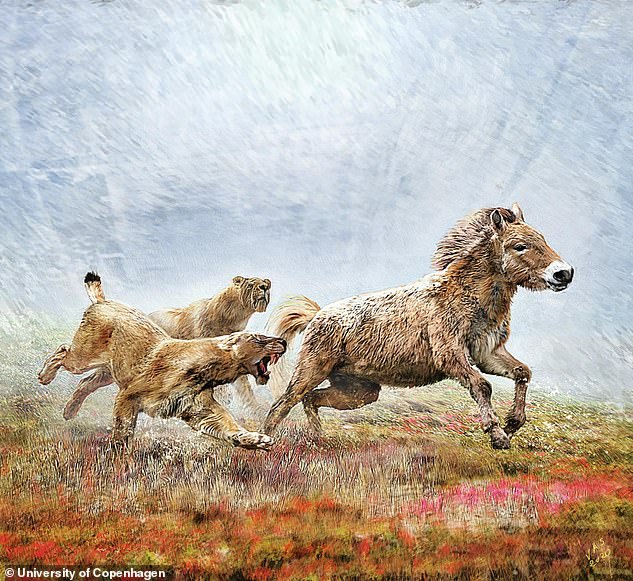 Sabre-toothed cats (pictured, artist’s impression) were genetically hardwired for endurance and team work. It allowed the animals to conduct long day time hunts and wear down their prey

A scimitar-toothed cat (Homotherium latidens) from the Canadian permafrost was dated as at least 47,500 years old and had its full genome mapped by scientists.

‘They had genetic adaptations for strong bones and cardiovascular and respiratory systems – meaning they were well suited for endurance running.

‘Based on this, we think they hunted in a pack until their prey reached exhaustion with an endurance-based hunting-style during the daylight hours.’

The analysis by the University of Copenhagen reveals the iconic beast would have brought down deer, buffalo, antelopes, camels, bison and ancient horses in groups.

A separate aspect of the study looked at its genetic similarity to modern big cats, such as tigers and lions, and revealed they are only very distantly related.

The lineage which created the extant large felines split from the one of the sabre-tooth around 22.5 million years ago, making them more distant cousins than apes are to humans.

‘They were present on five continents and roamed the earth for millions of years before going extinct.

‘The current geological period is the first time in 40 million years that Earth has lacked sabre-tooth predators. We just missed them.’

They have fascinated scientists for over 200 years after the first ever specimen was found in the early 19th century.

Since this initial discovery, in Alberta, Canada, examples of this group of carnivores have been discovered all around the globe, on every continent except for Australia and Antarctica.

The study is published in the journal Current Biology.

The sabre-tooth tiger may have been capable of slaying mammoths and rhinos, but it only had relatively small teeth until the age of three.

But once they emerged, they grew twice as quickly as the lion’s, for example.

The sabre-tooth tiger, now more accurately known as the sabre-toothed cat, Smilodon fatalis, lived in North and South America until it became extinct 10,000 years ago.

The big cats are famous for their protruding canines, which could grow up to seven inches (18 cm) long.

Although well-preserved fossils are available to researchers, very little is known about the ages at which the animals reached key developmental stages and grew teeth, for example.

They used data from stable oxygen isotope analyses with X-rays and information from previous studies to calculate when the prehistoric cats’ permanent upper canines came through, as well as other growth events.

They believe that the cats got most of their teeth by 14 to 22 months, with the exception of their famous ‘fangs’.

The experts say the long teeth didn’t develop until the cats were around three years’ old, which is delayed in comparison to similar-sized living members of the cat family. 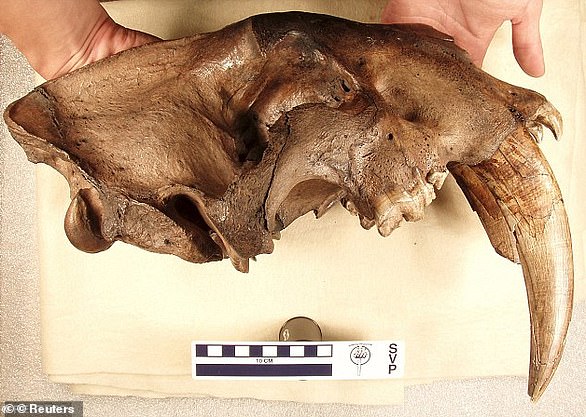