Samsung’s Galaxy Z Flip has been revealed in a ‘leaked’ hands-on video showing a metallic case and two screens, including a 6.7-inch foldable display.

The video was shared by serial leaker Ben Geskin but it’s not clear where the video originated from and it doesn’t show a lot of detail.

In the video the phone is flipped open with one hand, revealing the screen inside before it is closed and then turned over to show a small notification screen.

Earlier leaks revealed that the vertical ‘claim shell style’ folding phone will come with a 6.7 inch OLED screen and ‘ultra thin glass’ rather than plastic.

Samsung are expected to announce the new device at the Unpacked event in San Francisco on February 11 although this has not been confirmed by the company.

Leaks suggest there will be two displays on the device, one on the inside that folds on top of itself and a second one to show time and notifcatons on the outside.

It’s outward facing camera array will have two lenses that include a 12 MP main lens and another 12 MP ultra-wide lens while an interior lens will be 10 MP.

Charging-wise the phone will use USB-C and will also not come with a physical headphone jack.

Notably, the earlier renders show the first look at the Z Flip’s color schemes, which will apparently come in either purple, as seen in the leaked video, and black. 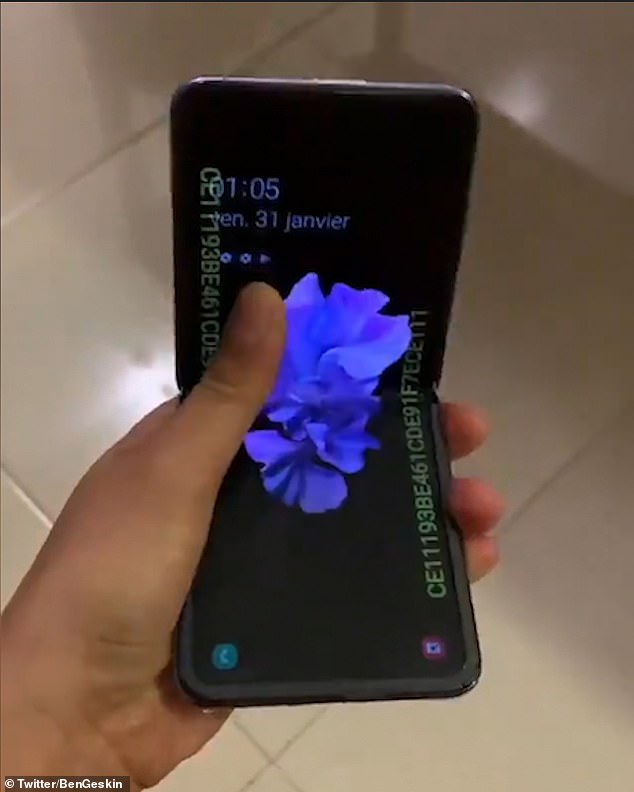 While its new form factor will push boundaries on the current crop of foldable phones, is internal specs match more of a mid-grade device.

For example it’s CPU, the Snapdragon 855 is not the latest chip from Qualcomm and its camera array lacks the luster of other similarly priced devices.

Compared to other direct competitors like Motorola’s foldable Razr, however, the device will likely hold its own. 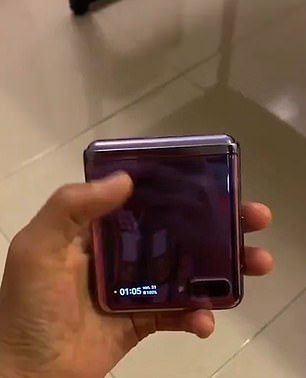 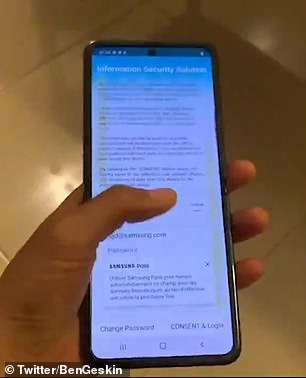 In the video the phone is flipped open with one hand, revealing the screen inside before it is closed and then turned over

XDA Developers, which has leaked several details about a different Samsung flagship, the Galaxy S20, says the Z Flip will use a reported ‘Ultra Thin Glass’ on top of an AMOLED display.

This means the phone will stand apart from other models of foldable phones including the upcoming Motorla razr and Samsung’s original Galaxy Fold, both of which have plastic screens.

While the new hardware sounds intriguing, Max Weinbach of XDA Developers reports that it will not solve one of the biggest drawbacks to foldable display technology – a noticeable crease located above the hinge.

flip, galaxy, R., Samsungs, Z
You may also like: