Scientists in the US have found a way to plant ideas in people’s heads as they sleep to make them have bizarre, abstract dreams.

Using so-called targeted dream incubation (TDI), experts at the Massachusetts Institute of Technology (MIT) have been able to guide people’s dreams toward particular themes by repeating information during the earliest stage of sleep.

This stage is known as hypnagogia, and is generally associated with dreams about psychedelic phenomena.

The technique uses a basic set-up consisting of a wrist-worn electronic sleep-tracking device called Dormio, which tracks when the wearer is asleep, and an app, which delivers audio prompts.

In trials, the scientists were able to influence the dreams of most study participants to dream about a tree during hypnagogia.

Researchers also used the ‘Dormio’ system to induce a dream about the chocolate fountain from the classic 1971 film ‘Willy Wonka and the Chocolate Factory’. 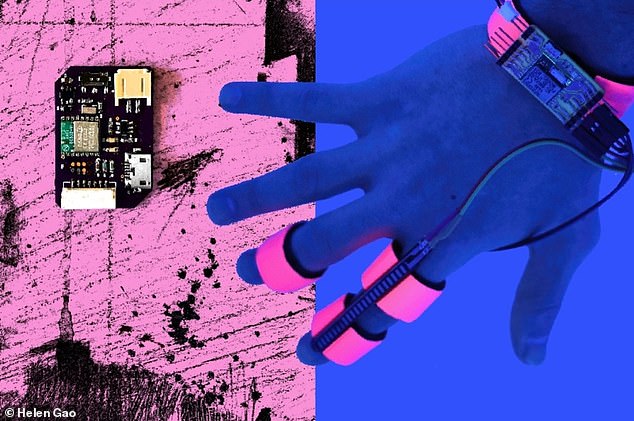 The Dormio technology, which is worn on the hand, works together with an app to manipulate the contents of the wearer’s dreams

Hypnagogia is similar to the deepest sleep stage, known as REM, in terms of brainwaves and experience.

However, unlike REM, individuals can still hear audio during hypnagogia while they dream, which can influence the content of dreams.

That’s why the sound of music playing or people talking can often play a part in our dreams during the lightest sleep stages.

‘It’s like turning the notch up high on mind-wandering and making it immersive –being pushed and pulled with new sensations like your body floating and falling, with your thoughts quickly snapping in and out of control.’ 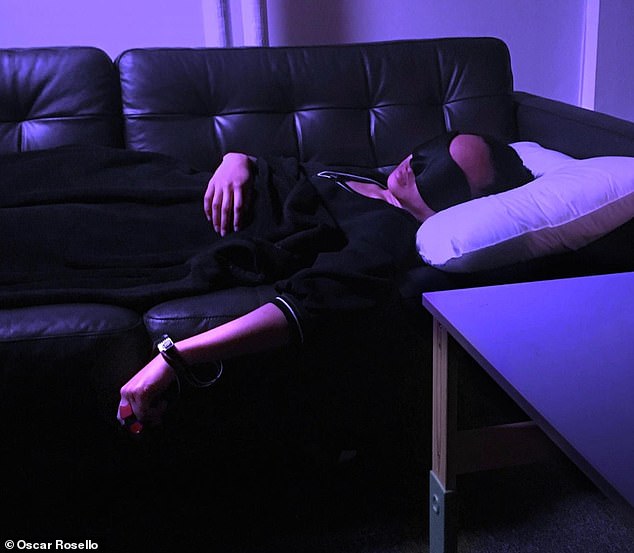 The system in use. Upon awakening from hypnagogia, the earliest stage of sleep, participants were asked to submit dream records

MIT designed and developed their sleep-tracking device that can alter dreams by tracking hypnagogia.

They then record themselves speaking an audio prompt using the app, which gets replayed during multiple stages of consciousness including wake, sleep onset and sleep.

These audio prompts can consist of anything the user decides they want to dream about, but in the case of MIT’s experiments, they consisted of sentences including ’remember to think of a tree’ and ‘remember to observe your thoughts’.

The hand-worn sleep tracker then monitors the wearer’s heart rate and electrodermal activity – changes in the resistance of the skin to a small electrical current based on sweat gland activity.

These changes helped researchers detect when the wearer entered hypnagogia and was liable to incorporate ‘information into dream content’.

At this point, the audio prompts were delivered to the sleeper at precise times in the sleep cycle, ascertained by the incoming physiological data.

Upon lying down, the web app instructed these participants to ‘think of a tree’.

Once entry into hypnagogia was determined by the app, a timer was triggered, which woke participants up at various times between one and five minutes, to allow participants ‘to experience different depths of sleep’.

At the end of this time, participants were woken up with the words ‘you’re falling asleep’ and were asked to report what was going through their mind, with verbal responses recorded.

The app then instructed them to ‘remember to think of a tree’ and that they could go back to sleep.

‘This loop of events was repeated for 45 min, enabling the collection of multiple hypnagogic reports’, the experts say, at which point participants were fully awoken.

‘Dream reports’, which were then collected via audio and transcribed into typed text, revealed some far-fetched tree-related dream settings. 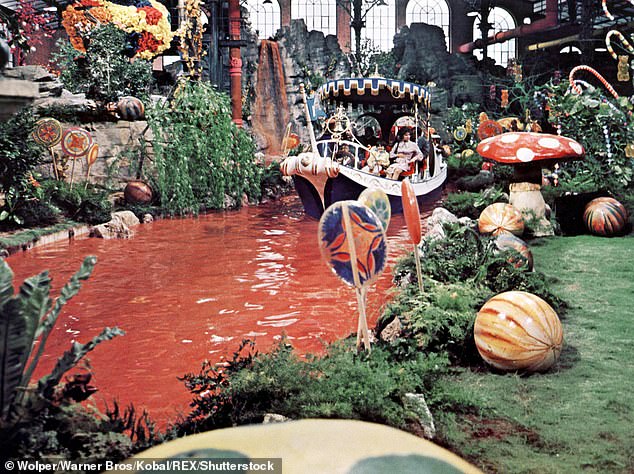 One subject said of their dream: ‘I was following the roots with someone and the roots were transporting me to different locations. At each location I was trying to find a switch.

‘I could hear the roots of the tree pulsating with energy as if they were leading me to some location.’

‘Dream reports increased in bizarreness and immersion with each awakening’, according to the experts at MIT.

The dream of the earliest awakening simply consisted of ‘trees, many different kinds, pines, oaks’.

Whereas on participant who dreamed longer reported: ‘I’m in the desert, there is a shaman, sitting under the tree with me, he tells me to go to South America…’

Tomás Vega at MIT Media Lab tested the system by prompting himself to dream about one of his favourite films – ‘Willie Wonka and the Chocolate Factory’.

His audio prompt consisted of the chocolate factory’s workers, the Oompa Loompas, singing their signature song.

But the chocolate waterfall in his dream was dark chocolate, which suited the lactose intolerant computer scientist.

‘So, is my lactose-intolerance knowledge in my consciousness or in my subconscious?’ he said.

‘I induced this dream content, but there were still some constraints, like, you cannot just dream about milk chocolate because that’s going to harm you.’ 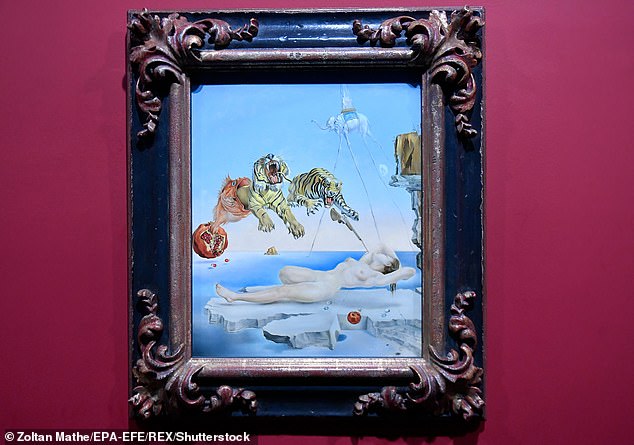 Dream Caused by the Flight of a Bee Around a Pomegranate a Second Before Awakening by Salvidor Dali, who often drew on themes of dreaming

Upon awakening, a person’s guided dream content could be used to complete tasks such as creative story writing.

‘Most sleep and dream studies have so far been limited to university sleep labs and have been very expensive, as well as cumbersome, for both researchers and participants,’ said study author Pattie Maes at MIT Media Lab.

‘Our research group is excited to be pioneering new, compact and cheap technologies for studying sleep and interfacing with dreams, thereby opening up opportunities for more studies to happen and for these experiments to take place in natural settings.’

Historical figures like writer Mary Shelley and artist Salvador Dalí were inspired creatively by their dreams.

For example, Dalí’s 1944 surrealist masterpiece ‘Dream Caused by the Flight of a Bee Around a Pomegranate a Second Before Awakening’ depicts a dream of his wife Gala in the moments before awakening.

But MIT’s technology could also have more serious uses, such as helping people confront sources of stress and trauma.

‘Apart from benefiting scientists, this work has the potential to lead to new commercial technologies that go beyond sleep tracking to issue interventions that affect sleep onset, sleep quality, sleep-based memory consolidation, and learning,’ said Maes.

The research has been detailed in the journal Consciousness and Cognition.

THE FOUR STAGES OF SLEEP

Sleep is generally separated in four stages. The first three of these are known as ‘non rapid eye movement’ or NREM sleep.

The last stage is known as rapid eye movement or REM sleep.

A typical night’s sleep goes back and forth between the stages.

Stage 1: In the first five minutes or so after dropping off we are not deeply asleep.

We are still aware of our surroundings but our muscles start to relax, the heart beat slows down and brainwave patterns, known as theta waves, become irregular but rapid.

Although we are asleep during Stage 1, we may wake up from it feeling like we didn’t sleep at all.

After around five minutes our bodies move into stage two.

Stage 2: This is when we have drifted into sleep, and if awakened would know you we been asleep. Waking up is still fairly easy.

This stage is identified by short bursts of electrical activity in the brain known as spindles, and larger waves known as K-complexes, which indicate that the brain is still aware of what is going on around it before turning off to a sub-conscious level.

Heartbeat and breathing is slow, and muscles relax even further.

Brain wave activity slows but is marked by brief bursts of electrical activity.

Stage 3: Stage 3 non-REM sleep is the period of deep sleep that we need to feel refreshed in the morning.

It occurs in longer periods during the first half of the night.

Our heartbeat and breathing slow to their lowest levels during sleep and brain waves become even slower.

Our muscles are relaxed and it people may find it difficult to awaken us.

The body repairs muscles and tissues, stimulates growth and development, boosts immune function, and builds up energy for the next day.

Hypnagogia – the transitional state between wakefulness and sleep – is associated with NREM stages one to three.

Our eyes move rapidly from side to side behind closed eyelids.

Our breathing becomes faster and irregular, and heart rate and blood pressure increase to near waking levels.

Most dreaming occurs during REM sleep, although some can also occur in non-REM sleep.

Arm and leg muscles become temporarily paralysed, which prevents us from acting out our dreams.

As we age, we sleep less of your time in REM sleep.

Memory consolidation most likely requires both non-REM and REM sleep.

Source: US National Institutes of Health

a, Find, plant, scientists, to, Way
You may also like: