Scientists sketch out what future Mars colonies could look like

Is this what future Mars colonies will look like? Scientists design self-sustaining research base

Is this what future Mars colonies will look like? Scientists sketch out of self-sustaining research bases that could one day take root on the red planet

A team of researchers have developed a plan for how humans could colonize Mars, the Moon or potentially any planet in the solar system.

In a new study, scientists from Switzerland’s École Polytechnique Fédérale de Lausanne (EPFL) designed a self-sustaining research base that could potentially support manned missions for several years at a time.

The multi-step plan involves sending a robot to Mars to build the base, harnessing the red planet’s natural resources and ultimately sending a crew to its surface that could live there for at least nine months. 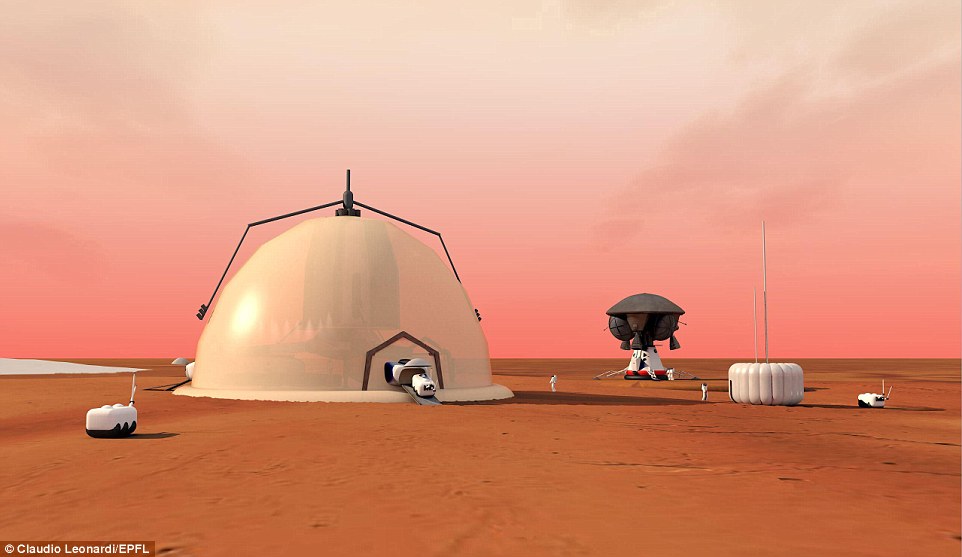 Like others have theorized before, EPFL scientists believe humans are most likely to find success setting up a base at the North pole of Mars.

Many experts, including tech billionaire Elon Musk, have suggested that Mars’ poles are suitable for sustaining human life because they contain vital natural resources.

‘The poles may pose more challenges in the beginning, but they are the best location for the long term since they harbor natural resources that we may be able to use,’ Anne-Marlene Ruede, lead author of the study, said in a statement.

‘We wanted to develop a strategy based on technologies that have been selected accordingly and outline a test scenario so that 20 years from now, astronauts will be able to carry out this kind of mission.’

Their plan envisions that the research base could one day support human colonies – something that would be developed over the next several generations.

It follows a NASA competition calling for teams to submit 3D-printed habitats that they believe could be used to colonize the red planet in the coming decades.

The research base would consist of three different modules, according to scientists. 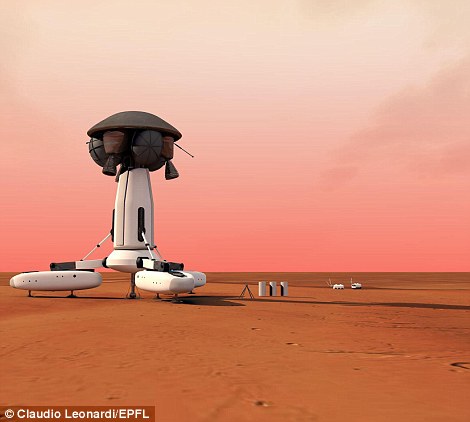 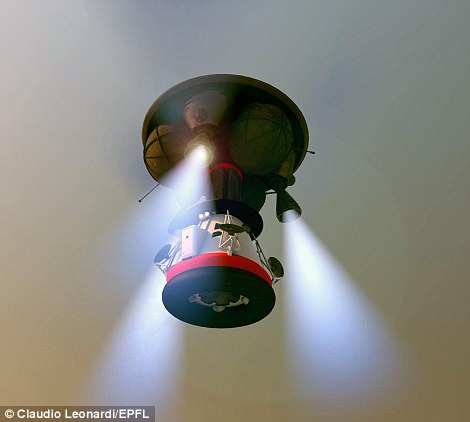 They envision sending a robot to Mars to build the base, harnessing the red planet’s natural resources and sending a crew to its surface that could live there for at least nine months 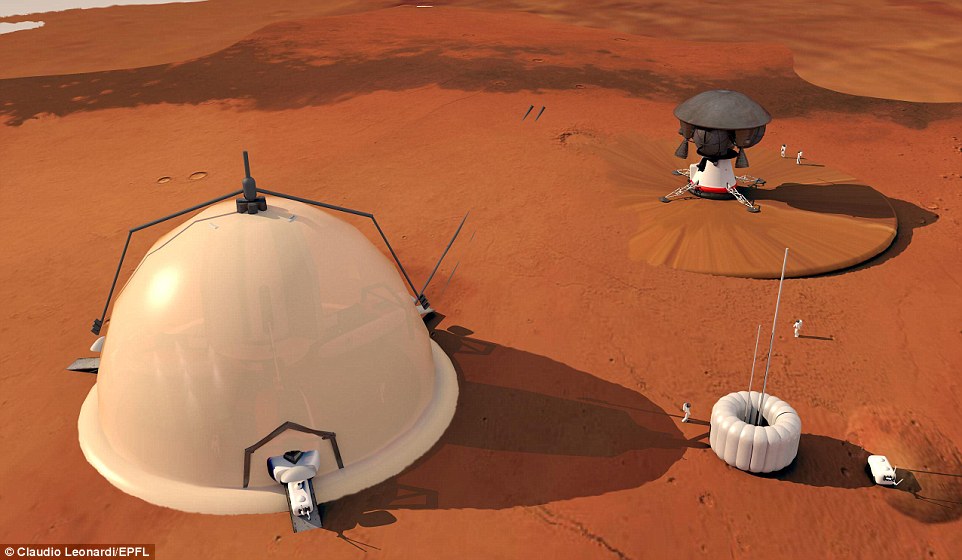 The main fixture of the base would include a central core that’s 12.5 meters high and five meters in diameter. Three living capsules would be attached to the core via airlocks

The main fixture of the base would include a central core that’s 12.5 meters high and five meters in diameter.

Scientists describe it as a ‘minimal living space’ that would house all important materials and goods.

Three living capsules would be attached to the core via airlocks.

Covering the space would be a dome made up of polyethylene fiber and a three-meter thick layer of ice, making it a pseudo-igloo structure.

‘The dome would also represent an additional living space, provide a second barrier to protect the crew against radiation and micrometeoroids, and help keep the pressure constant inside the base,’ according to the study.

Additionally, they envision creating a crane system that would orbit around Mars, serving as a transfer point for goods between shuttles coming up from Earth and the base on Mars. 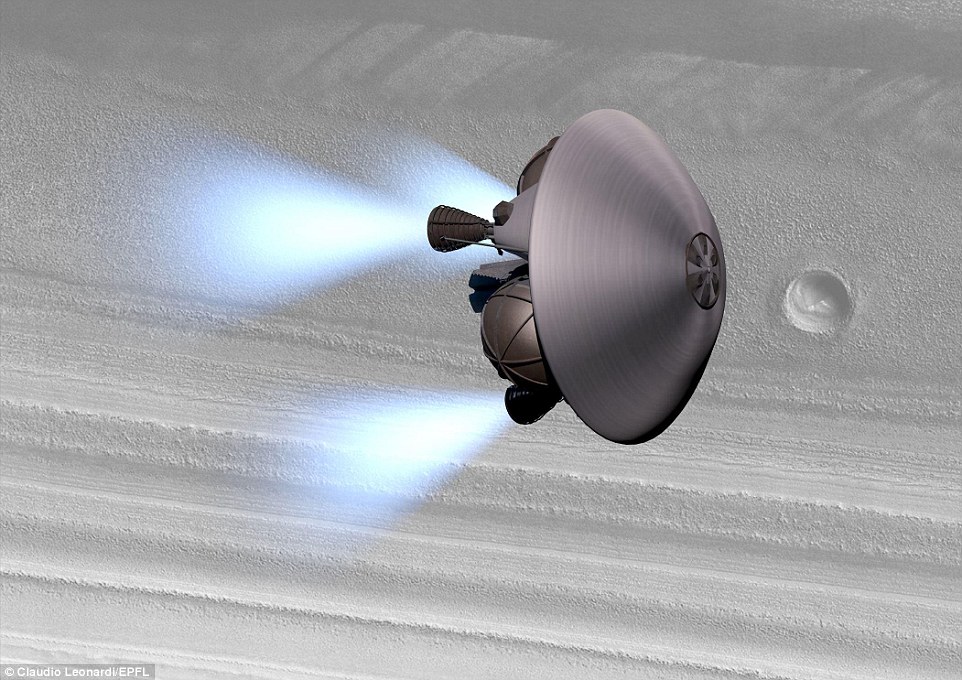 They envision creating a crane system (pictured) that would orbit around Mars, serving as a transfer point for goods between shuttles coming up from Earth and the base on Mars 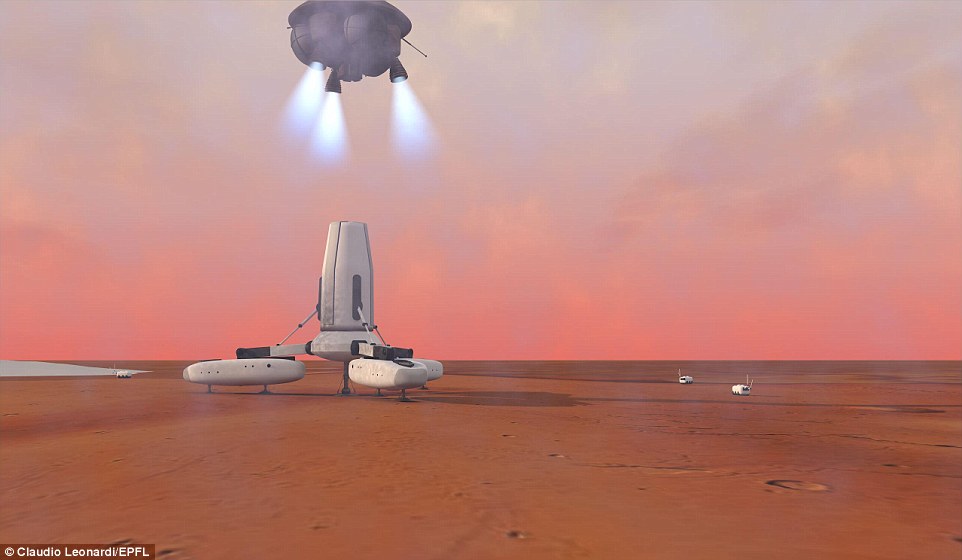 The crane would be able to be reused up to six times and reduce the size of the payload sent from Earth between each trip. Once a shuttle is docked, the vehicle unloads the cargo

It would be able to be reused up to six times and reduce the size of the payload sent from Earth between each trip.

‘The vehicle’s docking system would be similar to that used on the International Space Station: once a shuttle was docked, the vehicle would unload the cargo and crew and set them down on Mars,’ the researchers noted.

Before sending a crew to the red planet’s surface, they’d transport robots to Mars that could build the base before humans arrive.

The robots would also test natural resources available for use on site.

Once melted down, poles at the north and south of Mars are believed to be able to produce water, oxygen and nitrogen, which are all needed to support human life.

Other chemicals in Mars’ air and materials in its soil are thought to be prime for construction of things like bricks, glass and plastic, or even fuels like hydrogen and methanol.

‘All that would make the research base self-sustaining for the long haul, the study noted. 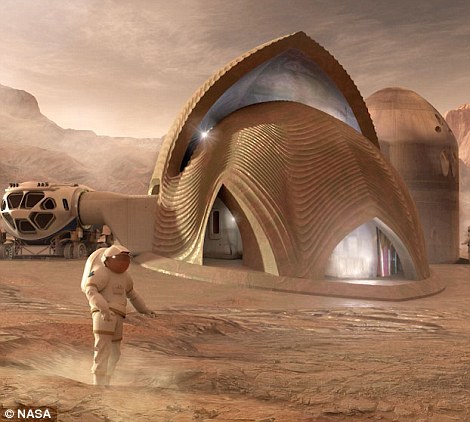 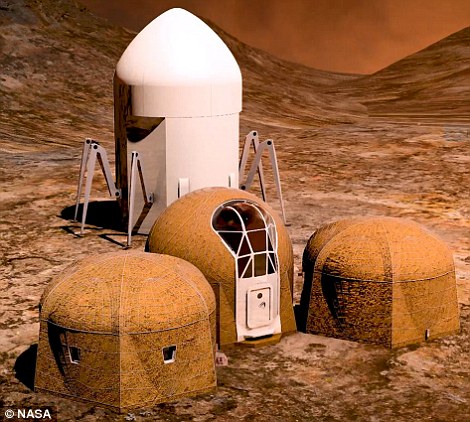 WHAT ARE NASA’S PLANS FOR A MANNED MISSION TO MARS IN THE 2030s?

Then, a six-person crew would be sent in. They’d arrive at Mars’ North Pole during the polar summer, ‘to take advantage of the 288 days of continuous light.’

‘This approach would minimize the payload that space shuttles would have to carry in and make the mission as safe as possible for the crew members,’ according to the study.

Beyond that, researchers believe there are crucial tests that need to be conducted before humans will be ready to use the proposed research base.

‘We would need to conduct an initial mission to try everything out for the first time,’ Ruede said.

‘And the better that initial mission is thought out, the faster we will be able to get things going and move on to colonization.’