Seaside holidays WILL survive global warming: Study shows some beaches will cope with sea-level rises by shifting towards land

A doomsday climate change prediction stating half of the world’s beaches will vanish by the end of the 21st century has been rubbished by new research.

The findings claim global warming will not spell the end of the world’s beaches, which are economically and ecologically vital to coastal communities.

The latest research says it is possible beaches will survive climate change by migrating landwards.

Beaches that have a firm barrier behind them however, such as Blackpool and Bournemouth, are still at risk as this prevents the beach from naturally retreating.

But those which do have ‘space to move’, such as Slapton Sands in Devon, will likely survive. 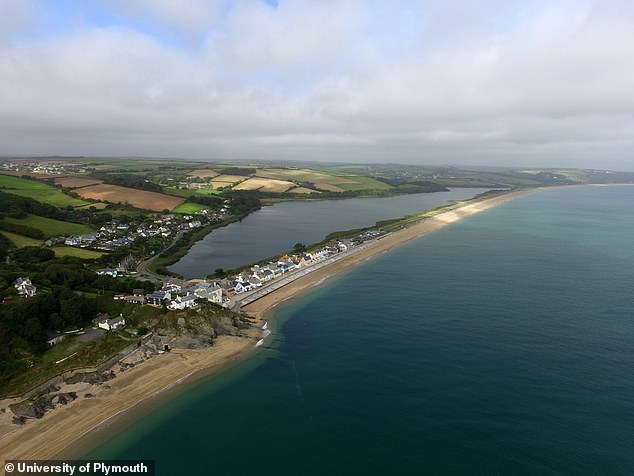 Researchers led by the universities of Plymouth and Sydney reassessed the previous study which was published in March 2020 in the journal Nature Climate Change.

At the time, the researchers claimed around 50 per cent of the world’s sandy beaches are at risk of severe erosion if greenhouse gas emissions continued= at their current rate.

But a scathing rebuttal published today in the same journal says the key to whether a beach is destroyed by global warming hinges on its ability to retreat.

It involved a comprehensive review of the previous study’s data, methods and conclusions and found it to be flawed.

The researchers used global data and numerical methods and say it is impossible to make the wide-reaching predictions of the previous study.

The belief is that if beaches have space to move into they will retain their overall shape and form but in a more landward position.

Lead author Professor Andrew Cooper, at Ulster University, said: ‘As sea level rises, shoreline retreat must, and will, happen but beaches will survive.’

Beaches that will undergo this change include those which are backed by low-lying coastal plains, shallow lagoons, salt marshes and dunes.

The findings apply globally, including the US and Australia to Mexico, Argentina, India and Brazil.

Predictions that sea level rise caused by global warming will see the world’s islands submerged under swelling currents may not come true, a new study suggests.

It claims that coral reef islands, such as the Maldives, could naturally adapt to survive surging water levels.

Previous research has claimed that sea level rise will cause islands to ‘drown’, with coral reefs being particularly susceptible, within decades.

However, an international team of scientists, led by the University of Plymouth, say this may not be a foregone conclusion. 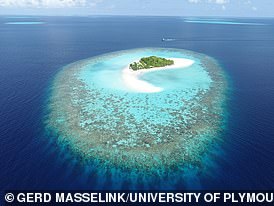 New research  claims that coral reef islands, such as the Maldives (pictured), could naturally adapt to survive surging water levels

Slapton Sands in Devon and Rivoli Bay in Australia are examples of such beaches which will adjust and survive, the researchers say.

However, beaches that are sandwiched between the water and a wall built as a sea defence will be unable to retreat, putting them at the most risk of extinction.

‘The biggest threat to the continued existence of beaches is coastal defence structures that limit their ability to migrate,’ Professor Cooper explains.

This include some of Britain’s most beloved seaside resorts.

‘I would say many popular beaches will disappear,’ he said.

‘For example, Blackpool has a seawall behind it that prevents the beach from migrating with rising seas level.

‘Bournemouth will be in trouble as well as it is backed by cliffs. But beaches with accommodation space will simply move up and back, as argued in the paper.’

Earlier this year he led a study which found that island ‘drowning’ is not inevitable as sea levels rise.

‘In the face of climate change and sea level rise, coral reef islands are among the most vulnerable coastal environments on the planet,’ he said in June.

‘Previous research into the future habitability of these islands typically considers them inert structures unable to adjust to rising sea level.’

As a result, much of the research looking at preventing this has gone into building coastal defences or removing inhabitants of island communities.

However, Professor Masselink says little attention has been paid to the natural robustness and adaptability of these islands.

‘These coral reef islands have developed over hundreds to thousands of years as a result of energetic wave conditions removing material from the reef structure and depositing the material towards the back of reef platforms, thereby creating islands.

‘The height of their surface is actually determined by the most energetic wave conditions, therefore overtopping, flooding and island inundation are necessary, albeit inconvenient and sometime hazardous, processes required for island maintenance.’

The ongoing climate crisis is on course to destroy half the world’s sandy beaches by the end of the century, a new study warns.

Sandy shorelines of many high-population areas and tourist hot-spots are threatened by erosion, climate change and surging sea levels.

But researchers offer a glimmer of hope and believe a moderate reduction in greenhouse gas emissions could prevent 40 per cent of the predicted loss.

Researchers from the European Commission’s Joint Research Centre in Ispra in northern Italy analysed 30 years worth of satellite images of sandy beaches.

Study author Dr Michalis Vousdoukas, who led the research, said: ‘The results indicate around 50 per cent of the world’s sandy beaches are at risk of severe erosion.

‘Half of the world’s beaches could disappear by the end of the century under current trends of climate change and sea level rise.

‘The situation can become more critical for small communities highly reliant on tourism.’

Sandy beaches occupy more than a third of the global coastline and are valuable in many ways as they provide economic income via recreation and tourism.

They are also very environmentally valuable as they provide natural protection from storms and cyclones.

And, beaches, holidays, seaside, W
You may also like:

Why children are less affected by Covid-19