Humans could soon be able to grow new LIVERS inside their own bodies by injecting healthy cells into their lymph nodes, scientists claim after a successful trial in pigs

Scientists have grown a liver in the lymph nodes of a pig and hope it could allow humans to grow their own replacement organs in future.

Livers have the ability to naturally regenerate, and a sliver of the filtration organ – if transplanted – can grow to full-size and become fully-functioning.

It is believed the lymph nodes provide a sanctuary for healthy liver cells, allowing them to slowly multiply and blossom into an ‘auxiliary organ’.

Trials in pigs shows that when the main organ was beleaguered with disease and began failing, the animal remained healthy because the auxiliary organ took over. 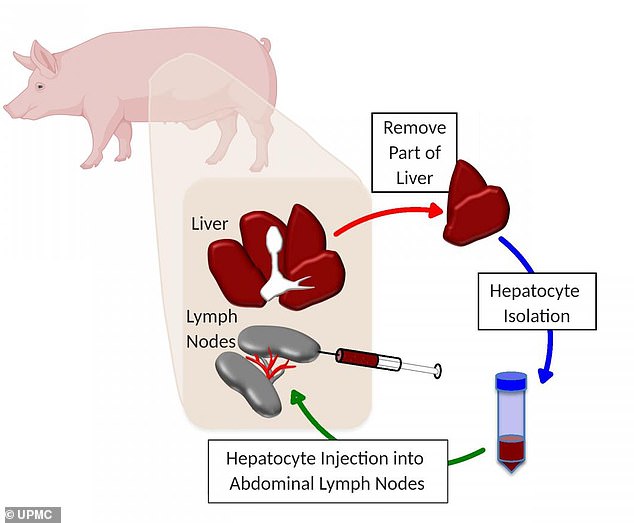 Researchers from the University of Pittsburgh gave six pigs liver failure by diverting blood supply and removing a chunk of tissue. They also took hepatocytes — the chief functional cells of the liver — and implanted them in the lymph nodes of the animals. Pictured, graphic showing how the cells were taken from the liver and then implanted in the lymph  nodes

Researchers from the University of Pittsburgh gave six pigs liver failure by diverting blood supply and removing a chunk of tissue.

They also took hepatocytes — the chief functional cells of the liver — from the animals and implanted them in their lymph nodes.

‘If hepatocytes get in the right spot and there is a need for liver functions, they will form an ectopic liver in the lymph node.’

Normally, the liver can regenerate and repair itself but significant damage can overwhelm this protective mechanism.

Many kinds of cancer cells often spread first to lymph nodes before traveling to distant organs through the bloodstream.

A study, published in Nature, found melanoma cells that pass through the lymph nodes pick up a protective coating, allowing them to survive high levels of oxidative stress in the blood and go on to form distant tumors.

Most cancer deaths happen after cancer spreads to other parts of the body through a process known as metastasis.

This occurs when cancer cells from the primary tumor spread through blood vessels or migrate through lymphatic vessels before entering the blood.

Assessments of the pigs revealed they remained healthy despite their main liver becoming increasingly poor.

Despite this, the pigs themselves showed improved liver function as the secondary organ took over the bulk of responsibilities.

Analysis of the lymph nodes revealed the implanted hepatocytes had grown and also formed a network of bile ducts and vasculature.

The auxiliary livers grew bigger when the damaged tissue in the animals’ native liver was more severe, but never grew out of control.

Previously, a smaller version of the experiment was also successful in mice, but it has taken a decade to scale it up to a larger animal to see if it offers hope for humans.

More recent research proved healthy liver tissue can grow in the lymph nodes of pigs with a genetic liver defect.

With the latest findings being so promising, the academics hope it could offer potential avenues for human medicine to treat liver damage from any cause, from hepatitis to alcoholism.

The findings are available in the journal Liver Transplantation.

grown, in, Liver, lymp, Pig, second
You may also like: