Secrets of the Spitalfields Roman Woman revealed: Buried in an elaborate silk dress with lavish purple embellishments, she ‘was part of Rome’s elite and moved to England after marrying’

Researchers are getting closer to uncovering the identity of a mysterious Roman woman who died in the 4th century AD and was buried in an elaborate grave in what is now Spitalfields Market in London.

The so-called Spitalfields Roman Woman, whose grave was first discovered in 1999, is though to have been a person of great wealth and influence, based on her richly decorated lead coffin and the gold-threaded robes she was buried in.

Now further studies of her remains, detailed in a new book, reveal that her garment was made of the highest-quality silk from China, and the thread in it is thought to be 97 per cent pure gold.

A band of wool that also made up her funeral attire has deteriorated over the 1,600 or so years since she died, and is now an uninspiring dark brown piece of material, but microscope analysis reveals it was originally purple.

In Roman Britain, purple was a hallmark of the rich and powerful, with the pigment needed to create the dye coming from a specific species of European snail. It is thought to have been the most expensive pigment in the world at the time.

Isotope analysis of her teeth also reveals she grew up and spent the bulk of her life in mainland Europe – most likely Rome itself – before marrying as a teenager and moving to England when her high-ranking husband.

It is still unclear who her husband was, as records of the last Roman rulers of Britain are scarce, but it is thought she may have been the wife of one of the senators at the very end of the Roman reign, between 350AD and 410AD.

Under the head of the Spitalfields Roman woman researchers found evidence of a pillow made of bay leaves, yet another indicator of the opulent life she led. Her lead coffin itself was adorned with an elaborate pattern of scallop shells (pictured) 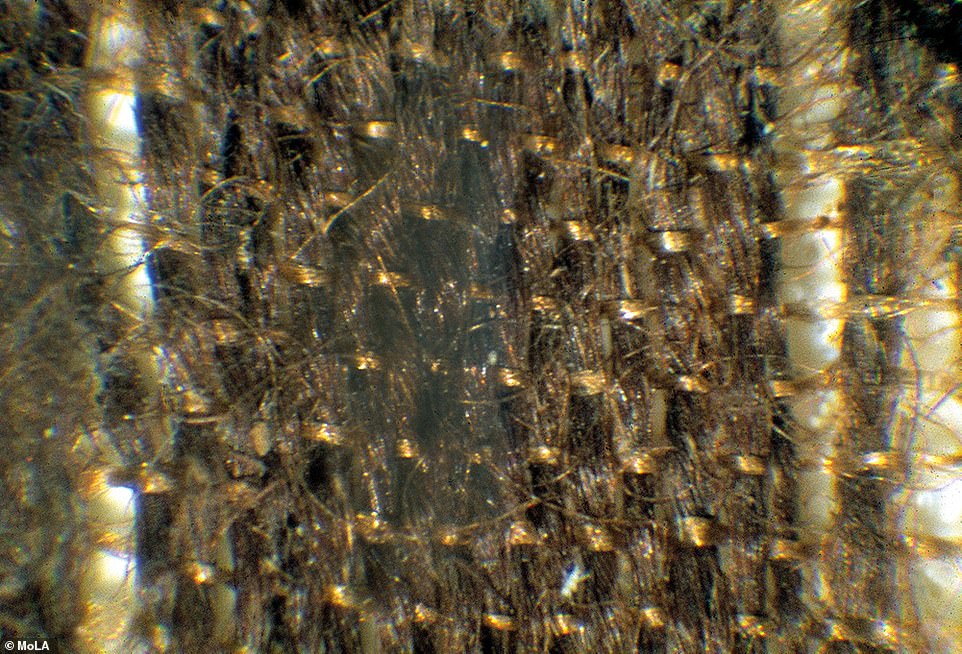 Over the 1,600 or so years since she died, a band of wool that also made up her funeral attire has deteriorated and is not an uninspiring dark brown piece of material. But microscope analysis reveals it was originally purple. In Roman Britain, purple was a hallmark of the rich and powerful, with the dye needed to create the colour coming from the pigment of a specific species of European snail. It is thought to have been the most expensive dye in the world. Pictured, microscope image of the wool

The new analysis of the Spitalfields Roman Woman is part of an ongoing 30-year project attempting to unpick the secrets of the region, which has been integral to trade for the last two centuries.

In the Roman cemetery where she was found are the graves of almost 500 individuals, and among these early burials there were five males for every female.

Experts say this could be because huge amounts of men migrated to London for labour, newborn girls were murdered deliberately, or perhaps more likely, females simply being buried elsewhere.

A whole segment of the cemetery was dedicated to young children, the study found. This is highly unusual as very few infant burials have previously been recorded in urban Roman cemeteries.

‘This is often explained in terms of the social status of children in the Roman colonies and classical beliefs that infants did not have souls being reflected in more casual burial practices,’ the archaeological company MoLA, which leads the project, said in a blog post.

‘This new evidence raises the question as to whether infants were instead being buried in as yet undiscovered separate cemeteries.’

The area was later used as a Medieval burial site, before becoming a priory in 1197 and an artillery company practice ground in the 17th century. 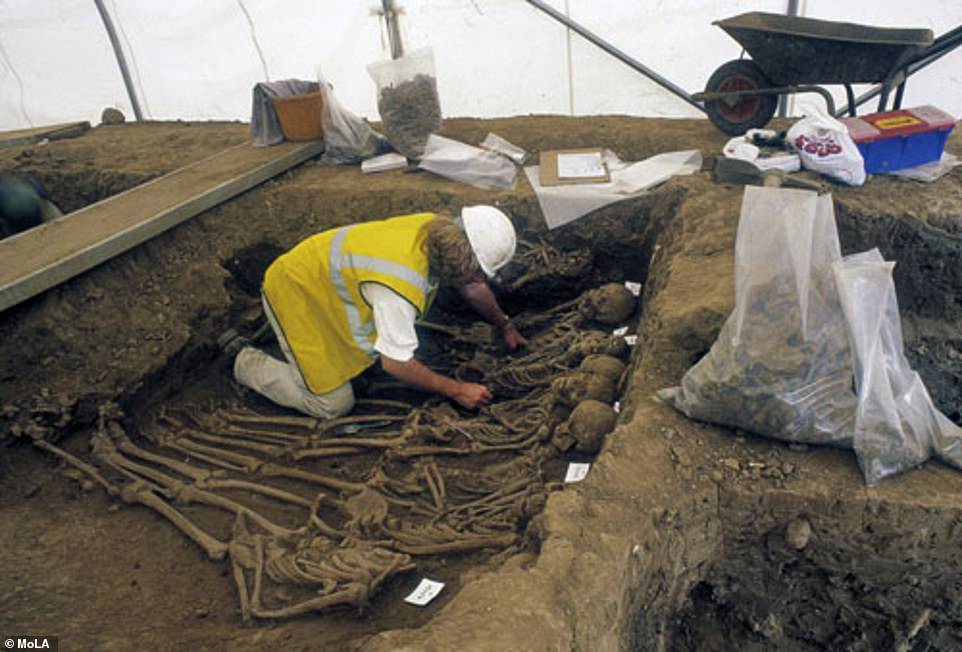 Pictured, mass burials unearthed from the St Mary Spital which sprung up several centuries after the demise of the Roman Empire in Britain 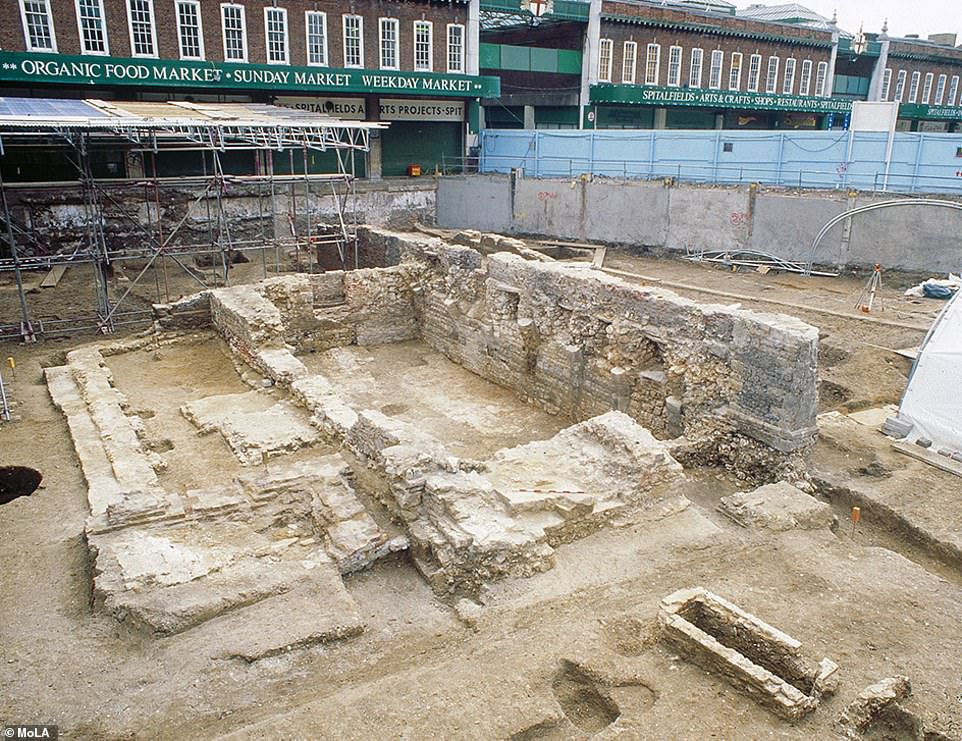 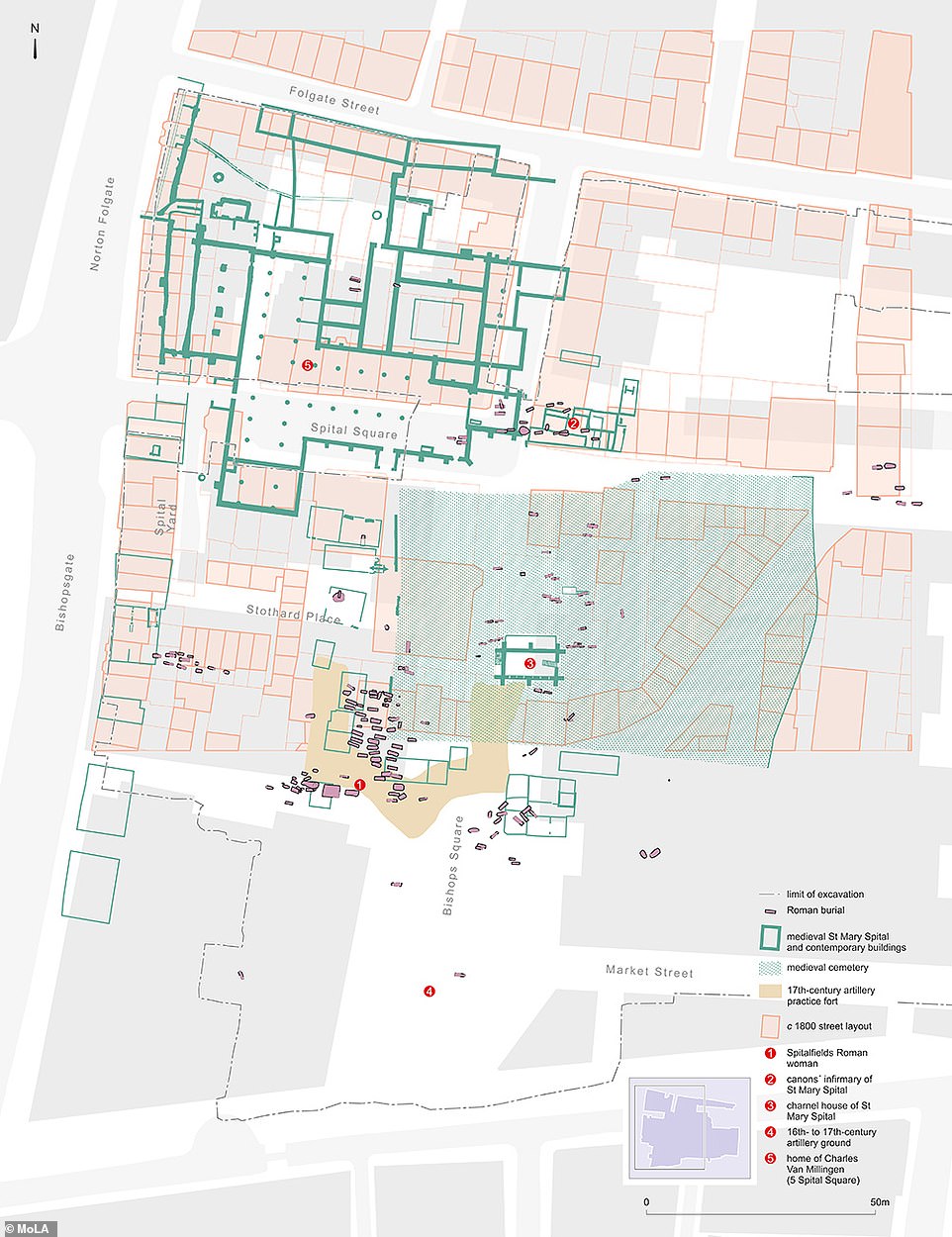 The Spitalfields Roman Woman herself died young, possibly during childbirth or from disease, but there is no inscription on her grave and no tombstone. Experts believe it may have been looted in the Medieval period to help build the city walls.

The new book scrutinised the enamel of her teeth, which is a popular technique of archaeologists, as teeth grow like tree rings, with a new layer forming every year.

Isotope analysis of the various rings reveals clues about diet, disease, location and other tidbits of information that can be used to piece together a complete picture of an individual’s life.

It reveals she grew up and spent the bulk of her life in mainland Europe, most likely Rome itself and that in her early years she had a bout of disease around the age of five.

She likely married as a teenager and moved to England when her high-ranking husband, who was probably much older than she was, was stationed there.

She was buried with various high-value grave goods, including two glass vessels that would have contained perfume. One was a 9-inch tall cylinder that had a unique dipstick made of the precious stone jet. 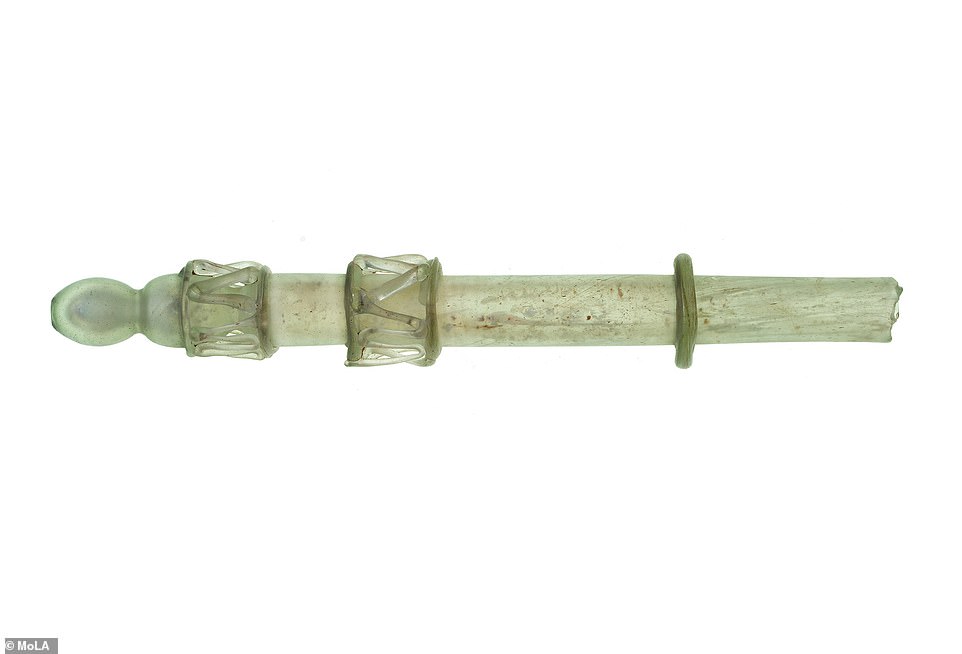 While most objects found with the Roman burials were fairly typical grave goods, five long, glass, pipette-shaped phials stood out. Thought to contain either perfumed oils for anointing the dead or wine for burial rites, these are rarely found in Britain, and never in such numbers. One phial in particular is unique: decorated with delicate zig-zag glass trails, it was found buried next to the foot of the late 4th-century AD sarcophagus of the ‘Spitalfields Roman woman’ (pictured) 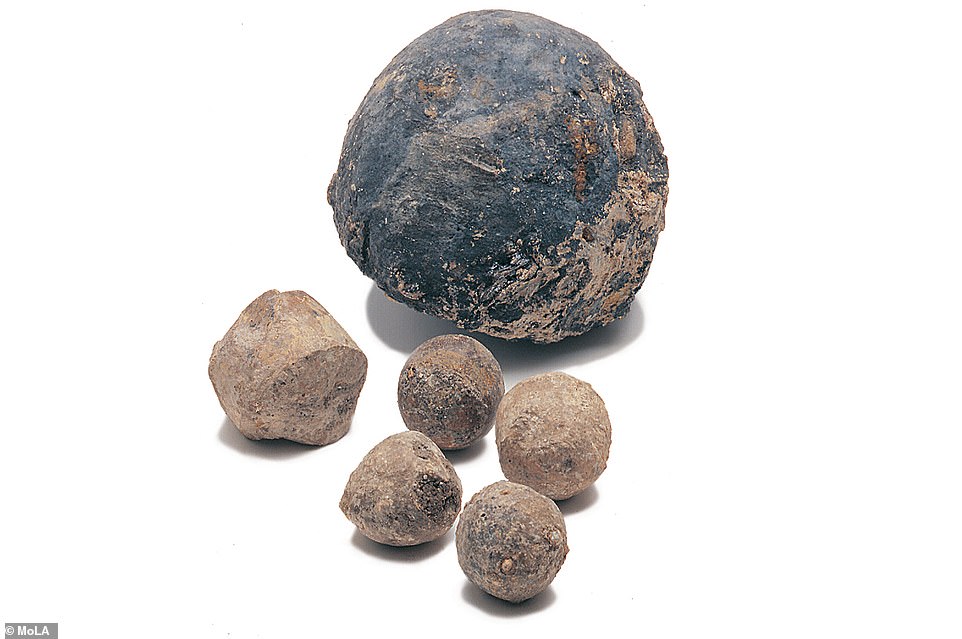 Pictured are a cannonball and musket balls from when the area became the site of the practice ground of the Artillery Company. Excavations revealed musket shots and cannon balls, and the remains of a practice fort and ditch where soldiers would have taken part in military exercises

Under her head, researchers found evidence of a pillow made of bay leaves, yet another indicator of the opulent life she led.

Her lead coffin itself was adorned with an elaborate pattern of scallop shells.

With all the grave goods and lavish trimmings of her burial, it is likely she was of senatorial rank, sitting atop the very highest rungs of the social ladder.

However, narrowing down her identity any further has proved extremely difficult, as there is no surviving record of the names of the wives of Britain’s latest Roman rulers.

of, Ro, secrets, Spitalfields, the
You may also like: