The Shetland Islands have been picked as the location for the UK’s first commercial rocket launch in 2021 when Lockheed Martin will put a small satellite into orbit.

The island of Unst has been picked as the location of a spaceport and Lockheed Martin is moving its £23.5 million grant to the island, Mail on Sunday reports.

If the spaceport on the small Scottish island is given planning permission by local authorities, the move could see dozens of new jobs generated in the area.

Lockheed Martin are using its UK Space Agency grant to identify a vertical rocket launch site and pending planning permission that will be the Shetland island.

According to Lockheed Martin the first satellite launched from the UK will be used to collect data from space that will ‘help drive growth across the country’. 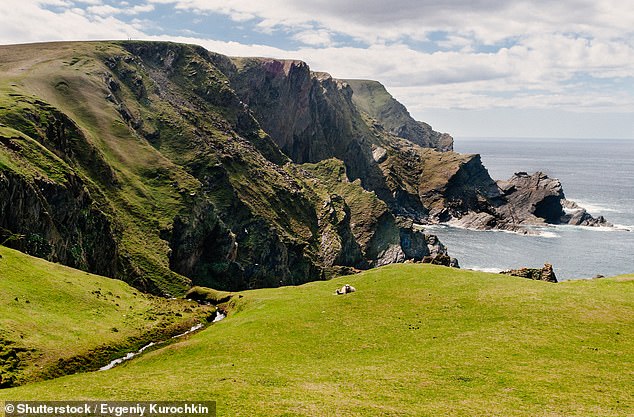 The island of Unst has been picked as the location of a spaceport and Lockheed Martin is moving its £23.5 million grant to the island, Mail on Sunday reports

The Sutherland Space Hub project is continuing but planning restrictions placed on the development mean only 12 launches can happen per year.

Much like the UK has multiple airports, with different airlines operating hubs out of various sites, the same is likely to be the case for future British spaceports.

Spaceports, such as Sutherland, will also be designed to work with multiple launch operators with several companies looking at the UK to launch rockets.

A UK Space Agency spokesperson said: ‘We continue to support the ambitions of all potential spaceport sites including Space Hub Sutherland and Shetland Space Centre, as well as the companies wishing to launch from these sites.

‘The UK Space Agency considers any proposed changes to grants very carefully to ensure our funding delivers long-term value to the UK.’

John Neilson, from Lockheed Martin, said they were proud to be working with Highlands and Islands and Shetland Space Centre on vertical launch operations.

An announcement about planning permission for Shetland is due to be made later this month by the official bodies involved in the multimillion-pound project.

The news of Shetland’s success will come as a blow for those behind a rival £17.3 million scheme in the Highlands at the Sutherland spaceport site.

British rocket firm Skyrora is also working with Shetland spaceport on the planning application to build the launch facility.

CEO, Volodymyr Levykin, said: “Skyrora is supporting and collaborating with all the vertical spaceports in the UK.

‘Our mobile launch complex allows Skyrora to be flexible and we’ll be ready to launch from any spaceport in 2022.’

The company is planning to launch its Skylark Micro rocket from Iceland later this month as part of a test programme ahead of future UK launches. 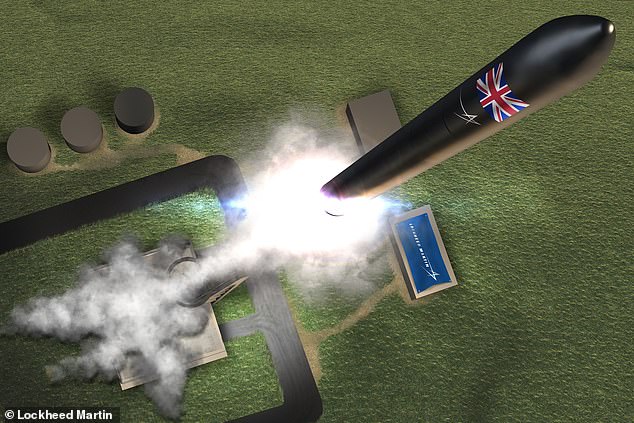 If the spaceport on the small Scottish island is given planning permission by local authorities, the move could see dozens of new jobs generated in the area

It is only two months since Space Hub Sutherland received planning permission for their project, and a decision last week by the Scottish Government not to call in the plans for a public inquiry was interpreted as a green light.

Lockheed Martin is expected to continue to work with Sutherland, but will move the bulk of its business and grant funding to Shetland, the Mail on Sunday reported.

Provided the site earmarked for the spaceport on Unst is given planning approval, it is thought likely that the first rocket launch will take place at the end of next year.

Mr Neilson told the Mail on Sunday in Scotland: ‘With a project of this complexity, we continually review our plans to maximise the chance of mission success.

‘Project updates will be provided as and when programme milestones are achieved.’

A decision to move their focus is thought to have followed tests which found more rockets could be launched, with a wider range of payloads, from Shetland.

Industry sources say Lockheed Martin likely see both sites as complementary, with each offering different types of launched for a range of clients.

A full planning application for the Shetland Space Centre is expected to go before the local authority within the next two months.

They will build three launch pads at Lamba Ness and Saxa Vord – one to be operated by Lockheed Martin and two smaller ones to be used by other interested companies.

It is understood the local landowner and crofters have given the project their backing, as has the 600-strong island community.

An insider told the Mail on Sunday: ‘For a spaceport to thrive, it needs to get to a critical mass of launches over a period and Shetland is able to deliver more than twice the capacity than Sutherland.’

They told the paper that it all came down to geography and physics – you can’t fly rockets over centres of population or oil installations.

‘Rrocket companies have discovered with the Sutherland site they would be left having to make a dog leg turn to avoid everything,’ the insider said.

‘That is still feasible but you’d need a bigger rocket and a smaller payload, so the economics of it fall away quickly.’

While the entire island community of Unst support the spaceport plans, residents living around the proposed Sutherland site are divided.

This is due to its threat to peatland and wildlife on the A’Mhoine peninsula.

Unst sits 150 miles off the tip of the Scottish mainland with a population of about 600 and is already the most northernly inhabited part of the British Isles. 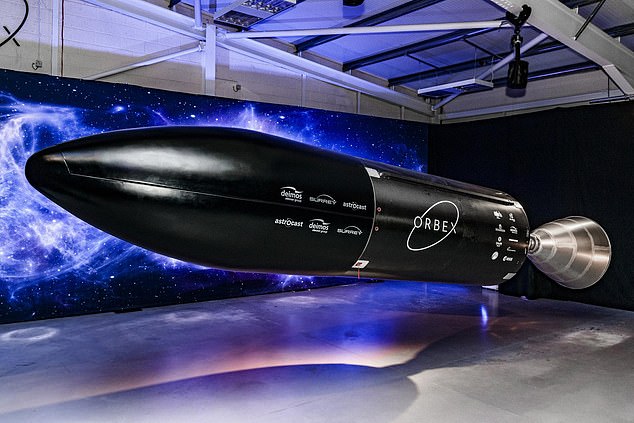 The island is very remote – it takes a 12-hour ferry journey or a short flight from Aberdeen and then two ferry crossings from Mainland to Unst.

Unst is a 46-square mile outcrop, usually more popular for its giant cliffs, jagged sea stacks and bird-watching and was once a Viking stronghold.

The satellites will be about the size of a washing machine and will cover everything from high speed broadband to information gathering.

Unst is also proving a popular choice due to its high latitude giving it an unobstructed route to space – no flight route or military aircraft testing.

Also, satellites passing overhead on their 90-minute circumnavigation of the globe are visible for longer in Unst’s skies – aiding collection of data.

An established oil and gas industry has meant Shetland’s infrastructure is already fit to rival any major hub and the spaceport will be built at Lamba Ness and Saxa Vord, where there were Ministry of Defence sites.

Scotland makes more satellites than any country outside of the United States but companies – such as Spire Global and Clyde Space – at present have to ship their satellites from Glasgow to the US and Kazakhstan. 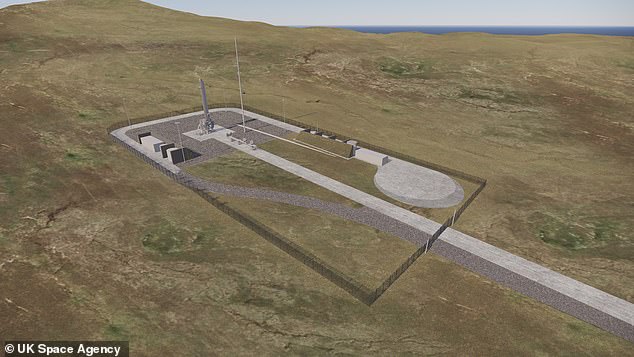 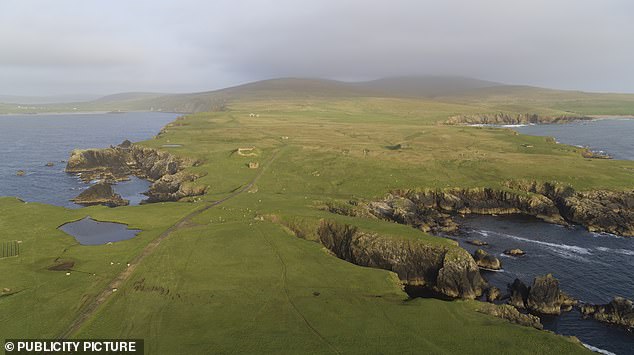 The government has aimed to grow the UK’s share of the global space market to 10 per cent by 2030 and has already awarded grants totalling £40 million.

These grants have been designed to establish commercial vertical and horizontal small satellite launches from British spaceports.

As part of this move the government purchased a 45 per cent stake in bankrupt satellite company OneWeb for £382 million.

It’s not just vertical launches, Newquay, in Cornwall, is thought to be favourite still to win the ‘space tourism’ race, eventually offering the first suborbital flights to those wanting to boldly go on holiday to somewhere out of this world.

Among those interested in the site are Sir Richard Branson’s Virgin company, which is planning horizontal launches from Virgin Galactic sister firm Virgin Orbit.

Other spaceport contenders which were offered cash from a UK Government development fund in 2018 are Prestwick in Ayrshire, North Uist, in the Western Isles, Campbeltown, in Argyll and Llanbedr in Gwynedd, Wales.

launch, Shetland, the, UK&ap, will
You may also like: