Buzzybodies! Single mother bees scour their neighbours’ nests for signs of parasitic infection to find the best location for their own larvae to hatch

Solitary mother bees check out the state of neighbouring nests before deciding where to build their own, a new study has revealed.

They scour for signs of parasite infection at nearby nests and remember this information in a high-level mental process previously unknown in the flying insects.

While honeybees and bumblebees live in vast colonies and produce honey with a queen, most bee species live solitary lives.

They live on their own and do not produce honey and very rarely sting humans. 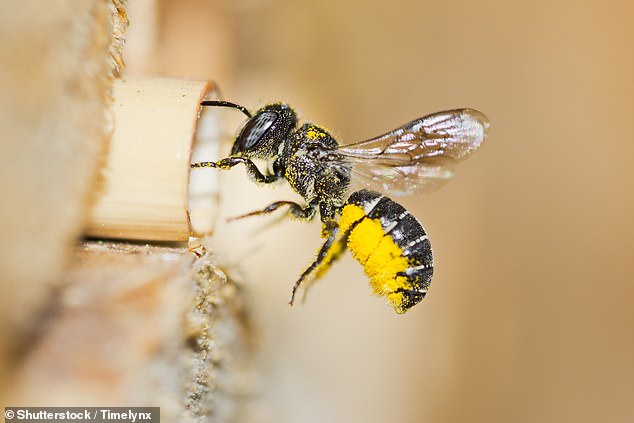 Solitary mother bees check out the state of neighbouring nests before deciding where to establish their own nest, study reveals. The animals live on their own and females build their own nests (stock)

The study, led by researchers at Queen Mary University of London, involved setting up artificial nests in parks and grasslands across England between 2016 and 2018.

Scientists labelled nests with symbols to mark them as infected with a dangerous parasite.

The bees then avoided setting up a nest near the symbols in other locations.

The researchers say this shows an impressive level of intellect to be able to process and retain such information.

Dr Olli Loukola, lead author and postdoctoral fellow at Queen Mary University of London and the University of Oulu, said: ‘It’s amazing that solitary bees are able to use such a complex strategy in their nest-site decisions.

‘It really requires a sophisticated cognitive flexibility and it is fascinating to uncover how much genius is found in these small-brained solitary bees.

‘Despite being solitary, these bees live in communities and can learn from each other.

WHAT ARE SOLITARY BEES?

The majority of wild bees are solitary varieties.

These animals lead different lives to their hive-dwelling counterparts such as honey bees and bumble bees.

They do not produce honey and therefore do not have to defend it so violently.

Males often have no sting at all and females only sting when handled roughly.

There are over 200 species of solitary bee species and 150 live in London.

‘As environmental factors such as nesting suitability, predation and parasitism change both spatially and over time, it makes sense for bees to glean information from their neighbours, even if they aren’t the same species.’

Most research on bee behaviour has focused on social bee species, but the majority of wild bees are solitary varieties.

They are less aggressive than their hive-dwelling counterparts as they do not produce honey and therefore do not have to defend it so violently.

Males often have no sting at all and females only sting when handled roughly.

Dr Lars Chittka, Professor of Sensory and Behavioural Ecology at Queen Mary University of London, said: ‘There are around 20,000 solitary bee species in total and about 150 live right here in London.

‘In these species, female individuals, ‘single mothers’ build their own nests. The male bees never do any work.

‘Our research suggests that despite the fact that these females largely work alone, they’re able to use cues in their environment and activities of other animals in their surroundings, to successfully protect their broods.’

Bees, inspect, mother, Nei, Single)
You may also like: