The 800-year-old shrine of the murdered 12th century Archbishop of Canterbury, Sir Thomas Becket, has been brought back to life in a stunning digital reconstruction.

A CGI film of the shrine at Canterbury Cathedral uses new evidence to show how it would have likely appeared before its destruction almost 500 years ago in the carnage of King Henry VIII’s Reformation.

Saint Thomas Becket was a hugely influential Archbishop of Canterbury and martyr during the 12th century.

A rift between Becket and his once-close friend King Henry II culminated in the king’s knights murdering the Archbishop of Canterbury in his cathedral in 1170.

King Henry II uttered the famous phrase – ‘Will no one rid me of this turbulent priest?’ – that led directly to Becket’s death.

Today marks 800 years since Thomas Becket’s body was moved from a tomb in the crypt of the cathedral into a glittering shrine – July 7, 1220.

But the shrine was tragically destroyed in 1538 amid Henry VIII’s upheaval of religion in Britain as he dramatically spurned the Pope. 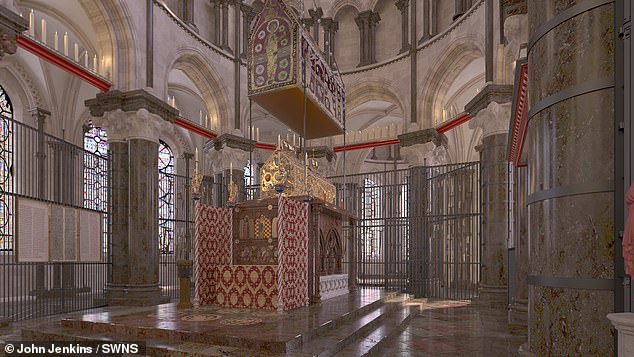 Released on the 800th anniversary of the creation of Saint Thomas Becket’s shrine, stunning CGI reconstruction uses new evidence to show how it would have likely appeared

The shrine of Sir Thomas Becket, who was canonised son after his infamous slaying, was the most important pilgrimage destination in medieval England, visited for hundreds of years by pilgrims seeking miraculous healing.

This digital reconstruction is the first to be based upon surviving fragments of the shrine discovered in and around Canterbury Cathedral since the nineteenth century.

It combines information from eye-witness accounts, theories from past historians, date of construction, materials used, details on accessibility, and its location to recreate how the shrine would have looked.

This new digital rendering is ‘the most accurate recreation of the shrine to date’, academics claim.

‘The murder of Thomas Becket stunned the whole of Christendom – all across Europe he was acclaimed as a martyr,’ said Dr John Jenkins, a historical researcher on the reconstruction team at the University of York.

‘Within 10 years of his death over 700 healing miracles had been recorded at his tomb and it rapidly became one of the most important three or four European pilgrimage centres.

‘So it is therefore appropriate that on the 800th anniversary of his shrine we publish our latest findings to explain how new discoveries have helped us create this reconstruction.’

Historians have long debated the true origin of some of the shrine’s fragments since they were first discovered in the 19th century.

c. 1120 Becket is born in Cheapside in London on St Thomas’ Day, December 21, the son of a textiles marchant named Gilbert

1145 The young man is taken on by Theobald, the Archbishop of Canterbury, propelling him into a position of power which led to his travelling around Europe

1154 Becket is made archdeacon of Canterbury and shortly afterwards enters the service of Henry II as chancellor, making him one of the King’s most trusted followers

1170 He returns to England but again fights with Henry after opposing the King’s attempts to crown his son. Killed in Canterbury Cathedral on December 29, apparently on Henry’s orders

However, many of them carry trademarks that link them to Trinity Chapel in Canterbury Cathedral.

Trinity Chapel stands at the east end of the cathedral and was built as a shrine to house the relics of Saint Thomas Becket.

‘The trefoil and stiff-leaf decoration on some of the fragments stylistically indicates a common origin, and they are very close in type and quality to the carved capitals of the Trinity Chapel,’ said Dr Jenkins.

‘Within the cathedral this marble is only found in the Trinity Chapel, which surely indicates that these fragments come from Saint Thomas’ shrine rather than any others.

The team’s model is based upon how the shrine would have looked in 1408, a time when the cult at Canterbury was visited by up to 100,000 pilgrims a year.

The reconstruction argues that the shrine was created much earlier, between 1180 and 1220, and would have likely taken more than 30 years to build and ornament.

The model includes a sturdy marble base and iron grilles, not featured in previous reconstructions, that enclosed the shrine.

The grilles ‘would serve to enhance a sense of mystery’ for visitors to the candle-lit shrine during its heyday.

Offerings in thanks for miraculous cures were attached to the grilles so that the shrine would be seen ‘through a curtain of proof of Thomas’s power to respond to prayer’.

‘We propose the shrine was a collaborative effort, with the marble base initiated and largely finished by William the Englishman and the vast expensive golden feretory brought to completion only under Elias of Dereham and Walter of Colchester almost four decades later,’ said Dr Jenkins.

The reconstruction forms part of a three-year AHRC-funded ‘Pilgrimage and England’s Cathedrals: Past and Present’ project.

It will be used as a heritage interpretation tool to help visitors to Canterbury and its cathedral go back in time to share the experience of medieval pilgrims.

It will also function as a research tool for researchers to complete further investigation to study the look, feel, and nature of the site.

The new reconstruction has been detailed further in a special volume of the Journal of the British Archaeological Association. 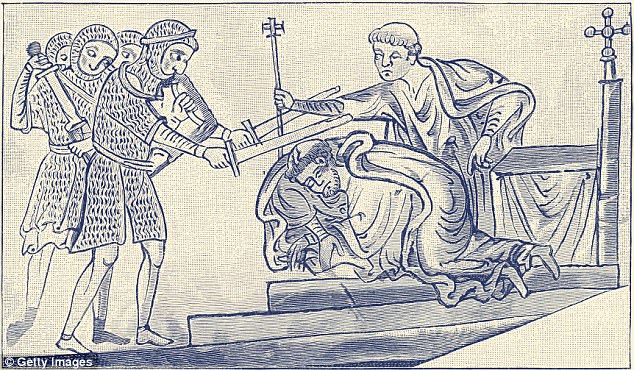 Becket’s death at the hands of the four knights who had listened to the king utter the line ‘Will no one rid me of this turbulent priest’, parodied in the first series of Blackadder

WHAT WAS THE DISSOLUTION OF THE MONASTERIES?

The destruction of English monasteries under Henry VIII transformed the power structures of English society.

Henry had cut off from the Catholic Church in Rome, and declared himself head of the Church of England.

His intention in destroying the monastic system was both to reap its wealth and to suppress political opposition.

Becket’s status as a saint was closely tied up with his defence of the rights of the Church against the encroachments of King Henry II.

Unsurprisingly, his cult became the most high profile casualty of the break with Rome.

A proclamation of 1538 ordered the obliteration of his name and image from liturgical books and ecclesiastical buildings.

His tomb was smashed to bits, but the exact fate of his bones remains a mystery.

Becket was one of the most important figures in medieval Europe and was believed to have died valiantly as a martyr.

He was murdered by the knights of his former friend, King Henry II, while defending the rights of the Church.

After his death he was quickly honoured as a saint, and was adopted as the patron saint of London, the city of his birth.

A memorial of ‘unparalleled splendour’ was erected within the Trinity Chapel at Canterbury.

However, in the 1530s, the Reformation in England saw the ornaments and riches of thousands of Catholic churches destroyed in a vast Protestant movement.

In 1538, at Canterbury Cathedral, the revered shrine succumbed to this fate when it was destroyed on the order of King Henry VIII during the Dissolution of the Monasteries – one of the major outcomes of the English Reformation.

This set of administrative and legal processes between 1536 and 1541 saw the legendary king break England and Wales away from the Catholic church.

The dissolution was the consequence of the king’s conflict with the Roman Catholic Pope Clement VII over the former’s right to marry.

THE BECKET DISPUTE: ‘WHO WILL RID ME OF THIS TURBULENT PRIEST?’ 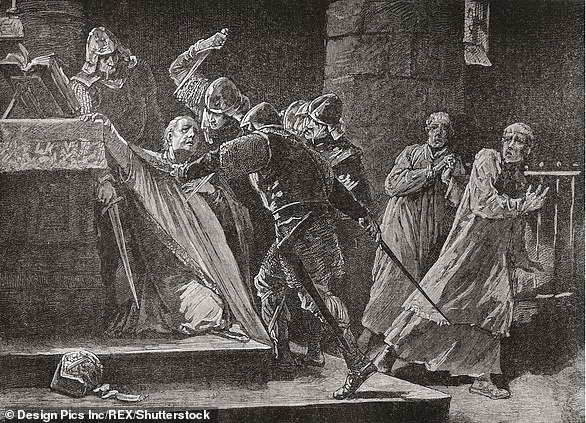 Pictured, an artist’s impression of the murder of Thomas Becket on December 29, 1170

Thomas Becket first rose to prominence at the start of Henry’s reign, when he was put forward by the then Archbishop of Canterbury, Theobald, for the office of Chancellor.

Becket rapidly became Henry’s confident and close friend — with the King manoeuvring Becket into the role of Archbishop on Theobald’s death.

However, the dedicated Becket began to clash with the headstrong King in his new role, leading to animosity.

Following a dispute over the crowning of Henry’s son by the Archbishop of York, Gilbert Foliot — rather than Becket — the latter excommunicated three of his enemies, Foliot included.

This so enraged the King, he is popularly alleged to have uttered the infamous words: ‘Will no-one rid me of this troublesome priest?’

These rash words inspired four of Henry’s knights to ride from the court to Canterbury, where they murdered Becket on December 29, 1170, during an effort to coerce him to return to face the King.

Becket became an instant martyr, and the murder of Becket overshadowed the remainder of his reign.