Astronauts were woken during the night to continue the hunt for an air leak on the International Space Station (ISS).

Crew members have been hunting for the source over several weeks.

But the search was stepped up a notch when the size of the leak appeared to grow on Monday; this erroneous reading turned out to have been caused by a temperature change onboard the ISS.

Analysis by ground teams traced the leak to the main work area inside a Russian ISS module called Zvezda.

Further analysis will be necessary to pinpoint the precise area from which air is escaping.

Nasa stressed that it posed no immediate danger to the crew at the current leak rate and will only cause a slight deviation to the crew’s ongoing work schedule. 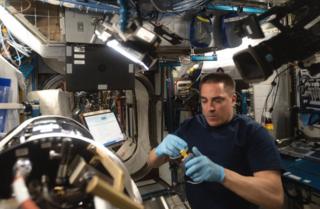 Nasa astronaut and station commander Chris Cassidy and Russian space agency (Roscosmos) cosmonauts Anatoly Ivanishin and Ivan Vagner were instructed to move into the Russian segment to collect data at various locations in the Russian modules.

One by one, the crew closed hatches between Zvezda’s aft and forward sections, along with passageways to other compartments and modules, while using an ultrasonic leak detector to collect data.

It was the third time in just over a month that the crew had to isolate themselves on the Russian side, in an attempt to find the growing leak.

Throughout the night, pressure measurements were analysed to try to isolate the source of the leak. When the overnight checks were complete, the crew opened hatches once again between the US and Russian segments of the station, resuming their normal activities.

It’s not the first time ISS crew members have found themselves hunting a leak.

In August 2018, astronauts discovered a 2mm drill hole in part of the Russian Soyuz spacecraft docked to the space station at the time.

The hole, along with drill marks nearby, appeared to have been a manufacturing defect. Crew members patched it up with epoxy resin for the remainder of the time the Soyuz was docked to the space station.

crew, Space, station, to, up, woken
You may also like: